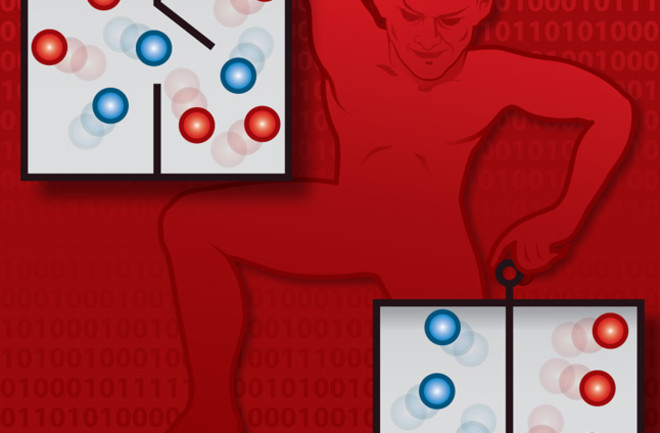 A research team at the University of Maryland has published a mathematical model that could turn Maxwell's dream of order into a reality.  | Jay Smith/Discover

Things get messier: Your office, the universe, even the air and dust in a room will become increasingly disorganized unless you or some cosmic force expends energy to clean it all up. This pesky fact of life — that disorder, or entropy, increases over time — is known as the second law of thermodynamics.

In the 1860s, physicist James Clerk Maxwell floated the idea of a hypothetical “neat-fingered demon” who could break the law by sorting hot and cold gas particles without expending energy, effortlessly flicking open a door between two compartments in a box.

A century and a half later, a research team at the University of Maryland has published a mathematical model that could turn Maxwell’s dream of order without effort into something real. The machine they envision could transfer hot and cold particles between two chambers, thus decreasing entropy, just as Maxwell had imagined.

Yet the device would obey the second law of thermodynamics because it would be self-contained, with no need for an outside power source. Instead, it would need only a supply of bits — 0s and 1s — with which to encode information about the particles.

“That was the missing piece of the puzzle,” says team member Dibyendu Mandal, now at the University of Colorado at Boulder. The increased entropy within the device’s memory more than compensates for the decreased entropy in the air molecules. Not so devilish after all.

If such a machine could increase order without outside power, could it be an infinite supply of energy? Maybe, Mandal says, but not anytime soon. It would need about 200 exabytes (about 200 million terabytes) of data to heat a gram of water by just a single degree Celsius — an overwhelming demand for data storage.

But a realization of Maxwell’s fantasy could be applied on a smaller scale, such as studying elementary particles or separating isotopes for medical uses. Such a machine could even help scientists attain the seemingly impossible feat of reaching absolute zero. That’s pretty cool.

[This article originally appeared in print as "Conquering a Demon."]