Comet ISON Set to Survive Its Pass By the Sun 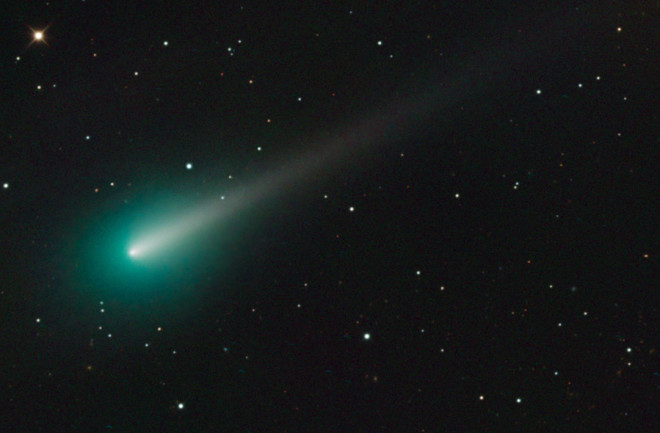 Comet ISON on the morning of Oct. 8, seen with the 0.8-meter Schulman Telescope at the University of Arizona SkyCenter atop Mount Lemmon. Credit: Adam Block / CaelumObservatory.com While most Americans are looking forward to November 28 this year to (over)indulge in turkey and gratitude, astronomers have another reason to count down the days. That’s when Comet ISON, the Great Comet of 2013, will reach its closest approach to the sun (1.7 solar radii from the solar surface, or about 700,000 miles). Only then will they know for sure whether the comet will survive its close encounter and go on to provide spectacular views for skywatchers on Earth.

According to a presentation yesterday at a Denver meeting of the Division for Planetary Sciences of the American Astronomical Society (and an upcoming paper), Comet ISON’s future looks bright. Numerical simulations show that its size and density should allow it to escape the sun’s intense heat and gravity without vaporizing or breaking up — a fate that often befalls such “sun grazing” comets. This is great news for anyone hoping to catch a glimpse of Comet ISON in the night sky. Because of ISON’s orbit, the best views will occur after perihelion, its closest solar approach. Surviving that milestone practically ensures months of uninterrupted observations of the snowy dirtball. Of course, you never know. Another study from last week uses detailed observations of ISON’s light to show just the opposite, that the comet will soon “turn off or disintegrate.” And any number of other unknowns — an unusually strong outburst caused by solar heating, say, or a chance collision with an undetected smaller object — could also make ISON’s first pass by the sun a one-way trip.

Look on the Bright Side

But even if the comet disintegrates, there should be plenty of science to do. ISON represents the first time researchers have watched a 'dynamically new' comet — a pristine, first-time visitor from deep space that will not return — on course to pass very close to the Sun.

And they’re ready. The long lead-time astronomers have had since ISON’s September 2012 discovery (usually they spot sungrazers just weeks ahead of their perihelion) has ensured steady and sustained observation, including from Mars’ orbit just a few weeks ago. Of course, while professionals might be okay with ISON’s potentially doomed fate, amateur astronomers (and publicationsthatcater to them) would likely hate to see the “Comet of the Century” fizzle out. It already looks like the comet can't live up to the initial hype. But, assuming it survives its Thanksgiving visit, ISON could still make for a beautiful sight in the nighttime skies for months to come. [For more on the science behind ISON, check out our November story about it. And Astronomy magazine has some viewing tips to spot the comet yourself.]