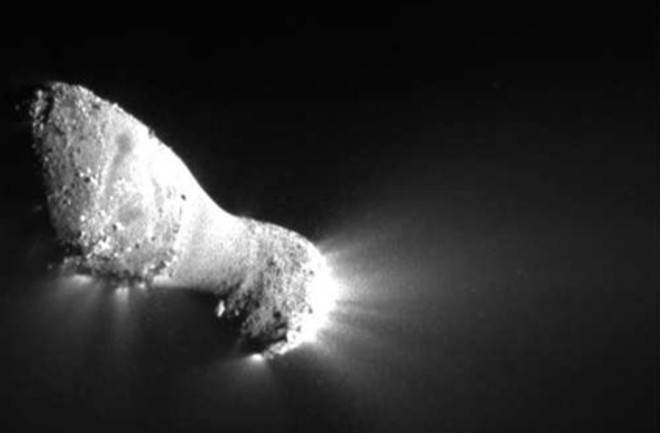 This morning, NASA’s EPOXI mission whizzed by the comet Hartley 2, coming as near as 450 miles to the comet at 8 a.m. and snapping pictures all the while. The icy comet is less than a mile in diameter and has an irregular shape that one NASA researcher recently described as "a cross between a bowling pin and a pickle." The images are already streaming in: Head to Bad Astronomy for more pictures and a discussion of what these snapshots tell us about Hartley 2. This is the second cometary encounter for this spacecraft--under a previous mission called Deep Impact the spacecraft sent an impactor hurtling into the comet Tempel 1, allowing the craft to photograph the excavated debris and the impact crater. Related Content: 80beats: Holy Hartley 2! What to Know About NASA’s Comet Flyby 80beats: Video: Comet Caught Crashing into the Sun 80beats: Spacecraft-Collected Comet Dust Reveals Surprises From the Solar System’s Boondocks Bad Astronomy: Ten Things You Don’t Know About Comets DISCOVER: NASA Takes a Wild Comet RideImage:NASA