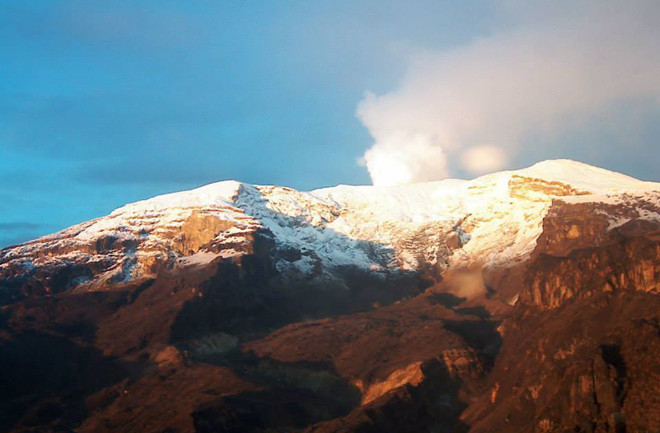 A steaming Nevado del Ruiz in Colombia, seen on May 23, 2014. Image: SGC/Observatorio Vulcanológico y Sismológico de Manizales. Busy this week hosting guests, so a brief update on what's been rumbling in Colombia over the past few weeks. First off, it has been awhile since I mentioned the seismic swarm ongoing at Chiles and Cerro Negro on the Colombian-Ecuadoran border. Over 6,600 earthquakes have been recorded over the past few months, all at depths between 2-5 km. Combined that with deformation of the volcano starting last November, and it seems relatively clear that new magma is intruding beneath Chiles and Cerro Negro. Now, this doesn't mean that an eruption will occur -- intrusions of magma occur frequently at volcanoes without any eruption. However, the activity has been substantial enough (earthquakes reaching M3-4) and sustained, so El Servicio Geologico de Colombia (SGC) has put the area on a Yellow Level III status. The volcanic complex is better known (at least via the Smithsonian Global Volcanism Catalog) as Cerro Negro de Mayasquer. Both volcanoes show evidence of hydrothermal activity like steam vents and hot springs, but their eruptive histories are enigmatic. Cerro Negro may have erupted in 1936, but that eruption looks to be questionable in its accuracy. Chiles likely hasn't erupted in tens of thousands of years, but the presence of steam vents definitely suggests it can still be considered a potentially active volcano. Nevado del Ruiz has been steaming away as some of the images posted by the Volcano Observatory in Manizales can attest, with a plume reaching upwards of 1.5 km (~4900 feet). Seismicity continues to be elevated, especially under the Arenas crater. This unrest leaves Ruiz at Alert status Yellow Level III. Likewise, nearby Cerro Machín has also been rumbling and over this past week, the dome cluster experienced a M3.1 earthquake at a depth of ~4 km. SGC said the earthquake was likely caused by rock fracturing due to magma or fluid movement beneath Machín, so the alert status there remains at Yellow Level III. Sotará has also continued to experience heightened seismicity and deformation over the past month. SGC has also installed a new webcam pointed at Sotará to keep an eye on the volcano. In fact, the Volcano Observatory in Popayán has added a pile of webcams to watch other volcanoes in central Colombia including Sotará, Huila (also on Yellow Level III) and Puracé.