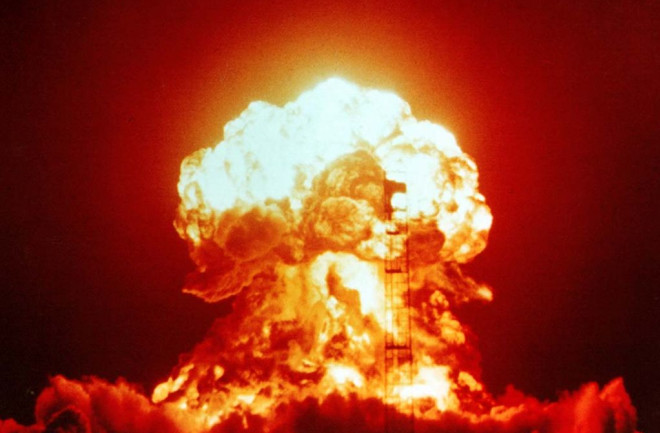 (Credit: Wikimedia Commons) Up until 1963, both the U.S. and Soviet governments conducted over 500 atmospheric nuclear weapons tests. They blew up these weapons anywhere from 16 miles above Earth to 250, well into space. The resulting fallout is estimated to have raised levels of thyroid cancer across the country, and could one day even serve as a marker for the Anthropocene—the age of humans. But the effects of these tests spread far beyond the surface of the Earth. A nuclear explosion creates a storm of charged particles similar to those emitted by the sun, with the added benefit (to scientists) of being created right near us. Researchers recently discovered that the particles from nuclear tests were lofted into belts circling the Earth, causing geomagnetic storms and even damaging a few satellites. Led by a scientist from the University of Michigan, the researchers say that the plasma created in the explosions interacted with the planet's magnetic field and created an artificial version of the Van Allen belts that encircle the Earth. https://www.youtube.com/watch?v=N-00HHGQbp0 These belts are formed when particles emitted by the sun get caught up in our magnetic pull and form eddies around the Earth. Particularly strong waves of particles can interfere with communications satellites and even knock out power grids on Earth — one uncommonly potent storm in 1859 even caused sparks to fly from telegraph machines. The nuclear explosions, harnessing the same fusion that takes place in the sun, caused similar phenomena temporarily. For a time, the researchers say, the particles from the blasts formed belts of charged particles around the Earth, lasting weeks or even years. The recently declassified results were published in Space Science Reviews. Though these belts are invisible to the naked eye, the Teak nuclear bomb test near Hawaii was reported to have spawned auroras as far south as Western Samoa. A different explosion let them see how fast the particles traveled, in once case as fast as 1,860 miles per second. The tests gave researchers a rare chance to study the interactions of these charged particles with the Earth in a controlled way, which could help give insights into how electromagnetic storms may affect us in the future. Bonus finding from the paper: Some types of radio waves act to create a kind of shield around the Earth that protects us from harmful radiation. Very Low Frequency (VLF) waves, the kind used to communicate with submarines, created by humans seem to push back the Van Allen belt at times by changing how the charged particles move. The VLF waves propagate outward into space and serve to deflect high-energy particles that could cause harm to organic life, a potentially beneficial finding for researchers attempting to protect human spacefarers from cosmic radiation.