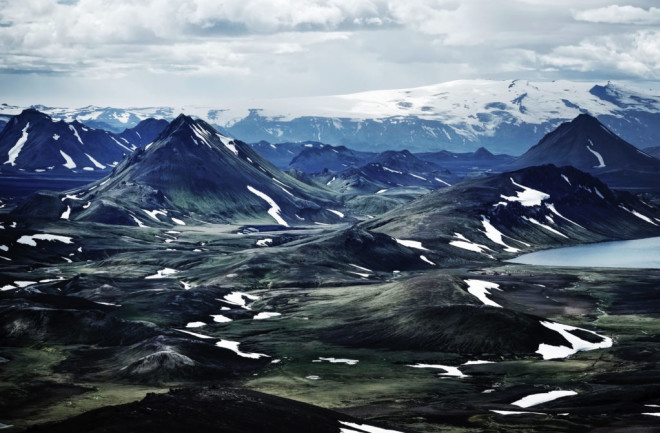 Alamy Last night, a brief earthquake swarm rattled the caldera at Katla in southern Iceland. The largest earthquakes were over M4, ranging from a few kilometers deep to near the surface (although the depth locating is likely problematic for many of the smaller earthquakes). These M4+ earthquakes (see below) are the largest temblors to occur to Katla since 1977 (note: those earthquakes did not lead to any eruption). However, although a few of the earthquakes were fairly large, the swarm seems to have petered out quickly as seismicity returned to background levels by Icelandic morning. The Icelandic Meteorological Office is reporting no tremor recorded currently at Katla, which suggests that at least for the moment, no magma is making its way to the surface. Icelandic officials have not changed the alert status for Katla from normal at this point. UPDATE 8/29 at 8 PM EDT: The IMO has now reported that flow in the  Múlakvísl River, which flows out from under Mýrdalsjökull, has increased and has high concentrations of sulfur dioxide and hydrogen sulfide. Both of these are common gases related to hydrothermal fluids (heated from magmatic sources). This is a common occurrence when earthquake swarms have disturbed the Katla caldera and is not likely directly linked to any change in eruption likelihood.

The earthquake swarm that occurred on the night of August 29 at Katla in Iceland. The green stars are earthquakes over M4.Icelandic Met OfficeTwo big hazards exist at Katla right now. One is obviously that the volcano might have its first eruption since 1918. That lack of harmonic tremor means that the likelihood of an imminent eruption is low. The other hazard might be a jökulhlaup, or glacial outburst flood. Melting from the summer within the Myrdalsjökull icecap and that meltwater can accumulate until it spills over as a flood of water, ice, and debris. These have occurred often and do not need to be associated with any volcanic activity. Katla has experienced numerous earthquake swarms in the 98 years since its last eruption, most recently in 2011. So this new one, even with its larger earthquakes, is no reason for immediate alarm. Katla does have a history of large, explosive eruptions, which means it makes people nervous. Keeping an eye on any restlessness at the behemoth is vital for both the people of Iceland and for air travel across the North Atlantic.