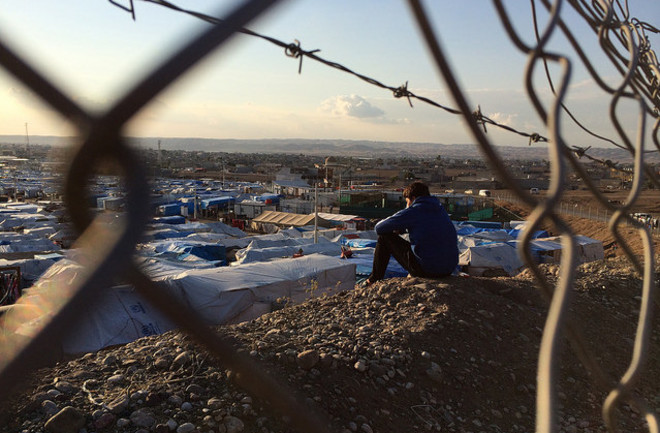 A refugee camp in the Kurdistan region of Iraq (Photo Credit: Flickr EU/ECHO/Caroline Gluck/CC BY-ND 2.0) By analyzing images taken during times of humanitarian crises, citizen scientists can help refine a tool for data analysis improve relief efforts.A guest post by Megan Passey and Jeremy Othenio. Edited by Arvind Suresh  In August 2014, following the fall of Mosul in Iraq, the UN declared the situation a level 3 crisis, the most severe type of humanitarian emergency. Iraq was already home to an estimated 1 million internally displaced persons prior to the current crisis, as well as over 200,000 refugees from Syria. During such disasters, there is a massive surge of time-sensitive information that needs to be sifted through. Having a system that quickly examines and produces pertinent data sets from this information could greatly aid humanitarian response efforts. As part of its humanitarian relief and coordination efforts, the United Nation’s Institute for Training and Research (UNITAR) and its Operational Satellite Applications Program (UNOSAT) introduced the GeoTag-X platform: a pilot project designed to research novel and viable means of data collection, while raising awareness to the rather harsh conditions of people caught up in disaster situations. GeoTag-X aims to open the analysis of this information to a wide audience of participants with an interest in humanitarian relief efforts, hoping to minimise the time it takes to find, analyse and provide data with real value. “Emergency Shelter Assessment in the Middle East” is a Geotag-Xproject that has been developed in collaboration with REACH, a joint initiative of UNOSAT and two non-government organisations, ACTED (Agency for Technical Cooperation and Development) and IMPACT, a Geneva based think tank focused on issues related to humanitarian and development policy. Since June 2014, when the surge in violence caused a fresh wave of mass internal displacement across Iraq, REACH has been collecting and analysing primary data on displacement trends, needs and intentions of displaced families in order to inform the humanitarian response. REACH has been conducting regular mapping of displacement sites, which as of February 2015 housed an estimated 226,000 displaced persons in the Kurdistan Region of Iraq alone. While 149,000 of these individuals were staying in formal camps, a further 77,000 were living in informal settlements, staying in tents, makeshift shelters or unfinished buildings. Lacking the financial resources to rent accommodation in the host community, and often without the support from friends or family, displaced families in camps and informal sites represent a particularly vulnerable group. Data collected by REACH includes the mapping of key facilities and evaluating the functioning of basic services within the sites. The information is recorded in camp profiles which provide an overview of conditions in the camp, highlight key gaps in the response, and have already been used to successfully advocate for improved conditions. You can help us test GeoTag-X

Mapping displacement in Iraq (Photo Credit: REACH Initiative) The Emergency Shelter Assessment project on the GeoTag-X platform allows volunteers to evaluate the suitability of emergency shelters in camps and informal settlements. Its aim is twofold: first to see whether the GeoTag-X platform can provide reliable responses to these assessment questions, and second to raise awareness of the difficult situation of those affected by disasters and the work undertaken to help them. The project is comprised of a set of simple questions about photographs taken by REACH data collection teams in Iraq and Jordan. These observation-based questions — an important component of humanitarian assessment — are used to understand people’s needs and vulnerabilities, and are based on global indicators used by shelter actors in a humanitarian response. Data collected from needs-assessments like this help local populations, governments and humanitarian actors plan an emergency response for the benefits of the displaced population. All you need to participate is a PC or tablet connected to the internet. No particular skills are required, just make sure you take the tutorial before starting the analysis. On­e photo takes about 1-3 minutes to complete, therefore analysing photos can take as little or as much time as you want. So when you have a moment, head to GeoTag-X and analyse a couple of photos. Your contribution will help us determine if GeoTag-X could one day become an operational tool for use in field assessments during humanitarian crises like the on-going situation in Iraq.

Megan Passey is a program analyst at the REACH Initiative in Geneva, where she provides information about humanitarian needs in conflict and disaster situations worldwide. Megan trained as an architect in the UK and has previously worked with the Norwegian Refugee Council and UN Refugee Agency.Jeremy Othieno is a GeoTag-X volunteer who has been an active contributor to the GeoTag-X project since March 2015, both as an end-user as well as a software engineer. Jeremy Othieno has a background in Computer Sciences and a love for all things unconventional.