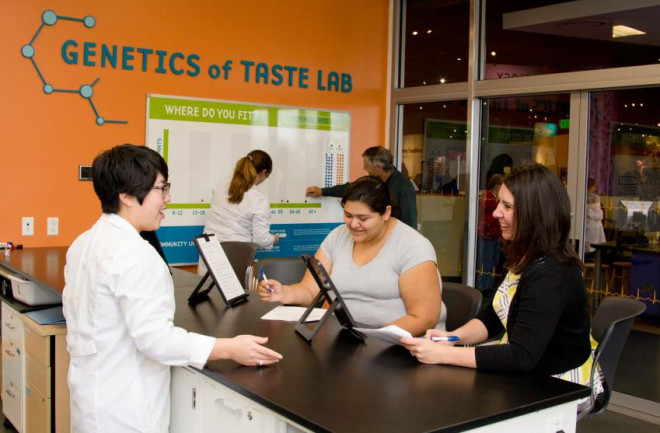 Citizen scientists participate in the genetics of taste lab (Image Credit: Denver Museum of Natural History) Citizen scientists help make discoveries about how genetics may shape the way we taste food.  Turkey or ham? Stuffing or mashed potatoes? Pumpkin or apple pie? As I prepared for Thanksgiving this year, I reflected on all the culinary choices this feasting day offers and wondered why people who share a culture, a community, or a family have such diverse preferences when it comes to their favorite holiday foods. Maybe it’s genetics? Researchers at the Denver Museum of Nature and Science are exploring this question through their Genetics of Taste Lab, a permanent “science on the floor” health exhibit that brings together citizen science and crowdsourcing to understand our relationship with food. Since the exhibit’s opening in 2009, scientists leading the project have explored two research questions and just started working on a third. The goals of the project are to add new scientific insights to the field of genetics, show that citizen science can produce publishable results, and increase the public’s understanding ofgenetics by engaging citizen science volunteers, test subjects, and museum visitors in the research process. So far, about 200 citizen scientists have collected data from thousands of museum visitors from all over the country, and with each new study the volunteers have increased their level of involvement, said Dr. Nicole Garneau, Curator and Health Science Department Chair at the museum and one of the projects’ leads. The project's citizen scientists survey people through taste tests, collect general census information (such as age, race, access to fresh foods, history of smoking, etc.), and administer cheek swabs. They are also trained to educate their subjects about the research process. From 2009 to 2013, citizen scientists with the project conducted the pilot “Bitter Taste Study,” which focused on how changes to the gene TAS2R38 affects how people experience the taste“bitter.“ Data collected from 3,000 museum visitors helped scientists better understand the role of fungiform papillae (which contain taste buds) on the tongue and if the number of fungiform papillae could be used as a metric for predicting sensitivity to a bitter taste called PROP. Analysis also served to debunk a previously held belief that some people are “supertasters,” Gareau said, which is a category used to describe people who are more sensitive to strong flavors. From 2013-2015, citizen scientists with the museum helped design research questions and collected data from 1,200 museum visitors for a second study, the “Fatty Acid Taste Study.” This project asked if humans discern the flavor of fat (also known as oleic acid) the way they discern the flavors of sweet, bitter, salty, sour, and savory. Understanding how we relate with oleic acid could have implications for health, said Dr. Robin Tucker, Assistant Professor in the Department of Public and Allied Health at Bowling Green State University and another lead with the museum project. “By better understanding the taste of fat, we might be able to develop low-fat products that people enjoy consuming because we will get the ‘taste’ of fat right,” she said. Data from the project indicated that people do taste fat, and it also suggested that someone’s body fatness does not predict their sensitivity to the flavor of fat, Tucker said. “Previously we thought that overweight or obese people would be less sensitive to fat tasteand therefore consume more fat,” Tucker said. “Our study suggests there are other factors at play.” The first published results of the study appeared in the October 2015 issue of the leading journal Chemical Senses, published by Oxford University Press—illustrating that citizen science can add new insights to the field. Data collection for the “Fatty Acid Taste Study” ended in August and scientists are now analyzing tissue collected through cheek swabs to see if genetics can help explain the differences in people’s ability to detect oleic acid, Garneau said. The Genetics of Taste Lab team just launched its third study, which looks at differences in how much people enjoy different sweet flavors and also how intensely they experience the flavors, Garneau said. In response to feedback from citizen scientists, this study will only run for nine months and (thanks to an idea from a volunteer who is a retired dentist) will also include an analysis of the bacteria present in the mouths of study participants, Garneau said. Citizen scientists are taking the lead in other ways as well. University students involved with the project are mentoring other volunteers in tasks as complex as 2PCR DNA tests, Garneau said. Others serve as ambassadors for the project and educate the public about their research. Even youth (who cannot conduct the tests until they are 18) help with supportive tasks until they are old enough to become certified to administer tests. “It’s been really sweet to watch them be so involved and so dedicated that they come to the museum on the day of their 18^th birthday so they can be certified,” Garneau said. The project has been so successful that researchers in other parts of the country are using it as a model, Garneau said. To better understand this success, the team is searching for funding to do a study of their project to measure how effective citizen science can be at educating the public. Stay tuned!