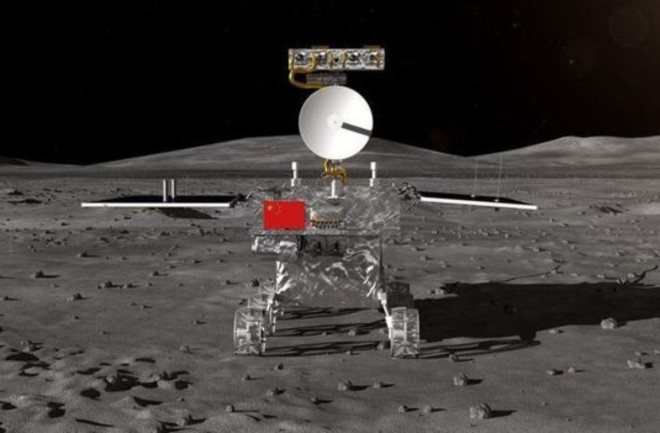 An artistic representation of the Chang'e-4 rover on the far side of the lunar surface. (Credit: CNSA)

Landing on the Far Side

Nearly a month after launching from Earth, China’s Chang’e-4 mission is set to make a historic lunar landing, according to news reports. The spacecraft's exact landing time has not yet been specified. But, if all goes according to plan, the craft will be the first in history to land on the far side of the moon either today or tomorrow (January 3). The spacecraft is currently orbiting about 9 miles (15 km) above the lunar surface. The craft is prepared to touch down in the Von Kármán crater, named after the Hungarian-American aerospace engineer, mathematician, and physicist Theodore von Kármán. This crater spans a whopping 110 miles (186 km) and is located inside of the South Pole-Aitken (SPA) basin, a much larger impact crater. A first in the history of human space exploration, this landing will also be a significant accomplishment for the Chinese space program, and should give researchers around the world a trove of new data about an unexplored region of the moon.

While this mission is historically significant, it will also collect unique data that could inform our understanding of the early solar system. Scientists think the collision that carved out the massive, 1,550 mile (2,500 kilometer)-wide SPA basin hit the moon with enough power to break through the crust all the way to the lunar mantle. By exploring the crater with the Chang'e-4 rover, researchers hope to better understand both the collision and the mantle itself. The mission will also explore the lunar regolith, or rock and dust on the moon's surface, to better understand how our rocky satellite formed. The Chang'e-4 mission's lander will carry two cameras, a radiation experiment, and a spectrometer that will make radio astronomy observations of the lunar surface. In addition, a relay communication satellite, Queqiao, will connect the mission team on Earth to the Chang'e-4 mission's lander and rover that will explore the lunar surface. The far side of the moon offers a unique opportunity for scientific research. Because it's shielded from the radio "noise" coming from Earth, scientists expect the far side of the moon to be ideal for radio astronomy. "Astronomers like the radio quietness of the far side and dream of an observatory," Jim Head, a researcher at Brown University who worked with Chinese colleagues to analyze Chang'e-4's landing site, said in an email. Because the far side of the moon remains relatively untouched, there is much that we don't know. The lunar crust there, for example, is thicker, something we have no explanation for yet. Lunar mantle, or material from the moon's deep interior, could be on the surface of the SPA basin as well. "The lunar farside is 'Luna Incognita' and unvisited by surface landers and rovers, so any reconnaissance exploration will be of interest," Head said. This groundbreaking exploration will inform and shape our understanding of not only the moon but the entire solar system. "The moon is a cornerstone for understanding the other terrestrial planets and understanding the generally unexplored lunar farside can only help in our understanding of the history and evolution of Mercury, Venus, Mars and our home planet, Earth," Head said.