China Prepares to Head for the Far Side of the Moon 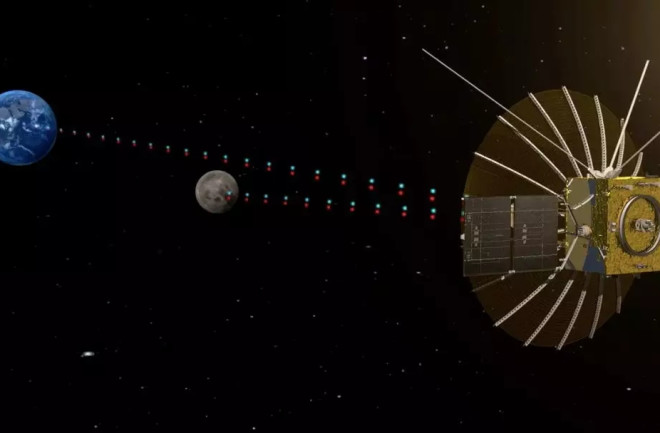 A visualization of the Queqiao Chang'e-4 lunar satellite that will relay communications between the lander-rover on the lunar surface and mission operators on Earth. (Credit: Chinese Academy of Sciences)

Tomorrow, at about 1:30 p.m. EST (2:30 a.m. on Dec. 8 local time), China’s robotic Chang'e-4 mission will launch on a Long March 3B rocket, headed for the lunar surface. After launching, the spacecraft will spend 27 days traveling to the moon. Upon arrival at our rocky satellite, an accompanying lander, which doubles as a rover, will descend towards the surface. The craft will touch down in the Von Kármán Crater in the South Pole‐Aitken (SPA) basin on the far side of the moon. In anticipation of the launch, China sent their Queqiao relay satellite into space this past May. This satellite is positioned at the L2 Lagrange point, one million miles from Earth. Lagrange points are positions in space where a small object (the satellite, in this case) is gravitationally balanced between two large objects (the moon and the Earth, in this case) and will remain in place relative to them. Here, the satellite will be able to constantly transmit communications between mission controllers on Earth and the lander-rover on the lunar surface.

This mission, besides being a major first for the China National Space Administration, aims to explore and study both the surface and subsurface of the lunar region. The mission will include a low-frequency radio-astronomical study of the lunar surface, a shallow exploration beneath the surface, and a study of the topographical and mineralogical composition of the SPA basin. The radio frequency instrument is of special significance because of its location. The lander's home base always faces away from Earth, so a detector there will not likely pick up human-made radio frequencies and “noise” from auroras on Earth which could affect data. The lander-rover will also use its Lunar Penetrating Radar (LPR), one of the eight scientific payloads on board that were described in the paper, to sample the lunar surface and what lies directly beneath. In this study, the instrument will examine the thickness and structure of the regolith, or lunar soil, in the region around the landing site. Additionally, according to a story by Xinhua, China's state-run news agency, the mission will also include a biological investigation consisting of a tin full of seeds. This tin will contain water, a nutrient solution, air, a small camera, a data transmission system, and potato and arabidopsis seeds (arabidopsis is a small flowering plant related to mustard and cabbage). Researchers hope to see whether these seeds blossom and grow on the moon.