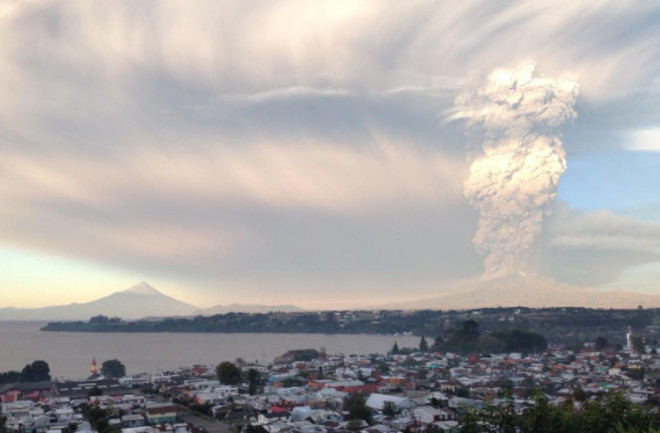 The eruption of Chile's Calbuco on April 22, 2015 with Puerto Varas in the foreground Julio Del Rio C. (used by permission) What has been a relatively quiet year volcanically in Chile (beyond Villarrica) came to an abrupt end today when Calbuco produced an impressive explosive eruption that towered over the city of Puerto Montt. Calbuco, in southern Chile, hadn't erupted since 1972, but the volcano unleashed a towering ash column after very little warning (somewhat similar to Chaiten's 2008 eruption). The plume may have reached as high as 20 kilometers (65,000 feet - N.B., this height still isn't confirmed, although the Buenos Aires VAAC has the plume ash reaching ~10 km / 33,000 feet) above sea level and pyroclastic flows enveloped the top of the volcano. With its proximity to Puerto Montt, Calbuco is an especially hazardous volcano, not only because of potential ash fall but also lahars generated from melting snow/ice mixing with the volcanic debris from the eruption itself. UPDATE 10:00 PM EDT: The SERNAGEOMIN tweeted that there is a seismic signal currently suggesting that lava is erupting from the main vent of Calbuco. This pattern of explosive eruption followed by lava flows is similar to what was seen in 2011 at Puyehue-Cordon Caulle. UPDATE 10:20 PM EDT: And there it is, first images of the lava in this eruption. Also, check out this timelapse as well. And this video, with an aircraft of some sort near the Calbuco plume. The eruption was caught on video by people living in and around Puerto Montt, so there are some great sequences showing the opening salvo from the eruption as the plume was still rising convectively. As some of the later images show, the plume then spreads out as it reaches neutral buoyancy and spreads in the prevailing winds -- a classic Plinian column. UPDATE: Be sure to watch the timelapse videos of the eruption that really capture the pulsating nature of these explosive eruptions. Each pulse pushes more ash skyward, supporting the growing ash column. The SERNAGEOMIN (Chilean Geological Survey) and ONEMI (the Chilean Emergency Management Agency) have declared a 20 kilometer exclusion zone around the volcano as the volcano was raised to red alert status. So far, 1500 people living near Calbuco have been evacuated. This eruption was unexpected as the volcano was on green alert status (lowest) until a volcanic tremor swarm began in the mid-afternoon today at the volcano. Within as little as 15 minutes, the eruption commenced. This suggested rapid ascent of magma from its source under the volcano but as the intensity of the eruption appears to have waned as nightfall arrived.

GEOS-13 satellite image of the plume from the April 22, 2015 eruption of Calbuco NOAA (courtesy of Dan Lindsey) The eruption was caught by GOES-12 satellite as a bump on the edge of the planet, showing just how impressive this ash plume was. You can also check out a cool GEOS-13 satellite loop that shows the eruption starting, with the warmer cooler indicating a taller (and cooler) top of the plume, along with a great shot of the plume before sunset in Chile from the same satellite (see above). There is a webcam pointed at Calbuco, so you can try to check out the eruption (if the webcam loads depending on traffic). More updates as information comes out from this impressive eruption in Chile.