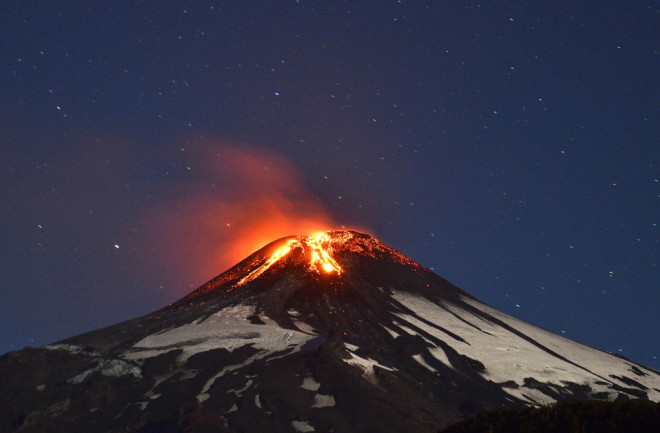 Villarrica volcano, in southern Chile, which began erupting on March 3, 2015.

Ariel Marinkovic/AFP/Getty Images Early this morning, Villarrica in Chile produced a spectacular eruption that sent a lava fountain hundreds of meters over the volcano's summit crater (see above). The eruption spread ash over the neighboring region and an accompanying lava flow melted snow on the slopes of the volcano (see below) creating some small volcanic mudflows and debris flows. Currently, over 3,300 people have been evacuated from the small towns around Villarrica, including the vacation town of Pucón. The eruption started at ~3 a.m. (local time) and TV footage showed the deluge of lava bombs that rained down on the slopes during the peak of the eruption. The timelapse video (see below) taken by POVI shows the progression of the eruption from small explosions to the full on lava fountaining.

The slopes of Villarrica after the March 3 eruption, with dark grey volcanic tephra, along with mudflows produced by lava fountaining and flows. Photo by Carabineros de Chile / Twitter. This eruption wasn't entirely unexpected -- over the last few weeks the volcano had been seeing increasing signs of unrest including much more activity from the summit vent. Normally a lava lake resides at Villarrica's summit (one that you could hike to and see when conditions were right) but recently the volcano had started throwing bombs and scoria out and covering the top of Villarrica with dark grey volcanic debris. This new eruption was much more impressive than that, with a towering lava fountain producing an ash plume that reached a few kilometers above the volcano. By the time dawn broke (see below), the current eruption had ceased, but glowing lava and a thick cover of dark grey volcanic debris blanketed Villarrica. Seismicity remains high under Villarrica even after the eruption, suggesting that we likely have no seen the end of this unrest.

Villarrica seen in the morning after the March 3 eruption. Lava flows and bombs glow at the summit of the volcano. Photo by Amanaturalis / Twitter. Although Villarrica has produced a multitude of small eruptions over the past few decades, this is the most vigorous in at least 20 years. The eruption itself is very similar to one we saw at Villarrica's neighbor, Llaima, in 2009 (along with other volcanoes like Villarrica, including Italy's Etna.) These lava fountains are typical for strong strombolian style eruptions where gas-charged basaltic lava erupts vigorously, creating the fountaining that sends lava hundreds of meters upwards. As that vigor wanes, lava flows continue with new basaltic lava. Villarrica has four webcams pointed as its slopes, so if activity resumes, you can be sure to be able to catch it there.