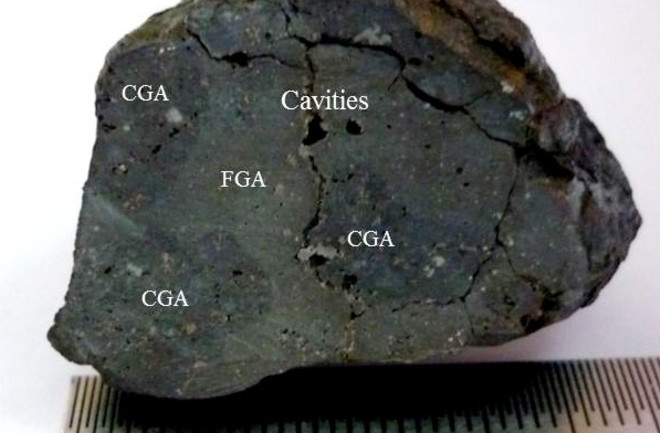 Fragment of Chelyabinsk meteor currently being analyzed for mineral composition and signs of previous melting. Credit: Victor Sharygin. The meteor that starred in a thousand and one tweets as it shot across the Siberian sky last February apparently had a rough history. The Chelyabinsk meteor, estimated to have been 55-65 feet in diameter before breaking up, may have had previous fiery encounters — either colliding into another body in the solar system or traveling too close to the Sun — before its spectacular crash to Earth, according to analysis of fragments from its crust and interior.

Presenting the new findings at a geochemical conference today in Florence, Italy, Victor Sharygin of Novosibirsk's Institute of Geology and Mineralogy said a detailed mineral analysis of fragments of the meteorite revealed some anomalies suggesting the rock had previously been melted. Dividing the pieces into different gradations of color and structure, the team identified a concentration of dark fragments composed of fine-grained material formed by extremely intense melting. The dark fragments were distinct from the meteorite's fusion crust, a thin layer that melts and then solidifies as the rock travels through Earth's atmosphere. The dark fragments' structure included what the team described as "spherical bubbles," either encrusted with oxide, silicate and metal or filled with metal and sulfide.

The fusion crust, noted the team, included small amounts of platinum group elements so far identified only as an alloy of osmium, iridium and platinum — an unexpected finding because the process of fusion crust formation is usually too fast for the elements to accumulate. Along with the dark fragments' unusual composition, the strange elements present in the fusion crust could point to the rock melting and re-solidifying in a previous collision, or in a trajectory that took it close to the Sun. The team sent some of the fragments to researchers in Moscow to be dated, which could provide a timeline for the possible collision or near-miss.

The Chelyabinsk meteorite is classified as an LL5 chondrite, which means it has relatively low iron and metal content. As it passed through Earth's atmosphere, it was considered bright enough to be rated a superbolide with an apparent magnitude of more than -17 — more brilliant in the sky than the Sun. The team plans to analyze larger pieces of the meteorite when they are brought up from the bottom of Chebarkul Lake, where they fell following the superbolide's blaze of glory. The recovery process has been hampered by the remains of the meteorite being buried in more than ten feet of mud at the lake bottom. Sharygin spoke about the ongoing analysis of the Chelyabinsk meteorite at the Goldschmidt Conference, an annual event held by the Geochemical Society and the European Association of Geochemisty.