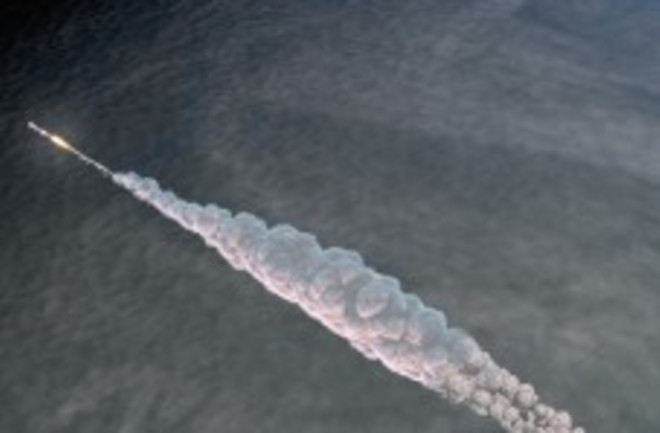 A 3-D simulation shows the Chelyabinsk airburst, or aeiral explosion, over southwestern Siberia on Feb. 15, 2013. Credit: Andrea Carvey, Mark Boslough & Brad Carvey. What’s great about astronomy is it doesn’t just answer some of the biggest questions (How old is the universe?Can life exist on other planets?What’s the prettiest planet in the solar system?) — it also has a few practical applications, too. As the residents of Chelyabinsk, Russia, found out last Feb. 15 when a large space rock exploded overhead, not knowing what’s going on in the skies can be pretty harmful. And, thanks to that very rock, we now have an even better understanding of what happens when space attacks.

In case you missed it, the Chelyabinsk meteor was quite a show: the largest airburst, or aerial explosion, since the 1908 Tunguska event (also likely caused by a space rock). But unlike that isolated blast, the Chelyabinsk pyrotechnics occurred in a populated area. The explosion’s shockwave destroyed thousands of buildings and injured more than 1,500 people, but luckily no one died (keeping alive humanity’s impressive streak of no space rock-inflicted deaths). And, this being the future and all, many of those people had cell phones and dash cams to record the whole brilliant event. Thanks to all that data, three papers out this week (one in Science and two inNature) provide significant insight in to the space rock in question and how to approach similar ones in the future. By analyzing the multiple explosion and shockwave recordings, the researchers determined that the main explosion, in midair, occurred at an altitude of about 55 miles, but the blast’s shockwave was still strong enough to knock people to the ground. At peak brightness, the meteor appeared 30 times brighter than the Sun. It was about 18 miles high at that point, traveling at about 11.6 miles per second, or more than 40,000 miles per hour. (Scientists already had estimates for some of these figures, but the new papers provide a much greater level of accuracy to the calculations.) Overall, the event had the equivalent energy of 500 kilotons of TNT. Not bad for a 30 million-pound hunk of stony rock about 65 feet in diameter.

The main mass of the space rock behind the Chelyabinsk meteor was photographed shortly after its recovery from Chebarkul Lake. Credit: Andrey Yarantsev/Science/AAAS As for that rock, it’s almost certainly a kind of asteroid astronomers call an LL chondrite, a subclass of the most common type of meteorite (defined as any kind of space rock that lands on Earth). That means the odds are good that, if we’re ever facing down a looming asteroid threat, it’ll be from the same kind of rock, so the more we know about how these things behave, the better. In fact, one of the papers showed that current models for predicting damage from them was way off — rocks this size may be 10 times more dangerous than previously thought. But don't worry too much. Sure, an asteroid could come crashing down on your head tomorrow, but that’s pretty unlikely. And should the unlikely occur, and a similar asteroid is detected heading toward Earth, these details on how it'll break up in the atmosphere and what kind of energy it'll expend will help the authorities minimize the damage. And one of the most interesting new bits of trivia? The Chelyabinsk meteor's long-lost twin. Fellow close-orbiting asteroid 86039 (1999 NC43) shares an orbit and makeup so similar that it’s likely the two were once part of the same object, broken apart long ago. Thus, from something that showed up uninvited over Russia’s skies less than 9 months ago, scientists can now tell the tiniest details about its history. Awe-inspiring and useful — that's astronomy for ya.