During its surprise appearance the fireball was brighter than the sun. 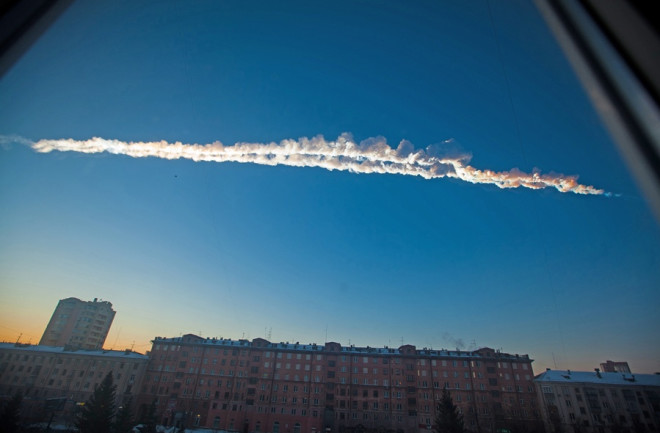 A meteor streaks across the sky over Chelyabinsk, Russia, in February, injuring hundreds. AP Photo/Chelyabinsk.ru/Yekaterina Pustynnikova

At about 9:20 a.m. local time Feb. 15, a fireball brighter than the sun streaked across the sky near Chelyabinsk, Russia, in southwestern Siberia. It exploded half a minute later, creating a powerful shock wave that destroyed about 4,000 buildings and shattered some 328,000 square feet of windows. Flying glass injured more than 1,500 people.

The destruction was the result of a small asteroid that entered Earth’s atmosphere over the Russia/Kazakhstan border, about 60 miles south of the city. The intense heat generated by its 42,000-mph free fall caused it to blow up in midair; much of the explosion’s energy struck Chelyabinsk, 14.5 miles below.

After reviewing the space rock’s speed and other data, NASA researchers estimated that its energy was equivalent to nearly 30 Hiroshima-style atomic bombs. They estimate the asteroid measured about 59 feet in diameter and weighed 11,000 tons.

NASA, which tracks asteroids passing close to Earth through its Near-Earth Object Observations Program, traced the fireball’s path, revealing that it truly was the result of an errant asteroid and not a comet or other space debris.

Most asteroids lie in a “belt” between Mars and Jupiter, but as this one proved, they can be dangerous if they get close enough. Luckily, the longest lasting effects of this close planetary shave (the most destructive since the Tunguska impact of 1908) may just be a renewed public focus on dangerous space rocks.

[This article originally appeared in print as "To Russia From Above."]