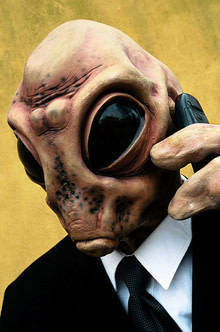 The thought of deciphering alien gossip might sound straight out of sci-fi, but at least one scientist sees it as a reality—that is, if a computer program can translate alien chatter into something we can understand. Researchers know how to tell whether an interstellar message picked up from space was coming from a language, image or music, and now John Elliott of Leeds Metropolitan University is taking the interpretation a bit further: He says he has the tools to start deciphering alien languages into words and sentences. Elliott, the academic leader for Artificial Intelligence in the School of Computing, is hoping to use the power of the computer to decode unknown languages (from Earth or beyond) so he can “aid the search for extra-terrestrial intelligence.” Elliot developed a computer program that analyzes 60 languages around the world, pulled from raw text samples available on the web. He hopes that finding a trend in human expression will help us understand language structure better. There’s a distinct pattern in the way people talk, determined by how much information our minds can understand at a time. Elliot hopes that amassing human phrases will give us clues to figuring out how an alien language might be patterned. That is of course, assuming they use grammar at all. Or if they even exist. While Elliot thinks alien tongues would be very different than English and other human languages, at least his program might give us a chance of breaking up any extra-terrestrial messages into nouns and verbs. Related Content: Discoblog: Astrobiology Rap Song DISCOVER: 20 Things You Didn’t Know About…Aliens Bad Astronomy: Are We Aliens? Reality Base: Forget Al-Qaeda; Apparently It’s the Aliens We Need to Worry About DISCOVER: SETI..... Listen For Yourself DISCOVER: Aliens Among US