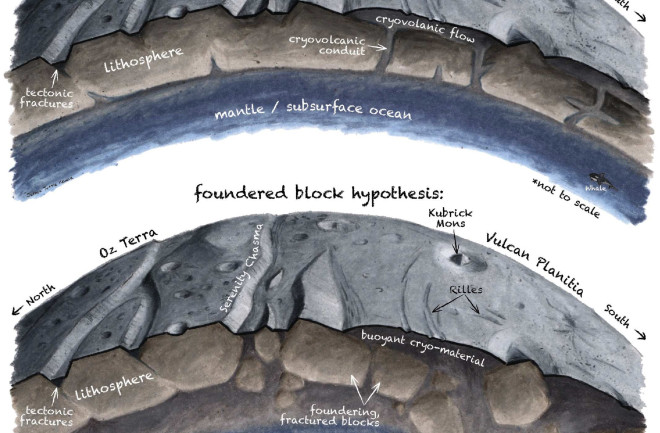 Scientist and styudy author illustrated the two most likely ways that Vulcan Planitia could have been flooded by icy slush.(Credit: James Tuttle Keane, from Beyer et al. 2019) While New Horizons is exploring new targets, researchers are still working on the mountains of data it returned in 2015 from its visit to Pluto and its moon Charon. Charon is Pluto's largest companion, and like Pluto, it has a complicated, icy surface dotted with mountains and canyons. Large parts of Charon's surface appear to have been resurfaced in the past, leading to theories of an underground ocean that could have erupted long ago. New Horizons’ best views of Charon were of its side that faces Pluto. (Charon, like our own moon, always keeps the same side facing its planet.) On that side, Charon has a clearly visible divide running vaguely along its equator, marked by large ridges and canyons. Researchers call the moon's lumpy northern region Oz Terra, while the smoother southern region is known as Vulcan Planitia. Both north and south are covered in impact craters, implying meteoroids have been battering a frozen, largely static world for a long time. It's what's under and older than those craters that interest researchers. Astronomers think slush from a subsurface ocean flooded the area when the world was younger, leaving the smooth ice plains that New Horizons spotted in 2015.

Vulcan Planitia shows signs of ancient flooding, like its mountains that appear to rise out of empty moats. Such features are often signs of a slow flooding of viscous material – whether lava flows on Earth, or icy slush on the moons of the outer solar system. Astronomers led by Ross Beyer, an astronomer at NASA Ames and the SETI Institute, wanted to find out how that kind of flooding might happen on Charon. Their research was published online in the journal Icarus on January 21. One option is that a warm period in Charon’s history melted large portions of its surface, which later refroze around its mountains. “That requires a lot of heating late in Charon’s evolution,” Beyer explains. And while not totally impossible, Beyer said this is the least likely possibility.

Pluto's moon Charon has a clear divide between its northern and southern hemispheres, marked by a line of ridges. (Credit: NASA/Johns Hopkins University Applied Physics Laboratory/Southwest Research Institute) Moon-wide, Charon was more liquid in its very early years. As it aged and cooled, its surface would have frozen first, leaving an underground ocean. So the more plausible explanation is that the underground ocean escaped overground, allowing an icy slush to flood out over Vulcan Planitia. This could have occurred through cryovolcanism, the ice version of normal volcanoes. But these weren’t violent, Krakatoa-style eruptions. Instead, they would have been a slow creep of material through cracks in Charon’s surface. A slightly more dramatic version of this slow flood depends not on small cracks, but on large-scale rupturing of Charon’s upper layers. In this scenario, the surface doesn’t just crack, but founders into huge chunks which sink or tilt into the slushy ocean. This would have probably caused a faster flooding, but the end result looks identical as far as New Horizons’ images can show. Beyer says it will be up to modelers to determine which scenario – the small cracks or large broken pieces – is more likely.