Changing the Size of the Giant ~186 A.D. Eruption of Taupo 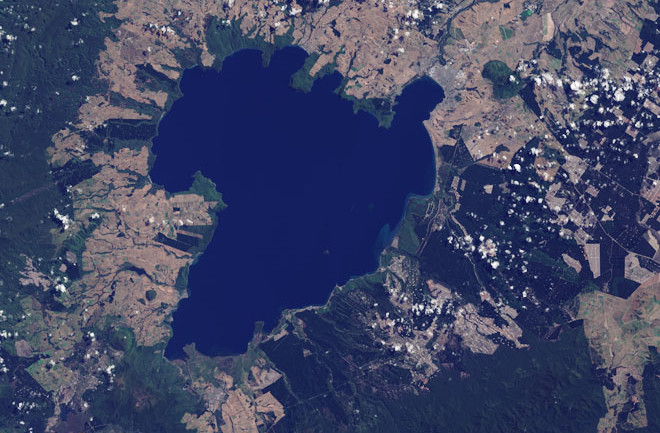 Landsat 8 image of Lake Taupo, the source of the ~186 A.D. cataclysm eruption studied in Houghton and others (2014). Image: USGS/NASA, taken March 14, 2014. Whether it is volcanologists or the public, giant volcanic eruptions are captivating events. These massive events can have a global impact and the idea of a massive ash plume towering 30 kilometers or more over the landscape is an awe-inspiring notion. So, it shouldn't be surprising that whenever a large volcanic deposit is examine, people want to know just how big it was, and usually, the bigger, the more exciting. However, sometimes that quest for largest can hide the true nature of the eruption. By careful examination of the deposits left by the ancient giants, we can get a better grasp on just how big is big ... and sometimes that means making that giant eruption a little big smaller. The ~186 A.D. eruption of Taupo in New Zealand has been considered one of the largest eruptions during the last 10,000 years. It produced over 50 cubic kilometers of volcanic ash and debris (tephra) and pyroclastic flows that destroyed over 20,000 square kilometers of the North Island of New Zealand. Studies that examined the thickness of ash deposits from the eruption estimated that this eruption created an ash plume that reached over 50 kilometers -- that would be the tallest ash plume of the Holocene, by far. It earned the term "ultraplinian" because it was that much larger than a Plinian eruption, which is the gold standard of explosive eruptions. Plinian eruptions, whose name come from Pliny the Younger who observed such an event during the 79 A.D. eruption of Vesuvius, produce ash plumes that tower 30+ kilometers over the volcano. However, this eruption at Taupo, based on the ash deposits, looked to be 15 kilometers taller than almost any other explosive eruption that we could accurately know the ash plume height. A study that was just published in Geology by Bruce Houghton and others examines the 186 A.D. Taupo eruption to try to assess just how big the eruption really might have been. This involves carefully examining the distribution of ash around the volcano, both in terms of the thickness of the ash and largest size chunks of volcanic debris in these deposits. This method does a great job at estimating plume heights, but it assumes that the eruption rates are constant and that the winds during the duration of eruption remained steady. When you look at an ash deposit as a whole, subtle variations such as changes in wind speed and direction get lost -- remember, you're looking at the whole deposit at once. These deposits might look homogenous at this scale, but when you start to dissemble them on a centimeter-by-centimeter scale, the variations jump out. Houghton and others took apart one of the main lobes of the 186 A.D. eruption, what is known as the Unit 5 deposits (~5.8 cubic kilometers [DRE*] of volcanic ash and debris). They were able to subdivide this single unit, which had been used to help define the original height of the Taupo ash plume, into 26 subunits that show the subtle changes across the hours-to-days duration of the eruption. It turns out that even within the single Unit 5 deposit, the distribution of the largest clasts in the deposit changes, so that they could have been deposited at the same time. This means that looking at Unit 5 as a singular explosive eruption is problematic. Instead, the 26 subunits likely represent pulses of the eruption and reflect some dramatic changes in wind direction during the eruption.

The axes of ash dispersal for the 26 subunits within the Unit 5 deposit of the ~186 A.D. eruption of Taupo in New Zealand. The change in the axes reflect the changing wind conditions. Image: Houghton and others (2014). Why is this important? Well, if Unit 5 isn't a single explosive event, then we can't use the overall distribution of ash thickness and size to determine the height of the ash plume. Instead, you need to examine the subunits to determine how tall the plume might have been, taking into account changing winds (see above; as inferred by the distribution of the deposits). In doing so, it turns out that the Taupo plume was closer to 31-37 kilometers tall during the strongest parts of the eruption and 25-26 kilometers during some of the less vigorous times. This pulls the Taupo eruption out of the realm of "ultraplinian" and back into Plinian eruption. For comparison, the plume height during the 1991 eruption of Pinatubo in the Philippines was ~40 km, so Taupo's 186 A.D. might have been on a similar scale, although it did eruption more volcanic material. This change in estimated plume height can have a strong effect on how the ash and volcanic aerosols might have been distributed around the globe. This eruption of Taupo doesn't seem to have a strong impact of the world's climate, which is perplexing if it was such a massive, 50-km tall ash plume. Now, a 31-37 kilometer plume still isn't small -- that is giant eruption in its own right. However, Taupo's location in the mid-latitudes of the southern hemisphere mean that a more typical Plinian eruption might be expected to have less of an impact of global climate than a similarly-sized eruption in/near the tropics like Pinatubo. This study by Houghton and others shows the importance of going back and re-evaluating volcanic deposits in fine detail to better understand how these eruptions unfolded, especially when we have no historical record of the event. The broad mapping of many volcanic deposits can give us the first estimates of the size of these large eruptions, but without careful examination of the layers of volcanic ash, we might miss the subtle controls on how these deposits are distributed. As Houghton and others also bring up, it also calls into question the necessity of the term "ultraplinian" in the modern volcanic record -- Taupo was the type locality of such enormous ash plumes, but now Taupo can't even claim that distinction. *DRE: This stands for "dense rock equivalent", which means calculating the volume of magma erupted after subtracting the open space (bubbles) in the ash and pumice. DRE is always smaller than the equivalent amount of volcanic ash and debris. Reference Houghton, B.F., Carey, R.J., and Rosenberg, M.D., 2014, The 1800a Taupo eruption: “III wind” blows the ultraplinian type event down to Plinian: Geology, v. 42, no. 5, p. 459–461, doi: 10.1130/G35400.1.