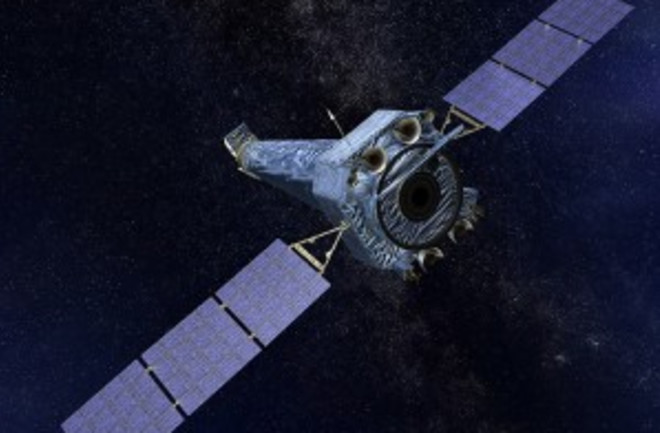 NASA's Chandra X-ray Observatory went into Safe Mode on October 10. An investigation is underway to find the reason why. (Credit: NASA/CXC) NASA’s Chandra X-ray Observatory will soon be observing the cosmos once again, the space agency said Monday. A scare last week left the spacecraft in safe mode. Chandra is a space observatory that observes extreme objects that emit X-rays, like black holes. The problems with Chandra surfaced on October 10, just days after the iconic Hubble Space Telescope also went into safe mode due to issues with its gyroscopes, which help point the spacecraft. Together, the pair make up half of NASA's "Great Observatories" program.

Update! Chandra operations resume after cause of safe mode identified: our Operations team has successfully returned the spacecraft to its normal pointing mode. After software reconfiguration, we will return to science operations soon. https://t.co/68Q1plKHOPpic.twitter.com/Inld39cSTV

While in Safe Mode, Chandra’s instruments move into a safe configuration, where important hardware is protected, the spacecraft orients so that its solar panels get the optimal amount of sunlight, and the craft’s mirrors point away from the sun. According to an official NASA statement, Chandra transitioned into safe mode in a manner consistent with “normal” or expected behavior. The space agency hasn’t announced why Chandra entered Safe Mode, but all systems aboard the craft functioned successfully in the transition and all of Chandra’s instruments are safe and unharmed. NASA said last week it was still investigating the reason for this sudden shift. “Chandra is 19 years old, which is well beyond the original design lifetime of 5 years,” NASA said in the statement. “In 2001, NASA extended its lifetime to 10 years. It is now well into its extended mission.” The space agency adds that Chandra “is expected to continue carrying out forefront science for many years to come.”

Chandra is 19 years old, which is well beyond the original design lifetime of 5 years. In 2001, NASA extended its lifetime to 10 years. It is now into its extended mission & is expected to continue carrying out forefront science for many years to come. https://t.co/nMx5ioKbtr

While this investigation pushes forward, “NASA continues to work toward resuming science operations of the Hubble Space Telescope after the spacecraft entered safe mode due to a failed gyroscope (gyro) on Friday, Oct. 5,” an official NASA statement said. Earlier this month, the Hubble Space Telescope went from four working gyroscopes to only two fully-functional gyros. While the telescope can function with two, or even one, gyro — the gyroscopes keep the telescope pointed in the same direction for long periods of time — Hubble functions best with at least three gyros. Following this gyro failure, the Hubble operations team turned on a backup gyro. Unfortunately, the backup gyro didn’t operate successfully. Since then, the team has been testing the backup gyro, which continues to report false, too-high rotation rates. This backup gyro is also unable to report Hubble’s small movements. An anomaly review board was formed to find the cause of these issues and try to fix them. The planet-hunting Kepler space telescope, low on fuel and nearing the end of its mission, started the month in safe mode. Astronomers have since started the spacecraft back up and are working to download its latest data before it runs out of power.