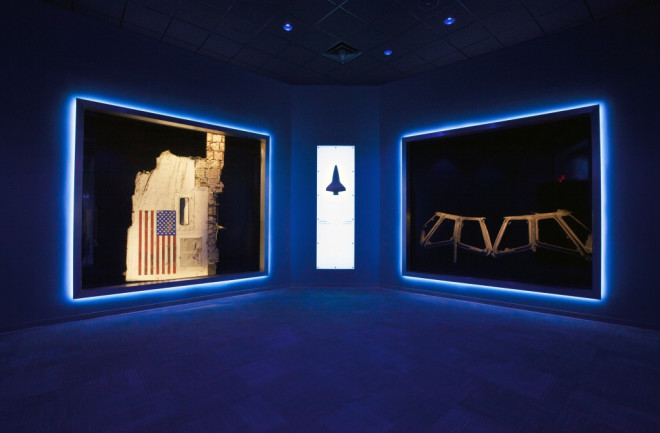 Wreckage from the Columbia and Challenger shuttle disasters is on public display for the first time. (Credit: NASA/Kim Shiflett) For the first time, the public can view wreckage from the Challenger and Columbia space shuttle tragedies, which have been kept hidden from view for decades. NASA in June opened the “Forever Remembered” exhibit at the Kennedy Space Center in Florida. The exhibit contains never-before-seen pieces of wreckage from both shuttles, as well as personal artifacts that tell the story of the combined 14 astronauts who lost their lives. The exhibit serves as a poignant reminder that space travel is still a dangerous proposition, and that we owe much to the explorers who have taken it on.

Artifacts from Ronald McNair, who served as a mission specialist on the Challenger space shuttle mission. (Credit: NASA/Kim Shiflett) In 1986, Challenger lifted off for its 10^th mission, but one minute and 13 seconds into after the launch, a booster failure caused an explosion that destroyed the vehicle. Seventeen years later, the Columbia shuttle broke apart in the skies over Texas as it re-entered Earth’s atmosphere following a 16-day science mission. Each astronaut is immortalized in the permanent exhibit at the space center. Their displays contain personal items that tell their story, revealing their passions, talents and achievements. It’s the largest collection of personal items from crewmembers in the U.S., which places the exhibit’s focus on the people, not the tragedies. In fact, there isn’t a single picture of either shuttle disaster on display.

Seen for the First Time

Remnants from the Columbia mission were stored and studied at Kennedy's Vehicle Assembly Building, and were briefly displayed to the public during a traveling exhibit in 2008. After the Challenger accident, which played out on live television, every piece of the wreckage was collected and stored in former missile silos buried 90 feet below ground. There they remained for decades, until now. In a smaller room separated from the 14 crewmember memorials, the public can view relics from both disasters for the first time. A 12-foot scarred section of Challenger’s body stands vertically in the room, the U.S. flag prominent on it. Next to it, the scorched window frames from Columbia’s cockpit are mounted at eye level. NASA officials made every effort to make the exhibit personal and poignant, while stripping any hint of sensationalism from its presentation. NASA’s space shuttle program operated for three decades starting in 1981 and ending with a successful Atlantis shuttle mission in 2011. Although the shuttle program has been shuttered, “Forever Remembered” will serve as a permanent reminder of what it took to reach for the stars and get space exploration to the point it’s at today.