Ceres Gets Weirder With More Bright Spots and Unexplained 'Pyramid' 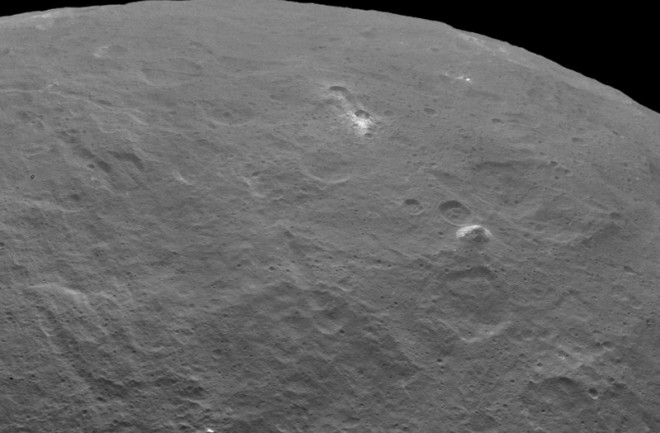 (Credit: NASA/JPL-Caltech/UCLA/MPS/DLR/IDA) If you thought Ceres’ spots were weird, wait until you see its mystifying 'pyramid.' Indeed, Ceres has intrigued NASA scientists and worked fringe UFO bloggers into a frenzy since the Dawn spacecraft arrived for a close-up of the dwarf planet in March. Upon arrival, Dawn imaged a cluster of bright spots in a crater; now, a pyramid towering over a flat landscape serves as the latest addition to Ceres’ scrapbook of oddities. Scientists have plenty of questions about Ceres’ features, but will we get answers? Maybe.

Right now, Dawn is in its second orbiting phase roughly 2,700 miles above Ceres, which has given us a closer look at the now famous bright spots. We now know there are even more spots than we initially saw in early images.

A closer look at those mysterious bright spots. (Credit: NASA/JPL-Caltech/UCLA/MPS/DLR/IDA) Scientists believe a highly reflective substance — ice or salt are leading contenders — is responsible for the spots, but they are still considering other options (a thriving alien metropolis is probably not one of them). Thankfully, Dawn is equipped with an infrared mapping spectrometer that can identify minerals based on the way they reflect light. As scientists get more images and data from Dawn, they’ll certainly learn more about the composition of those spots.

Dawn also photographed a pyramid-shaped landform in its latest crop of photographs. Based on visual evidence, the mountain rises roughly 3 miles into the sky, and it’s smack-dab in the middle of a relatively flat area on Ceres’ surface. This shouldn’t come as too big of a surprise: Ceres bears all the telltale signs ancient, and perhaps present, geologic activity. Ceres has scars on its surface that hint at ancient lava flows, landslides and collapsed structures. Ceres’ story is only going to get more interesting. Dawn will continue to orbit 2,700 miles above the dwarf planet’s surface until June 30. Then, it will edge even closer, entering orbit at an altitude of 900 miles sometime in August. When that time comes, it’s safe to say another strange chapter will be added to the book of Ceres.