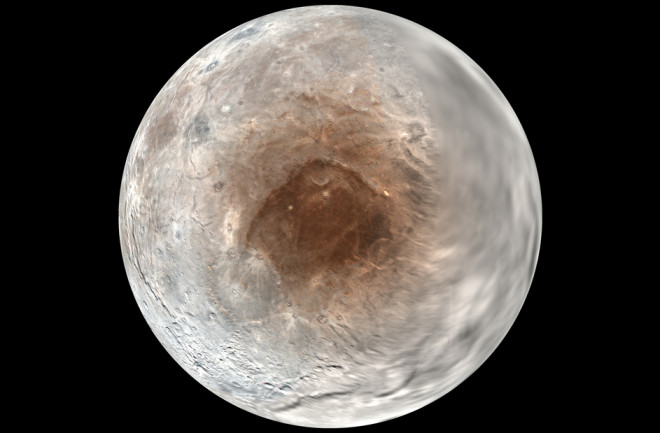 Charon's great red spot, courtesy of New Horizons. (Credit: Credit: NASA/Johns Hopkins University Applied Physics Laboratory/Southwest Research Institute) When NASA’s New Horizons spacecraft sent back the first high-resolution images of Pluto and its moon Charon, scientists quickly realized the outer solar system was more active than they’d previously thought. The first images of Charon revealed a crimson north pole, covered in tholins — chemically complex, tar-like hydrocarbons that are produced when nitrogen and methane ices are exposed to radiation from the sun. Scientists nicknamed the dark area “Mordor” — the seat of evil in “Lord of the Rings”. But where did Charon’s tholin-producing materials come from? Scientists had theorized that gases leaking from Pluto’s atmosphere were getting trapped on Charon and converted to tholins when its pole faced the sun, but this hypothesis was never modeled quantitatively. Now, a new paper, published Wednesday in the journal Nature, appears to confirm what scientists had guessed: Charon is stealing gases from Pluto. You could say scientists at the SouthWest Research Institute (SWRI) and NASA Ames Research Center caught Charon red-handed.

Just as water evaporates into Earth’s atmosphere, creating clouds and weather, the ices on Pluto’s surface are evaporating into its thin atmosphere. Pluto and Charon orbit close to each other, so gases in Pluto’s atmosphere get pulled by Charon’s gravity and trapped in its polar cap. Gases like nitrogen and methane are attracted to cold, making Charon’s frigid pole an ideal spot for these chemicals to accumulate. “The idea is that Pluto is constantly evaporating ice from its atmosphere and leaking out into space,” says Dale Cruikshank, study co-author and astronomer at NASA’s Ames Research Center. “So gases come by and get trapped and if that gas includes methane and nitrogen then it can sit there on Charon and get irradiated and turn into these colorful tholins.” The extreme axial tilt of Pluto and Charon is largely driving this process. Earth’s axis is tilted 23.5 degrees, accounting for the four seasons. Pluto and Charon, on the other hand, are tilted roughly 119.5 degrees. And because it takes 248 years to travel around the sun, the winters and summers at Pluto are extreme, and last a century. When the planetary system enters summer, Charon’s poles are blasted by radiation from the sun, causing the trapped methane and nitrogen to sublimate and leave behind a red film.

Tholins aren’t uncommon in our solar system. Saturn’s moon Titan has tholins in its atmosphere. Pluto is also covered in tholins, and scientists expect similar features to be present on other outer solar system objects like Neptune’s moon Triton, and the dwarf planet Eris. This strange red material is relatively new to science. In 1970, scientists Carl Sagan and Bishun Kare coined the term after publishing a paper about this weird substance they’d created in their Cornell laboratory. They took gases that were known to exist in our galaxy and irradiated them with ultraviolet light, which yielded a brown sticky residue. Because tholins have such complex chemistry, and are comprised of the most abundant gases in the cosmos, there’s a chance they could be an early indicator of life. “When tholins are mixed with water, or hydrolyzed, they can create amino acids,” explains Cruikshank. Amino acids are some of the building blocks of life, or at least life as we know it. New Horizons has given scientists a chance to glimpse into a planetary system almost 5 billion miles away, and it’s delivered interesting material so far. “What we see is a level of dynamic activity that we never expected — Pluto is small, it’s so far away most people figured that it was frozen over and dead with nothing happening within the last 4 billion years,” says Cruikshank. “But we get there and see that it has active geology, active chemistry and an atmosphere … here we thought it would be boring and dead but it’s exactly the opposite.”