Catching Cosmic Rays by the Tail

The Super-TIGER experiment earns its stripes 25 miles above the South Pole, collecting samples of distant stars – and possibly evidence of a black hole much closer to home. 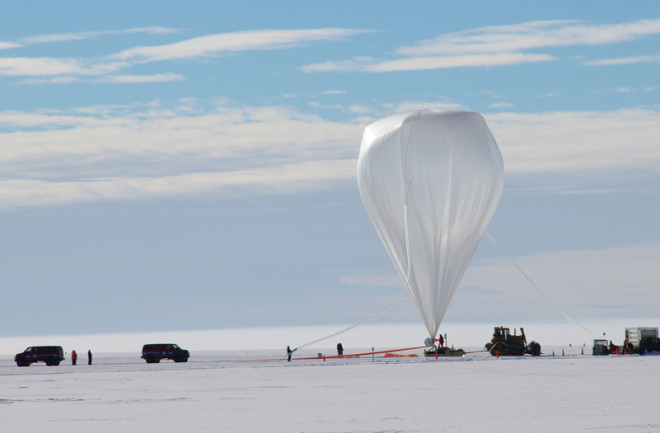 Borne aloft by a helium balloon, the Super-TIGER probe flew over Antarctica for 55 days, searching for fragments of stars. | Ryan Murphy/Washington University

That’s about 1,000 miles east from McMurdo Station. But the sun has set on Super-TIGER, and it will not rise again until September. Temperatures are headed down to minus 70 degrees Fahrenheit. No sane search party would head out in the polar darkness, so for now there is nothing to do but wait.

That idleness contrasts starkly with the flurry of activity that came just before. For nearly two months, Super-TIGER took a wild ride 24 miles above the South Pole, hanging beneath a giant long-duration balloon.

From that perch, high above the bulk of Earth’s atmosphere, the box-shaped instrument was pelted by heavy atomic nuclei from deep space, leaving bread-crumb trails of light in its three sets of detectors. (TIGER stands for Trans-Iron Galactic Element Recorder.) Each event provided a little extra bit of clarity to our sketchy understanding of the unstable, ultramassive stars that help shape the destiny of our entire galaxy.

After 55 days, officials with NASA’s Columbia Scientific Balloon Facility declared Super-TIGER’s flight over, to ensure a safe recovery of the instrument. They shredded the balloon by remote control and sent its payload parachuting down to temporary oblivion. But while it sits in deep freeze, the hard work for the scientists is just beginning.

Before it went down, the instrument radioed in most of its observations. Binns, the Washington University astrophysicist who leads the project, is now huddling with his team to make sense of the flood of information. He expects the effort will take two full years — and even that won’t be enough to provide the kind of detailed cosmic answers he seeks.

Sometime late this year, a rescue team will set out to bring Super-TIGER back home, where Binns and company will begin refurbishing it, with a goal of starting all over again in 2015. “There are some parts of it that can survive, and there are some parts of it that we’re pretty sure can’t,” Binns says. “But we’ll need another flight, and we plan to do another flight.”

Bits of the Universe

There are many ways to study the universe, and Binns has chosen one of the most difficult. Even the name of what he studies is confounding. Although the energetic particles that Super-TIGER tallied are known as cosmic rays, they are not rays at all, but rather atomic nuclei that travel at extreme velocities. The term is a historical error committed in the 1920s by the influential physicist Robert Millikan, better known as the man who measured the charge of the electron.

The first challenge with cosmic rays is that unlike true rays, such as visible light or X-rays, they do not travel in a straight line. They get tangled up in the magnetic fields that weave through interstellar space and get turned around willy-nilly. If you could look at the sky with cosmic-ray eyes, you would just see “such a big blur that you couldn’t possibly untangle it,” Binns explains. The second challenge is that heavy cosmic rays are rare. During its 55-day flight, Super-TIGER collected just a few thousand of the heavy atoms that Binns seeks, with the help Super-TIGER's collaborators at the Goddard Space Flight Center, Caltech, the Jet Propulsion Laboratory, and the University ofMinnesota.

Those twin scientific obstacles contribute to a big pragmatic one: Cosmic rays are considered an exotic sideline even within the world of astrophysics. “In the original proposal, Super-TIGER was going to be the precursor to a satellite, but basically there’s no money for that,” says Ryan Murphy, the sole graduate student working on the project.

Murphy’s colorful blog, “Super-TIGER on the Ice,” documented the alternating moments of astonishing natural beauty (sparkling glaciers at 2 a.m., surprise penguin visits) and technical tedium (such as making sure the detector’s connections still work in the thin stratospheric air).

What cosmic rays offer in return for all those headaches is the extraordinary experience of sampling pieces of a star. “We believe that galactic cosmic rays come from groups of massive young stars called OB associations,” Binns says.

These stars blaze brilliantly and evolve a thousand times as rapidly as our sun. As they grow unstable, in as little as 6 million years, they expel much of their outer layers. Then, in a final frenzy, the stars go supernova, “and we believe that the primary accelerator of the cosmic rays is the shock wave from these supernovae.” One star pops off, then another and another, until all the massive stars in the cluster have exploded and stirred up a hornet’s nest of cosmic rays.

Those cosmic rays then spend 10 million years, give or take, speeding through interstellar space until some of them reach our planet. A handful of those, in turn, happened to reach Super-TIGER. The incoming cosmic rays are the very same atoms that blew out of those distant stars — not just light from the stars, not a byproduct of the stars, but bits of the stars themselves.

“We’re detecting particles that started out hundreds of light-years away that have traveled for millions of years, and after all that time they’re coming to an end here in our detector,” Murphy marvels. That direct connection makes cosmic rays incredibly powerful tools for testing our ideas about how stars form, evolve and die.

Most of the cosmic rays that reach Earth are hydrogen nuclei, but those are so common that, by themselves, they do not carry much distinctive information. Binns discards them and focuses instead on rare but much more communicative heavy atoms, ranging in mass from zinc to molybdenum — the “trans-iron” elements that make up the TI in TIGER — which are produced in the nuclear furnaces of extremely massive stars.

We all have a deep investment in that stellar process. Earlier generations of such stars produced the heavy elements that make up Earth; that’s also where the iron in your blood and the calcium in your bones came from. But Binns has a unique interest in those heavy elements because they act like an identity stamp, telling him which cosmic rays came from the OB stars and which came from surrounding material that just got caught up in the flow.

The whole theory of how OB stars evolve, explode and give rise to cosmic rays is based on ideas that still have question marks in them. Binns peppers his language with “we believe.” The goal of Super-TIGER is to put periods on those sentences.

On Dec. 9, 2012 (Dec. 8 in Antarctica), Super-TIGER began a daylong ascent on a helium balloon 200 times the volume of the Goodyear blimp. The launch was carefully timed. For just a couple of months around the middle of Antarctic summer, an air current tidily circles the South Pole, ensuring that any experiment bobbing along in that vortex will tend to stay above the continent.

Super-TIGER managed nearly three laps around the pole before the winds gave out, setting a long-duration record for a heavy-lift balloon and collecting more cosmic rays than the scientists had dared hope. There was only one serious mishap: A freak failure of all four solid-state memory drives aboard the experiment (“very surprising to me,” Binns says drily) scuttled some of their results.

Even so, the team recovered at least four-fifths of their high-priority data. Some of the rest may turn up when the drives are physically recovered and returned to the lab.

Based in part on findings from TIGER, Super-TIGER’s smaller predecessor, astrophysicists have begun filling in the story of the clusters of the young, massive OB stars. Early on, when the cluster begins to condense from a collapsing cloud of gas, the brightest and shortest-lived stars blow out fierce winds that energize the first set of cosmic rays and expel material from the star itself.

The supernova explosions that follow further whip up those shock waves, and then violently accelerate the material from previous supernovas as well. Measurements from TIGER seem to show that about 20 percent of cosmic rays consist of heavy elements expelled by the stars themselves. The rest appears to be material that had been sitting quietly between the stars before getting caught up in the crossfire.

The results from Super-TIGER will add many details. They will also make it possible to investigate an especially exotic possibility. Some of the cosmic rays it detected might have come not from manic stars but from a black hole, lurking right here within our galaxy, that sucks in nearby material and whips it nearly to the speed of light.

If such a monster, known as a microquasar, does exist, Super-TIGER’s detectors should see an anomalous signal, too powerful even for a supernova. “There would be a funny bump in the energy spectrum,” Murphy says. “If we could find a microquasar nearby, wow, that would be pretty cool.”

Traces of that black hole might already be stored away on Binns’ computer, or locked in a crippled data drive sitting atop an Antarctic glacier. Or the evidence may yet be streaking Earthward at thousands of miles per second, unknown until the next time Super-TIGER rises high in the sky, gazing out into the depths of space.