Catch Me if You Can

After spending decades and billions of dollars searching for the Higgs boson particle, physicists will soon find out if it was all just wishful thinking 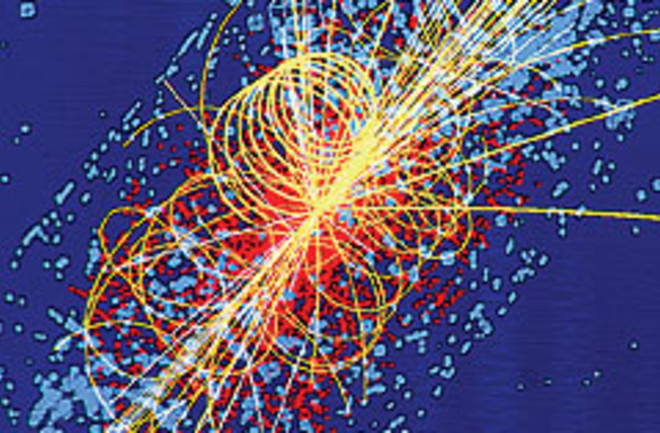 Will a Higgs boson—the most wanted particle in physics—emerge from the wreckage of two colliding protons as seen in this simulation of an experiment planned for Europe’s Large Hadron Collider in 2007? The pattern of particle tracks (yellow) and energy (light blue) will identify the unique signature of a decaying Higgs | Courtesy of CERN

The most powerful particle accelerator in the world is the Tevatron, a ring-shaped, stainless-steel corridor four miles long that can smash together atomic fragments moving at more than 99.99 percent the speed of light. This grand device is the centerpiece of Fermi National Accelerator Laboratory, 45 miles west of Chicago, where scientists work around the clock to track the collisions. All of that requires a leap of faith: The Tevatron is mostly invisible, buried a couple dozen feet beneath windswept prairie.

I drove to Fermilab on a blustery winter day to learn about a subatomic phantom called the Higgs boson. The Higgs also requires a leap of faith, because so far it is entirely hypothetical. Some physicists are counting on it to help solve the most intractable riddles in their profession. It might, for instance, explain the preponderance of matter over antimatter in the cosmos. Or it might yield a formula that would unite gravity with the three other fundamental forces into a long-sought theory of everything. Above all, the Higgs could be the emissary of a ubiquitous force field that confers mass on matter. It could answer a huge question: Why does matter weigh something instead of nothing?

For all these reasons, physicists at Fermilab and other facilities around the globe are trying to prove that the Higgs boson exists. But in the 75 years since accelerator collisions began exposing the innards of atoms, the Higgs has stubbornly eluded detection. It is a fugitive within a theory called the standard model, which describes all the fundamental particles in the universe. The model posits the existence of dozens of these particles: fermions, which make up matter, and bosons, which carry force. All but the Higgs have been found.

I was drawn to the Higgs boson precisely because it might not exist. As a science writer I deal in fact, but in my off hours, I grapple with mystery, and the Higgs is a potent one. Without it, experts cannot say that the standard model corresponds with physical truth. It is a figment so alluring that world governments have poured billions of dollars and trillions of volts of electricity into machines designed to wrest the Higgs into observable reality. Until it is found, the Higgs stands as a totem of all that is unknown and desperately desired. “The Higgs boson is really a rubric,” Fermilab theorist Chris Hill says. “We don’t know what we’re talking about.”

In 2000 the LEP collider knocked electrons into positrons and recorded this cryptic result. Green and yellow lines represent jets of subatomic particles that may have been created by the rapid decay of a Higgs boson. | Courtesy of CERN

The Higgs was born of wishful thinking. It was introduced in the 1960s by British theoretical physicist Peter Higgs of the University of Edinburgh to help plug a huge gap in the understanding of quantum physics. The simplest and most elegant models require that all elementary particles should have the same mass: zero. But every moment of human experience asserts otherwise, and experiments show that the masses of elementary particles in fact differ by many orders of magnitude. Physicist Steven Weinberg of the University of Texas at Austin and Pakistani theorist Abdus Salam used the Higgs concept to bring theory in line with reality.

In Weinberg’s synthesis the Higgs field is like a sea of molasses that fills all of space. It resists the movement of particles to varying degrees. The more a particle interacts with the Higgs field, the greater the resistance and the heavier the particle. The symmetry of the standard model is thus restored because mass is no longer seen as an intrinsic property of matter. All elementary particles weigh nothing until they interact with the Higgs field. Variations in Higgs field interactions are the only explanation physicists have for the fact that the heftiest known particle weighs 200,000 times as much as the lightest one, while photons weigh nothing at all.

“The Higgs field, the standard model, and our picture of how God made the universe depend on finding the Higgs boson,” wrote Nobel laureate Leon Lederman in his 1993 book The God Particle. His book championed the Superconducting Supercollider, the $10 billion accelerator he had designed to nab the Higgs. Because it is thought to be the most massive of all elementary particles, the Higgs boson would show up only in ultrahigh-energy collisions. The Supercollider’s particle beams would have collided at 20 times the energy of the Tevatron’s. But soon after The God Particle was published, Congress pulled the plug on the project.

That was the first of several heartbreaks for Higgs seekers. The next came at the Large Electron Positron, or LEP, collider, a 17-mile-long particle smasher on the Franco-Swiss border at the European Center for Nuclear Research, called CERN for short. In August 2000, after a decade of collisions at gradually escalating energies, the collider team saw data that hinted at the presence of the Higgs. “We were sure we were going to find the Higgs particle,” says experimental physicist Christopher Tully of Princeton University, who heads the CERN search. “It was a very dramatic moment.”

Unfortunately, the LEP collider was shut down for good in November 2000 to make way for the $2.5 billion Large Hadron Collider, scheduled to come online in 2007. The LHC will be supported by 5,000 physicists and 500 research institutes around the world. It will hurl particles with seven times the energy of the Tevatron. “The LHC discovery of the Higgs is guaranteed—if it exists,” says experimental physicist Suyong Choi of Fermilab.

That qualifier typifies a phenomenon I call Higgs hedging. Experts can make any number of claims for the Higgs as long as its existence remains in question. They disagree on whether it is an indivisible entity or a composite of more familiar particles. They argue about whether there is just one kind of Higgs or five. Harvard University physicist Sheldon Glashow has called the Higgs boson a commode down which all theoretical inconsistencies are flushed.

The final say will come from experimentalists like the ones at Fermilab. The accelerator teams work amid a surreal farrago of abstract architecture and ecological awareness. A spidery sculpture called Broken Symmetry straddles the main entrance, power pylons shaped like the Greek letter pi march to the east, and a thousand acres of the surrounding campus is restored tallgrass prairie. Underground, two enormous detectors, each weighing 5,000 tons, monitor subatomic particle smashups, looking for anything extraordinary.

Standing by one detector, called DZero, Gerald Blazey, project spokesman and a physicist at Northern Illinois University, described the complicated shower of secondary particles emitted from every collision. A diagram of these so-called decay channels looks like a flowchart of ancient runes. “If the Higgs exists, we’re already making it,” Blazey noted. But the equipment at the Tevatron is not sensitive enough given the current data to distinguish the fallout of a Higgs shower from those of other heavy particles such as the top quark, which was found here in 1995.

“You probably have to produce about a billion Higgs particles to reliably identify one,” MIT theorist Frank Wilczek warned me. Even the Large Hadron Collider will struggle with this problem, he said. “It’s like listening to AM radio. There’s so much interference.”

After a morning of talking to particle physicists, my mind was also beginning to sound like AM radio. Before lunch I went to the restroom to wash up. In the stall I heard a heavy ping on the tile floor. I knew at once what had happened. My talisman had fallen off its cord.

My talisman was a round slug of pewter inscribed with esoteric symbols not unlike the physics notations on the diagram at DZero. I had bought it years before when I was in the thick of heartache from the death of a friend. The shopkeeper explained that the talisman was meant for protection from destructive urges and energies and that I should wear it on a cord next to my skin until it or the cord broke. The talisman would not fall off, she explained, until I was safe from harm. I tied it around my waist all those years ago, and never removed it.