Catch a Scorpion by the Tail

Now that it's summer, stargazers in the northern hemisphere can catch a glimpse of both M6 and M7. 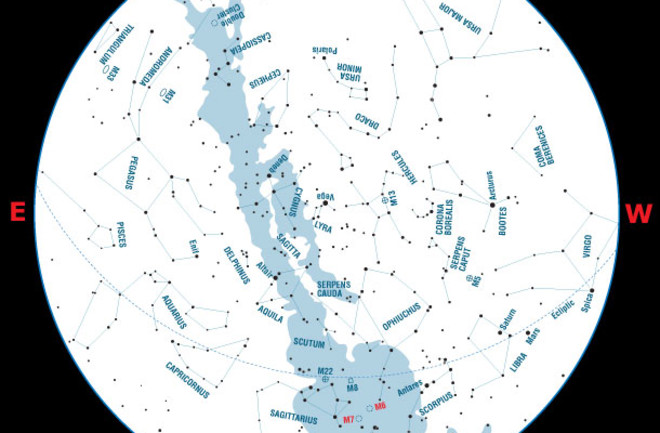 What You Can See: Venus passes close, just 0.2 degrees north of Jupiter in the predawn sky Aug. 18. The sky’s two brightest points of light haven’t appeared this close since May 2000.

Two of the sky’s finest open star clusters lurk in the southern part of Scorpius the Scorpion. Both M6 and M7 appear as fuzzy patches to the naked eye under a dark sky. Yet through binoculars, a dozen or more stars come into view whether you observe from the country or a suburban backyard. The two clusters lie far enough south, however, that only in the summer can northern observers see them well during the evening hours.

M7 is the bigger and brighter of the two, about 5 degrees (10 full-moon widths) northeast of Shaula, the bright star that marks the Scorpion’s stinger. Located a little less than 1,000 light-years from Earth, M7 resides along the inner edge of the sun’s spiral arm. The crowded star fields in the cluster’s background belong to our galaxy’s bulge, some 25,000 light-years beyond. M6 appears 4 degrees (eight full-moon widths) northwest of M7. It lies nearly twice as far from Earth as its neighbor, so it appears smaller and fainter.

As with all open star clusters, M6 and M7 won’t last forever. Gravitational forces will slowly strip stars from each, and both will likely die within a billion years. Our sun was probably born in a similar cluster that dissipated long ago.