Cassini’s Final Hours by the Numbers 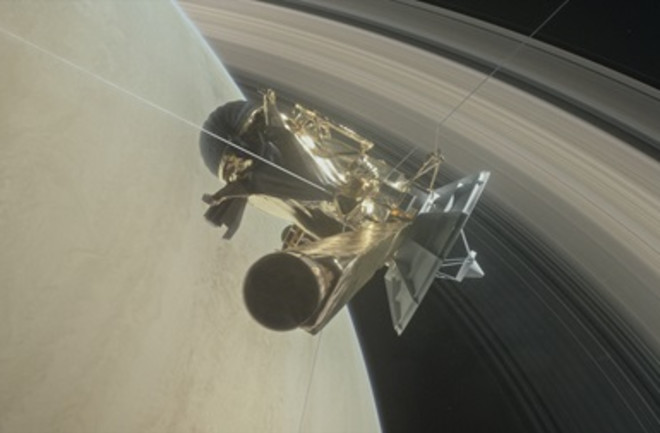 Cassini spent part of its Grand Finale diving through the gap between Saturn and its rings, taking observations that had never before been attempted. (Credit: JPL/Caltech) The Cassini probe has given us a spectacular view of the Saturn system over the 13 years it’s been there. In that time, it’s opened up untold wonders of our second-largest planet and its 62 spectacular moons. Here are a few big-to-small numbers to know as Cassini prepares for self-destruction:4.9 billion miles: the total distance traversed by Cassini in the Saturn system since 2004 635 gigabytes: the total volume of data sent back by Cassini 615 watts: the amount of power Cassini currently produces 512 kilobytes: the amount of onboard storage capacity on Cassini 294: the number of times Cassini flew by Titan and received a gravity boost, including a few skims through the upper atmosphere Plutonium 238: Cassini's power source 24: approximate number of moons visited by Cassini (out of 62) 19 years, 1 month: Cassini’s total time in space, from launch until end of mission 14 hours: the time between the last image from Cassini and its crash 13 years: the time Cassini has spent at Saturn 6: the number of moons discovered by Cassini 4:55 a.m. PDT: when Cassini will enter Saturn's atmosphere and begin to break up 2 minutes: the amount of time it will take Saturn to rip Cassini apart 1 hour, 23 minutes: the time it takes for a signal from Cassini to reach Earth due to the vast distance between us and Saturn 1 megapixel: the resolution of Cassini’s camera 1 in a million: the chance that a fuel-less, ill-controlled Cassini might have smashed into Enceladus and potentially contaminated it [This post originally appeared on Astronomy.com]