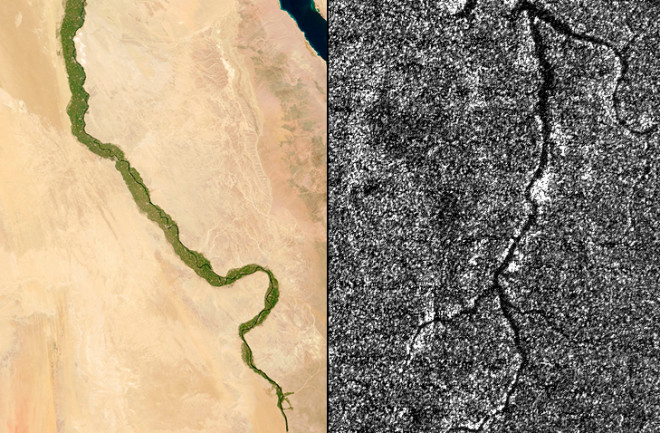 In 2004, when NASA’s Cassini spacecraft first began orbiting Saturn and studying its moon Titan, Brigham Young University planetary scientist Jani Radebaugh was puzzled. Radebaugh had expected to see evidence of liquid methane on Titan’s surface because it has a methane-rich atmosphere. But Cassini’s early findings, which focused on Titan’s equator, revealed no rivers or seas.

That changed as Cassini’s orbit shifted, allowing researchers to bounce radar off other regions of the moon. Radar signals were routinely reflected off rough, angled features such as sand dunes, cliffs and rocks, but when radar reached Titan’s polar regions, regular signals ceased. Looking at this area as a whole, the nonreflecting dark spots were reminiscent of the rivers, lakes and tributaries on Earth.

Cassini team scientist Radebaugh and an international team of colleagues announced in December 2012 that they found a river of liquid methane over 200 miles long resembling the famed Nile. The team had found several other rivers already, but the Nile clone, named Vid Flumina, stood out because of its similarity to the Egyptian namesake in terms of size, shape and role within the landscape (that is, it serves as a channel for moving liquid).

Like our own Nile, Titan’s giant river slices through slanted and rough terrain. Tributaries flow into it, and it flows out toward a massive sea. Radebaugh determined that the new Nile must be draining rainfall and subsurface liquids from the area and carrying them toward the moon’s ocean. “There appears to be liquid flowing through that river right now,” she says.

Radebaugh believes the relatively straight layout of the river is a clue to the moon’s geologic past. A straight feature like this can indicate some spreading apart of the landscape, she explains, possibly due to a process similar to one on our own world: the tectonic movement of the Earth’s plates. “Maybe there’s been active tectonism that helped shape the landscape,” she says.

Understanding if there are tectonics on the moon gives scientists “clues we can play with to make models of the inside,” says Steve Wall, Cassini Radar deputy team lead. “That’s how you understand a planet.” Understand the inside of a moon, and you’ll know how it formed, as well as how it interacts with the planet that it orbits.

Although Cassini will operate until 2017, Radebaugh is already lobbying for a return mission to Saturn’s moon. “This is such an incredible body, and we are just barely in the beginning stages of understanding it,” she says.

[This article originally appeared in print as "New Nile on Titan."]