Can You Name this Paw Print? 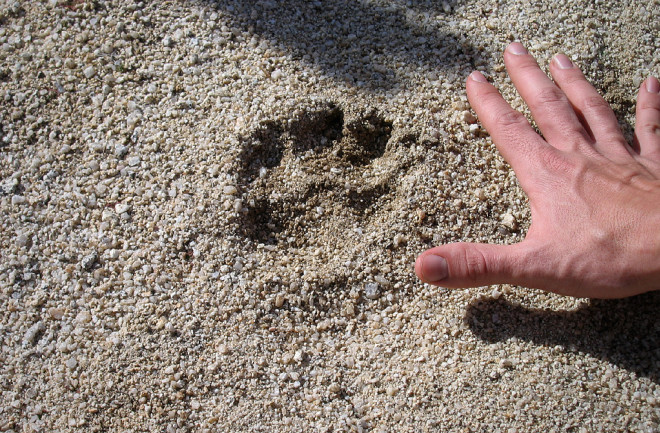 by Sharman Apt Russel Wild animals glide so easily through the landscape, into bushes and leaves, up trees, around corners, even diving into the earth, so that you often wonder: was that a fox or a wish? Did I really just see a bobcat? Is that whoofing noise a black bear, startled now and galumphing down the hill? That’s the great thing about tracks. They stay there. You can admire them for long minutes, imagining the animal who made them. There’s no mistaking, really, the roundness and size of this bobcat’s paw, the leading toe and absence of claw marks. Or this black bear. Like a barefoot human footprint, with five toes, except that the big one is on the outside. Or this raccoon. A track that resembles a human handprint but with pinpricks of claws in the dirt. The skill of identifying animal tracks may seem arcane—or at least relegated to hunters and game wardens. But citizen scientists across the country are learning the tracks and signs of wild animals for programs like Pathways: Wildlife Corridors of New Mexico, who has taken on the task of documenting the movements of six species—black bear, elk, mule deer, bobcat, pronghorn, and mountain lion—between the mountain ranges of northern New Mexico and their river valleys. Using tracking teams to monitor specific transects, as well as camera “traps” that take pictures of animals in the wild, the program provides scientific data to local, state, and federal agencies. A larger goal of Pathways is to help these agencies create wildlife corridors through which animals can move freely and safely through rural and urban communities. In this, the program is joining other citizen scientist tracking projects in the American West. In Arizona and southern New Mexico, Sky Island Alliance has been training volunteers since 2001. They now monitor 50 1.5-mile long transects within 7 priority wildlife corridor areas and have conducted over 1,000 track count surveys, with over 4,000 records for more than 40 different animal species. Their data is regularly used in county development and state transportation plans and has helped win approval for three wildlife underpasses and three overpasses across highways near Tucson. Construction of the first overpass has just begun.

Image of a mountain lion caught be a camera trap (Credit: Richard Mahler) Elsewhere, in California, the San Diego Tracking Team has a ten-year record of observations, with volunteers committing over 1500 hours per year to monitoring some 50 locations around San Diego County. In Washington, the Cascades Citizen Wildlife Monitoring Project finished their ninth winter of combining snow tracking with year-round camera traps. Meanwhile, resources like the iNaturalist project The North American Animal Tracking Database are being expanded and improved as important tools in the field. As with many citizen science programs, the value of the work cannot be measured in numbers alone. Peter Callen, director of Pathways says, “As encouraging as the successes of these tracking programs are, the payoff comes to us as individuals as well, each time we step into nature as an honest student, ready to learn the day's lesson.” A star tracker with Pathways, Casey McFarland, explains further that at a certain point in tracking you begin to "see the animal you're trailing, more than just a set of prints on the ground, but visualizing the size, gait, and speed; the starts and stops, turns and movements of not only that animal, but of the ones whose trails you cross and contact along the way, and now you're seeing a movie, a video, of what just happened here." One of the lessons of identifying animal tracks usually involves humility. In my first tracking workshop in southern New Mexico, sponsored by Sky Island Alliance, I was pleased to learn the basics--the difference, say between a feline and canine print. Both have four toes. But cats—domestic, bobcat, mountain lion—have a leading toe, their claws rarely show, and the three lobes at the bottom of the pad are usually distinct. The overall print is round. Typically, the claws of a canine—dog, coyote, fox, or wolf—do show, and the three lobes of the pad may be blurred into a single line. Often a dog track has a mound of dirt in the center. The overall print is rectangular, and an X can be drawn through the print without crossing any of the pads. All this is less obvious in a partial print. And then there are back legs and front legs and soil surface and erosion and multiple tracks and the way the light is falling on the tracks and a dozen other circumstances and vagaries. As with most new skills, what increased first was my level of uncertainty. I soon learned to say with confidence, “I don’t have enough knowledge or information here to tell you who made this track.” Later I spent some wonderful afternoons with my local tracking team from Sky Island Alliance, as well as hours looking at tracks on the trails near my house. Yes, here was another “barefoot human” footprint with the big toe on the outside. And another. And another. A lot of bear (or possibly hobbits) seemed to use my favorite trail, too. And here was the print of a coati. And here—and this was a memorable moment—a mountain lion print. Soon I was on my hands and knees and then eye-level to the ground, trying to decide how fresh this mountain lion print might be. A few days? A few hours? A few minutes? I stood up and turned in a slow circle, newly-aware of my surroundings. Newly present in the world! Mountain lions are cautious when it comes to attacking prey. Much like you and me, they don’t want to get hurt and evaluate carefully how much trouble this meal might cause them. (I feel the same way about French cooking.) Now I made myself look too big and too much trouble to eat. I began talking loudly to myself—feeling only slightly silly. I was, of course, thrilled. I share this planet with mountain lions. This was today’s lesson.

Sharman Apt Russell’s Diary of a Citizen Scientist: Chasing Tiger Beetles and Other New Ways of Engaging the World (Oregon State University Press, 2014) was named by The Guardian as a top ten nature book of 2014 and listed as recommended reading by the Sigurd F Olsen Nature Writing Award. For more information, visit her website.