Can We Make Air Travel Safer From Volcanic Ash Hazards? 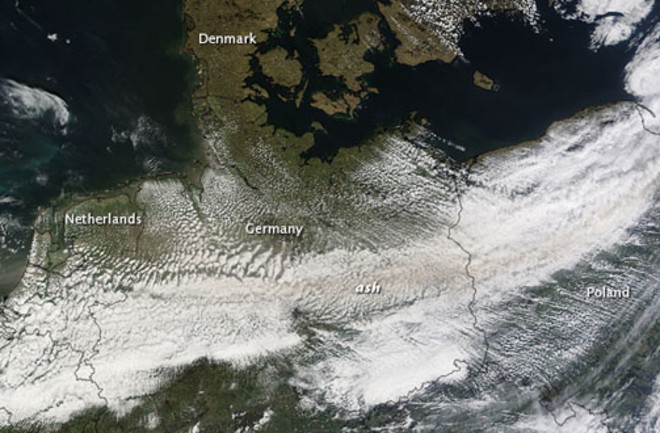 Volcanic ash from the eruption of Eyjafjallajökull spreading across Europe. Image: NASA Earth Observatory, acquired April 16, 2010 These days, when asked about recent volcanic "disasters," most people point to the air travel crisis spawned by the eruption of Iceland's Eyjafjallajökull. Now, since there was no loss of life, I tend not to consider that crisis a true "disaster," but a large-scale volcanic nuisance (as opposed to a real volcanic disaster such as the 1985 eruption of Nevado del Ruiz). However, the economic cost of the 2010 Eyjafjallajökull eruption was significant to many airlines across Europe and measured in the billions of euros (or dollars). Since that eruption, all ash clouds have been treated with great care, prompting airport and airspace closures to make sure aircraft can avoid flying through volcanic ash so we don't have to change that nuisance into a disaster. We've talked before about why volcanic ash is so bad for modern jet aircraft. Right now, airlines depend mainly on satellite imagery and local reports, filtered through the worldwide Volcanic Ash Advisory Centers (VAACs), to help planes avoid ash plumes. It is a system that isn't left up to the individual pilots -- they need to get information from people who might not be anywhere near their location ... and what if a plume hasn't been noticed via satellite or other methods? The biggest problem is not knowing exactly where, and at what concentration, the ash is at different atmospheric elevations. The holy grail for many airlines in areas that could face lengthy periods of ash in the atmosphere is to have the ability for individual aircraft to detect volcanic ash in the area and avoid it -- without necessarily relying on information from afar. Recently, Airbus, easyJet and Nicarnica Aviation tested a new device for detecting volcanic ash from individual aircraft. The AVOID (airborne volcanic object imaging detector) system uses infrared cameras that work in concert with information from the ground (or space) to help detect ash up to 100 km in front of a flying aircraft. This distance gives pilots 7-10 minutes to figure out how to avoid the ash, usually by lowering their flight altitude. Nicarnica says they can determine not only the location of ash, but also the concentration of ash on the fly, down to concentrations of volcanic ash as low as parts per billion in the air. Now, this sounds great in theory, but how do you test this system without flying an aircraft into the plume of an erupting volcano?

Icelandic ash being released by an Airbus A400M to make an artificial ash cloud. The cloud was used to test the AVOID system to detect volcanic ash in the atmosphere. Image: easyJet. Well, you just make your own ash cloud. The functional test of AVOID involved taking piles of Icelandic ash, loading it into a Airbus A400M (see right) and having it fly in circles at 9,000-11,000 feet while releasing the ash. Then, once you've got the ash in the air, take your test platform with the AVOID system and fly it into the artificial ash cloud. In this case, an AVOID-equipped Airbus A340 was flown behind the A400M releasing the ash, and the AVOID system was used to detect the location and concentrations of ash in the air. You can check out some video of the test here and see the artificial ash cloud being created as well. Now, testing a system like AVOID and implementing it on everyday commercial aircraft are very different things. You can see in the video that the current system being tested looks like it takes up about a third of the A340, so it needs to be scaled down in order for it to go into everyday use. That being said, easyJet says they will have these detectors installed on their aircraft by the end of 2014, so we're not that far from seeing everyday implementation of the AVOID system. The question will be whether other airlines worldwide follow their lead. Europe is not the only part of the world where a large, ashy eruption could impact air travel easily. Using the distribution of the 2010 Eyjafjallajokull ash in the atmosphere during the height of the eruption as a rough guide, areas over 3,000 kilometers (1,900 miles) away were being affected by volcanic ash. If we imagine a significant eruption from a volcano in the Cascades of the western United States (not an unlikely scenario), there would be volcanic ash spreading from Oregon/California/Washington all the way to Ohio! Of course, by the time the ash reaches the Midwest, its concentrations in the air would be low, but even low concentrations of ash can have long-term adverse effects on commercial aircraft. Imagine having to close the airspace across the United States from Portland to Chicago because airlines couldn't be sure where and at what concentrations was all that ash from Hood or Rainier or St. Helens. If easyJet does, in fact, get these systems installed in the next few years, it will be interesting to see how the next ash plume from Iceland or parts of Europe will be met by the airlines. It is one thing to test the system in controlled conditions like these. It is entirely another to entrust the safety of a few hundred passengers in an aircraft to the ability to correctly detect the volcanic ash in the air. However, this is a great step forward for both mitigating the effects of a volcanic ash disaster, and, hopefully, our understanding of the distribution of ash in the atmosphere after an eruption.