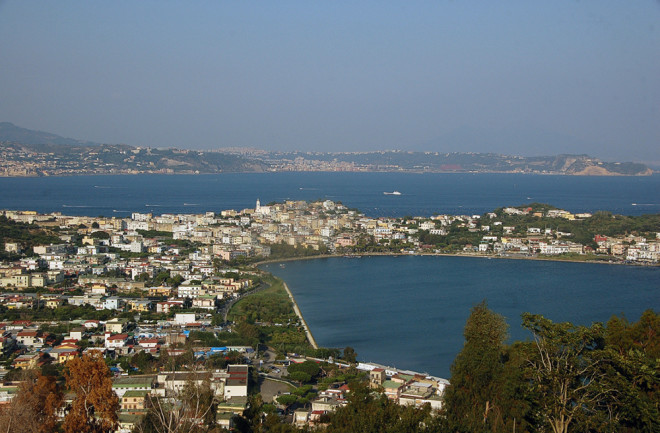 A view across the Campi Flegrei caldera at Pozzuoli. Wikimedia Commons. Most people would think that it would be hard to hide the evidence of a massive volcanic eruption. It shouldn't be hard to track down the source of tens of cubic kilometers of ash and debris because it should just get thicker and thicker until you reach the volcano that disgorged the mess. Yet, somehow, it isn't that easy. We live on a geologically active planet where all the processes of weather, tectonics, volcanism and more can quickly disassemble the deposits of an eruption -- even a giant one -- to the point where it might be challenging to pinpoint the source. One such example is a layer of ash found around the northern coast of the Mediterranean called the Y-3 ash. Some Y-3 ash had been dated to ~28.6 to 29.4 thousand years ago and the ash itself has a chemical composition that is a lot like one of the biggest volcanoes in the Mediterranean basin, the Campi Flegrei. Yet, although this ash can be found for thousands of miles away from the Bay of Naples (home to the Campi Flegrei), geologists had not found any matching volcanic deposits near the caldera volcano itself that could be the match to the Y-3 ash. So, what's going on? Part of the problem is the very active history of the Campi Flegrei. It has produced some of the largest explosive eruptions in Europe, including the massive Campanian Ignimbrite that erupted ~40,000 years ago and the Neopolitan Yellow Tuff (NYT) that erupted ~15,o00 years ago. The NYT likely blasted over 40 cubic kilometers of volcanic debris around the region while the Campanian Ignimbrite saw over 300 cubic kilometers erupted!

An outcrop of the Neopolitan Yellow Tuff near Naples. Wikimedia Commons. Yet, there are a lot of other ash deposits found around Europe, some of which match the composition of ash erupted from the Campi Flegrei. So, where are the deposits that fell near the volcano? Well, a lot of volcanic material can quickly be eroded after an eruption -- remember, it is mostly piles of loose debris. It can also be buried under younger eruptions, shifted by faults and generally mucked about by all sorts of land-changing processes. A new study by P.G. Albert and others in Geology may have found the matching partner for the Y-3. Looking at deposits nearby the Campi Flegrei, including a drill hole where geologists can access buried deposits, they found ash and debris that matches the composition of the Y-3. Not only that, they also dated some of the minerals in the ash (namely sanidine) and found that they overlap with the age of the Y-3 found across the Mediterranean -- all of which suggest an eruption age of ~29,o00 years ago. This eruption, which they dubbed the Masseria del Monte Tuff (MMT), was also big. It wasn't as massive as the Campanian or NYT, but still may have blasted out 16 cubic kilometers of volcanic debris. This would be what you might expect from a VEI 6 eruption, so something on the scale of Krakatau in 1883. Ash from the eruption may have fallen as thick as 1 centimeter over much of Greece -- 1,000 kilometers away!

Map showing the modeled distribution of ash from the newly identified MMT eruption from Campi Flegrei. Albert and others (2019), Geology. The MMT was sandwiched between the Campanian Ignimbrite (40,000 years ago) and the NYT (15,000 years ago) and Albert and others found that the MMT recycled some of the leftover crystals from the Campanian Ignimbrite (something we commonly see at volcanoes -- cannibalizing the crystallizing remains of the previous eruption). So, if you slot in the MMT, it reduces the average interval between big eruptions at the Campi Flegrei to ~12,900 years. Now, before we get all panicked, remember, most volcanoes scoff at recurrence intervals, especially ones built on 3 data points. These new data might suggest that the Campi Flegrei is the home of quite a few massive eruptions that might not be easily seen in the rock record near the volcano, but it really doesn't change the threat of the caldera. We know it is likely to erupt again and it could be quite catastrophic when it does. That's why monitoring the earthquakes, deformation of the land and the gas emissions are vital to look for signs of change that could be leading to an eruption. It never hurts to know about the history of a volcano because that's how we build models for the probability of types of eruptions at the volcano in question. Now we know a little more about the explosive history of the most dangerous volcano on the planet.