Calvin the Martian, and the True Meaning of LIFE 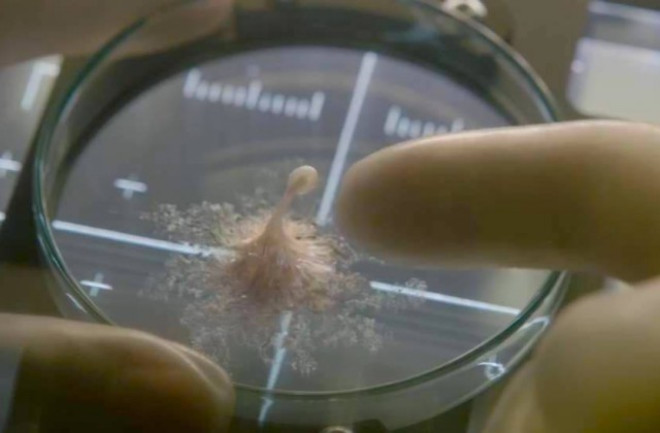 Calvin the alien: young, curious, and full of life. What could possibly go wrong? (Credit: Skydance/Columbia Pictures) LIFE the movie is both predictable and full of surprises, much like...er...life itself. In the broad sense, it is a monster-run-amok genre film. No spoilers there; you already know that if you've seen the trailers or even just the promotional posters. The interesting parts lie in the movie's details, which deviate from expectations in provocative ways. The setting of LIFE is not far away in a far-off future, as in Alien (an obvious source of inspiration), but aboard the International Space Station sometime within the next few years. The monster is not some arbitrarily conceived extraterrestrial, but (mild spoiler) a revived organism retrieved from Mars by a NASA spacecraft. And the monster's targets are not some hapless set of spaceship employees but a highly trained crew who nevertheless (hardly any spoiler at all) make a series of terribly bad decisions. Those signs of deeper thinking provide the best moments in LIFE. The space station setting looks and feels like a real space station. The idea of quarantining a Mars sample in orbit makes logical sense (although the way the sample arrives is more about cinema than celestial mechanics). Even the medical events in the movie are grounded in reality--due, in no small part, to the input of Kevin Fong, an expert in space medicine at University College London, who advised the movie. I spoke with Fong and director Daniel Espinosa, who previously directed the thriller Safe House, to explore their vision of the world of LIFE. I was especially curious to hear how they set the movie's balance between scientific verisimilitude and genre storytelling. An edited version of my conversation follows.

Oh right. It's a science fiction thriller. Of course something goes wrong. (Credit: Skydance/Columbia Pictures) What was your role in bringing a dose of reality to the imaginary world of LIFE?Kevin Fong: My day job is as an MD in anesthesia and intensive-care medicine, but I also work on an emergency helicopter, going to the scenes of accidents. There were elements of that work that informed some of the characters on the film. David Jodan [played by Jake Gyllenhaal] is a doctor and Miranda North [played by Rebecca Ferguson] is a doctor. At first, the filmmakers weren’t as interested in the technical reality of being a doctor as the emotional reality. Then were asking me about: What would a space doctor do? What are the effects of space flight on the human body? They did quite a lot of nasty things to their characters in that film, explosively decompressing them, shocking them, defibrillating them. All of that was stuff I had a hand in informing and trying to say, ah, you might want to think about doing it like this. And where they could, they accommodated. I was impressed. It’s easy to run roughshod over those details, and yet they didn’t. How specifically did they bring medical accuracy into the movie?KF: One of the scenes I was most involved in was the one with cardiac arrest. What I saw filmed was as close to what would happen in reality on a space station as you can get, with minor poetic license. It wasn’t like the usual medical scenes in films where something happens and you think, well, that’s just…not possible. You have to start by deconstructing the idea that half of the space station is a hospital. Most people think you wouldn’t go into space without taking the kitchen sink with you in medical kit. Actually it’s the reverse: you have very little kit up there, and very little skill set. They also rewrote some of the dialogue to make it more clipped and more businesslike. When I heard it I thought, that’s not far off the way I’d sound if were there. You don’t want to try to make the film exactly like reality because reality’s boring, which is why we go and watch films, but they were receptive. I could say, Why don’t you think of changing the look of this or why don’t you think of changing the line of that, and they would accept it if there was room for it in the script or the story. In a film about this fantastic idea of having contact with alien life running riot on a space station, you might think…once you’ve crossed that Rubicon, why pay any attention to reality? In fact it was the opposite, and I hope that helps the film. What do other movies most commonly botch about space medicine?KF: We spent a lot of time talking about what a heart rhythm looks like at the point when you shock your patient. It’s never a flat line. That’s the most often-made mistake in all of medical drama: the patient has a flat line on the ECG and they shock him. I spent a lot of time saying, look, you can’t shock someone out of that rhythm. It’s the jerky line which is a ventricular defibrillation. And people do not sit up, ask for a cup of tea, and tell you who the murderer is after you shock them out of cardiac arrest! Part of my goal was to make a film that annoyed medics as little as possible. The exact defibrillator they used in LIFE is outmoded, but the new type is so undramatic to watch that we couldn’t use it. Other than that… You have a background in space medicine, so you can also evaluate the Space Station set. How authentic did it feel?KF: It was impressive. They had sculpted it to be as close to the real thing as possible. It isn’t a facsimile of the International Space Station, but the size of the module, the dimensions, the sort of equipment they had dangling off the walls, it was all very familiar to me. If you’d told me this was a training mockup of a new module on the ISS I’d have no trouble believing it.

The set of LIFE feels realistic, and that much more menacing and claustrophobic. (Credit: Skydance/Columbia Pictures) Next I had a more extensive discussion with Daniel Espinosa about LIFE and especially about its alien protagonist, nicknamed Calvin by a group of schoolchildren. In one of the movie's more intriguing scientific imaginings, Calvin is described as having a unique biology, without the kind of specialized cells found in all higher organisms on Earth; every cell in Calvin's body functions as part of the creature's brain, eye, and muscle. But Calvin is also oddly familiar in other ways. Espinosa is a fan of old cinema and also a new father. Both of these sensibilities strongly influenced the look and tone of the movie. You have a one-year-old child; what perspective did new parenthood bring to the film? Did it change the way you approached your characters, especially your alien?Daniel Espinosa: A lot of those fears when you become a father, all those sides of yourself that you’re not proud of—the fear that you’re going to infect your child with those weaknesses, aggression or lack of it, whatever weaknesses you might have—that’s something that went into the depiction of Calvin. In the beginning he’s like a little baby, with the possibility of love. And then after being abused in his teenage years he strikes back and becomes this horrible, horrible ‘person.’ It sounds a bit ridiculous, but those fears were part of process. What are you saying about a possible future encounter with alien life? That what happens next depends on us as much as it does on the alien itself?DE: You know what Carl Sagan said: The issue with encountering extraterrestrial life is not so much what extraterrestrial intelligence would want to do to us, but how we would behave toward them. If you look at the past, how we encountered unknown cultures or characters, mankind does not have the best reputation in behavior quality. There is one great scene in which we see the world through Calvin's eyes. I wished we could have seen more of that, like in the Predator movies. Did you consider filming more of LIFE from an alien perspective?DE: I would have but then when we tied the movie together it was such a tightly knit basket. We decided to keep it that way. As a director you always have the instinct to decorate, but that would have made a very long movie!