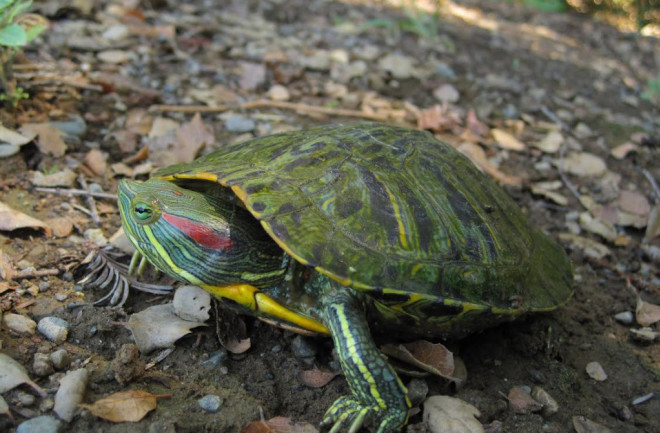 Citizen scientists document in collaboration with the Natural History Museum of Los Angeles help document reptiles and amphbians in Southern California to aid in conservation efforts. Find more information about participating in RASCals, the citizen science project on SciStarter and watch out for our herptile themed newsletter!

This June, I walked the wilds of Los Angeles looking for lizards. And snakes. And turtles. And because I was finally looking for them, I also began seeing them—and isn’t that a basic truth of life as well as citizen science? I visit Los Angeles for ten days twice a year as a teacher for the low-residency MFA graduate writing program at Antioch University. My time in nature is mostly spent in a few long runs near my hotel and in walking back and forth from the hotel to the university campus. This summer, wherever I went, I also took along my camera. I was on a mission for the Reptiles and Amphibians of Southern California (RASCals) citizen science project—to document any reptile or amphibian I came across and to send that image to the Natural History Museum of Los Angeles County. Greg Pauly, herpetologist at the museum and coordinator of RASCals, reminds me that over 22 million people live in Southern California (defined as the ten southernmost counties in the state), home to the sixth busiest airport in the world and the busiest container port in the United States. Los Angeles is a biodiversity “hot spot,” a place where many native species are threatened or endangered by habitat loss and the introduction of exotic species. The goal of RASCals is to discover where populations of native species still exist and where non-native species have invaded. This information is important since some non-natives (and their parasites) have ecological or economic consequences. Knowing where natives live also informs conservation efforts, habitat improvement and urban planning. But how to collect data from a landscape that is almost all private property—from those millions and millions of back yards? “We can’t do this through traditional research and collecting techniques,” Greg says. “Citizen science is the only way.” Building on the previous Lost Lizards of Los Angeles (LLOLA) project, Greg helped launch RASCals two years ago. Today he has over 7200 observations and nearly 600 participants. These citizen scientists sometimes provide the first documentation of a species. An eighth-grader and his father, for example, are now co-authors of a paper in Herpetological Review noting the presence of the exotic Mediterranean House Gecko (Hemidactylus turcicus) in the western San Fernando Valley. The team further helped determine that the geckos are an established population. Greg adds that this is one of six papers in Herpetological Review with the first county or state record of a species--all coming out of RASCals. Citizen scientists for RASCals also look at behavior. A March photo of an Indo-Pacific House Gecko hatchling showed that these reptiles were reproducing over the winter. Other citizen science data indicate that the non-native Green Anole is increasing its range and the non-native Brahminy Blind Snake more wide-spread than previously thought. In my walks through L.A. suburbia, my first encounter was with a stumpy Southern Alligator Lizard (Elgaria multicarinata) with a pretty banded back of pink and gray. These native lizards are known for their pugnacious self-defense. “Their bites can hurt,” Greg says fondly. “They can also climb trees. They have a real personality. You look at them, and they look back.” With its long prehensile tail, the alligator lizard can reach eleven inches. Mine did not. The tail was gone, likely dropped as an escape mechanism, with a new tail not yet grown in. I looked at her—yes, we had that sister thing going—and she looked back. Then she disappeared. Lizards are fast. In my June visit, I found myself stalking and running after a half dozen native Western Fence Lizards (Sceloporus occidentalis) with only a single blurry photo as a reward. One reptile—a turtle—and I seemed more evenly matched. The Red-eared Slider (Trachemys scripta elegans) rested in a strip of grass and dirt between the ponds of L.A.’s Ballona Wetlands and the traffic of HWY 1. Red-eared Sliders are common pets and native to the southern United States—but not to southern California. “What we have learned,” Greg Pauly says, “is that there are more non-natives than we even imagined there would be. These are populations we never knew about before.” Pauly hopes to increase his citizen science counts--perhaps exponentially. If just a fraction of those 22 million southern Californians, as well as the many millions of visitors like me, would stop to look, to see, to record…if only one percent of the 10 million people in Los Angeles County would take their smartphones or cameras into their backyard…California dreaming. We’d have a lot of data. Participating is easy. You can simply email your photos to rascals@nhm.org. The date and specific location are crucial, as well as any other observations you have. If you have more than a few photos, regular participants enjoy using the iNaturalist application and getting to know the online community.