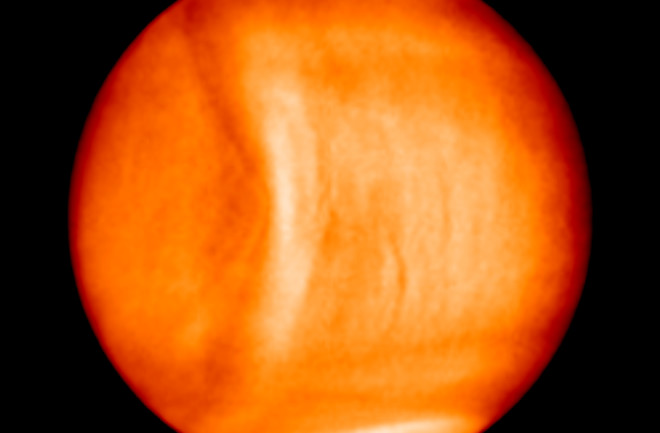 The massive bow wave is visible in the upper atmosphere of Venus in this infrared image. (Credit: ©Planet-C) A massive, bow-shaped wave was spotted for the first time in the highest regions of Venus' atmosphere, perplexing astronomers. The structure was captured by the Japan Aerospace Exploration Agency (JAXA) in some of the first images returned by their Akatsuki orbiter following a troubled orbital insertion in late 2015. Using both infrared and UV imaging, researchers spotted the prominent feature in the planet's upper atmosphere, where winds whip by in excess of 200 miles per hour. Any features spotted in the atmosphere should get carried along by the fierce winds, but this curved wave remained planted firmly in place, lasting for at least four days.

The wave extends for more than 6,000 miles, stretching nearly from pole to pole. It is marked by the presence of slightly warmer air in the upper portion of the planet's thick atmosphere, some 40 miles above the surface. While small aberrations are common in the upper atmosphere, such a large feature, to say nothing of one that refuses to move, is highly uncommon. Venus' atmosphere is in a state of super-rotation, meaning it moves much faster than the planet does. Venus rotates very slowly on its axis, completing just one rotation every 243 Earth days — longer than it takes the planet to go around the sun. On Earth, winds move only 10 to 20 percent the speed of the planet at most, but on Venus they far outpace the planet's stately spin.

The researchers believe that the enormous structure might be caused by so-called "gravity waves" in Venus' atmosphere. Gravity waves (which are entirely different than gravitational waves), are upheavals in a planet's atmosphere caused by winds colliding with features on the surface. In the case of Venus, mountainous features on the surface may be forcing winds into the upper atmosphere, where they slow down enough to create a lasting bow wave. Indeed, the atmospheric bulge is located above Aphrodite Terra, a continent-sized region of highlands. The researchers discuss their findings in a paper published Monday in Nature Geoscience.

An illustration of how gravity waves likely form on Venus. Surface winds are pushed upwards by topological features such as mountains into the upper atmosphere where they "break" like waves on a shore, slowing down high-altitude winds. (Credit: ESA) The bow wave was only spotted for four days near the beginning of Akatsuki's mission. When researchers looked again a month later, it had disappeared. Scientists have observed the presence of gravity waves in the upper atmosphere of Venus before — the European Space Agency's Venus Express orbiter found the telltale cloud shapes over the smaller Ishtar Terra region in 2014 — but those gravity waves were not nearly as large as the planet-spanning feature found by JAXA. Our understanding of gravity waves is currently based on models of Earth's atmosphere. On Venus, where the air is composed mainly of carbon dioxide and the atmospheric pressure is almost 100 times greater than that on Earth, the atmospheric dynamics are likely different. The waves could give astronomers another way to discern the terrain hidden beneath Venus' thick layer of opaque clouds.