Bringing a Magmatic System Back to Life: My Research at Lassen Peak and Chaos Crags 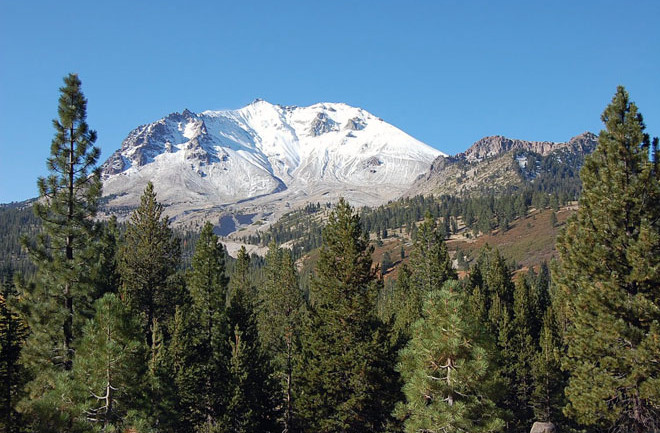 Lassen Peak in California, seen in October 2008. Image: Erik Klemetti So, I'm off to the American Geophysical Union Fall Meeting in San Francisco meeting tomorrow. This year, I will be presenting on my continuing research in the Lassen Volcanic Center (LVC) in northern California -- in fact, this is the first time I'll talk about some of my and my students' findings looking at the lavas and pumice from some of the more recent eruptions in the LVC. If you're interested, you can check out the abstract for my talk by visiting the Fall Meeting Scientific Program (sorry, no direct links, apparently) and searching for my name under "Fall Meeting Program". If you're at the meeting, you can come see me lead off the session (and the meeting) at 8:00 AM on Monday (December 9) in Moscone South 308. However, if you're not going to AGU, I thought it would be interesting to talk about why this research at Lassen is so fascinating. For those of you unfamiliar with the Lassen Volcanic Center, its most famous member is Lassen Peak. Now, Lassen Peak has had the most recent Cascade eruption that wasn't from Mount St. Helens, starting up in 1914 but peaking in 1915 and finally endings around 1917. The eruption was small, only 0.007 cubic kilometers of erupted dacite lava and tephra, but an eruption is an eruption in a range as quiet as the Cascades. However, go back ~1,100 years and the LVC was host to the eruption of Chaos Crags, a series of rhyodacite lava domes and associated volcanic deposits that totaled over 1.1 cubic kilometers of material. Go back even further, back 27,000 years and we reach one of the eruptions that built the main Lassen Peak edifice -- one that produced over 2 cubic kilometers of dacite lava and tephra. These are the three most recent silicic eruptions from the LVC -- that is, the ones erupting magmas with the most silica in their structure (we'll get back to why this is important). The LVC has also had a more mafic (lava with less silica) eruption, the 1666 eruption of Cinder Cone, but that is a story for another day. One great thing about silicic magmas, like dacite, rhyodacite and rhyolite, is that they can host zircon crystals (see below). That is what we've been examining for the past few years, these tiny but incredibly useful minerals. They are chock full of uranium and thorium (relatively speaking compared to other minerals) and also host many other trace elements (like hafnium, europium, ytterbium and more) that can tell us about the changing composition of the magmas in which they crystallized. The high concentrations of uranium and thorium allow us to date the crystals, or even individual parts of the crystals, and then match that age with compositional information from that same crystal. Thus, you can start to read back the compositional history that a zircon or a population of zircon has experienced. In my mind, that is incredibly fascinating because what these zircon do is record many of the events that happen in the subvolcanic magmatic system that occur between eruptions.

Three zircon from the 1915 dacite of Lassen Peak seen under cathodoluminescence. Image: Erik Klemetti So, what did we do? We extracted zircon from the 1915 and 27 thousand year old (ka) dacite, the Chaos Crags rhyodacite and analyzed them for ages and compositions at the Stanford/USGS SHRIMP-RG lab. The story they tell is of the rejuvenation of a crystal mush that started forming possibly as early as 300,000 years ago, during an earlier period of activity in the LVC. In fact, you might even think of the mush as the "protopluton", the early stages of the crystallization of a large body of magma underground. These magmas are the residue from the eruptions during the Bumpass Sequence at the LVC that ran from ~300,000 to 190,000 years ago. Then the LVC went quiet, with no evidence of eruptions from 190,000 to 90,000 years ago. Since 90,000 years ago, the LVC has produced a number of mainly small eruptions including Chaos Crags and Lassen Peak. The zircon we've examined span the range of ages from only a few tens of thousands years old to over 350,000 years old (the maximum age for which our dating method is reliable). What is most interesting is that a large portion of these zircon crystallized during that period where nothing was erupting, so they are our only record of what was happening under these volcanoes during that 100,000 year span. Think about that -- these zircon crystals, ripped out of a crystal mush during an eruption 98 years ago, can tell us what was happening under Lassen Peak over 100,000 years ago!

Complex magma mingling textures in lava from Chaos Crags. This is part of the evidence that basalt intrusions play a large role in triggered rejuvenation at the Lassen Volcanic Center. Image: Erik Klemetti Now, interestingly, none of the lavas from which we sampled zircon should have zircon in them. They are too hot, so zircon should be dissolving ... but there they are. Some are safe as inclusions in other minerals like plagioclase feldspar. However, we still find some happy in the groundmass between the mineral grains. This means whatever process ripped them from the crystal mush and got them incorporated into the erupted lava likely happened quickly (geologically-speaking), otherwise those zircon should have dissolved. You can calculate how long a zircon should persist before dissolving to get a maximum time between heating up the mush to release crystals and eruption and we get timescales of decades to millennia, depending on how hot the erupting lava is (probably 850-900ºC). So, add some basalt beneath the crystal mush and it will heat up, liberating zircon crystals and erupt in a relatively short time. Interestingly, these zircon timescales from small volume eruptions are pretty similar to those from examining quartz from a much larger eruption (the Bishop Tuff in Long Valley), so this might be one of those fundamental timescales of rejuvenating crystal mush before an eruption. Now, that is really the short version of what we're examining. What this could mean in that the erupts that lead up to the next eruption at the LVC started decades or centuries ago and underneath your feet are new rejuvenated bodies of magma. What is also means is that likely at any given time, there isn't a lot of eruptible magma just hanging around for a long time. Instead, you have a mush that can occasionally and locally heated up from below and creates bodies of eruptible magma that scavenge crystals from that mush. This makes for a lot more complex model that the classical "blob from hell" for a magmatic system under a volcano -- instead, the whole history of the volcanic system gets remixed and sampled for each successive eruption. Hope to see some of you at AGU next week!