Brightest Supernova Ever Seen Pushes Theoretical Models to the Edge 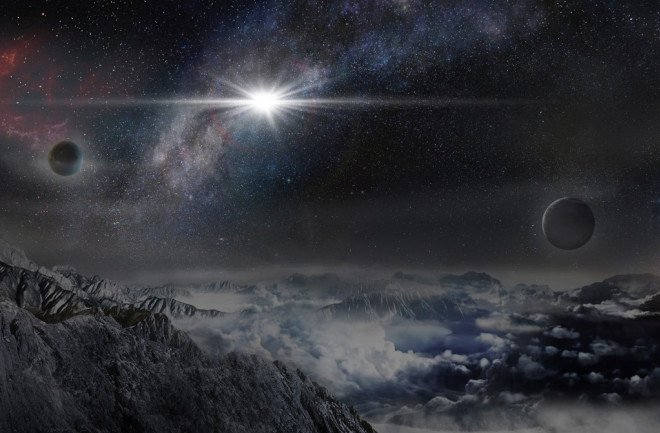 An artist's impression of the record - breakingly powerful, superluminous supernova ASASSN - 15lh as it would appear from an exoplanet located about 10,000 light years away. (Credit: Wayne Rosing) Researchers have discovered the brightest supernova ever seen, and the unusual object powering it could challenge what physicists know about dying stars. When massive stars die, they do not go gently into the night. Instead, they expel most of their mass outward in a powerful explosion called a supernova, leaving behind a glowing cloud of gas and the collapsed remains of the former star’s core. In June 2015, a supernova appeared in the sky over the Southern Hemisphere, and astronomers believe it could mark the death throes of a very unusual star. The supernova, named ASASSN-15lh, was 20 times brighter at its peak than the combined light of the Milky Way galaxy’s 100 billion stars, making it the brightest supernova ever observed. In fact, it’s twice as bright as the previous record-holder.

An exploding star releases a tremendous amount of energy, but it’s not enough to power anything as bright as ASASSN-15lh. Instead, a team of astronomers led by Subo Dong of China’s Kavli Institute say that the superluminous supernova could be getting its energy from an unusual object called a magnetar. They published their findings today in the journal Science. When a star dies, its mass collapses onto the core. Much of it gets blown away in an explosion about a second later, but what remains is a very dense mass of neutrons called a neutron star. Once in a while, a neutron star is born with a stronger magnetic field than usual – about 10 trillion times stronger than Earth’s magnetic field – and astronomers call these objects magnetars. Astronomers have found magnetars at the center of supernova remnants here in the Milky Way, but they’re nothing like the fast-spinning magnetar at the heart of ASASSN-15lh. Most magnetars rotate slowly, once every one to ten seconds, and they don’t release much energy into the surrounding supernova. But Dong and his colleagues think that the magnetar at the heart of ASASSN-15lh is rotating a thousand times a second. That’s right at the limit of how fast theoretical physicists believe a magnetar can rotate.

False-color images showing the host galaxy before the explosion of ASASSN-15lh taken by the Dark Energy Camera (left), and the supernova by the Las Cumbres Observatory Global Telescope Network 1-meter telescope network (right). (Credit: The Dark Energy Survey, B. Shappee and the ASAS-SN team) The energy from that fast rotation is the engine that powers the supernova. “As it slows down, and it rotates slower and slower and slower, what's happening is that it's shedding its rotatational energy,” explained coauthor Todd Thompson of Ohio State University. “It's flying out in this big energized wind that then shocks the supernova and makes it extra bright for us.” To produce a supernova as bright as ASASSN-15lh, nearly all of the the magnetar’s energy has to be converted into light. That kind of efficiency is technically possible but very rare, and it pushes the limits of how magnetars, as we know them, work. “You have to take a very fast-spinning magnetar and then extract all the energy from it to power what we have been seeing in this case,” says coauthor Kris Stanek, also of Ohio State University. The team says it’s an extreme scenario that’s right on the edge of what physicists consider possible for a magnetar, but they also say it’s the most plausible explanation for ASASSN-15lh’s unprecedented brightness.

The star that exploded to produce ASASSN-15lh would have been a massive, blue, hot star, rotating rapidly. It must have shed its outer layers of hydrogen and helium shortly before it died, because those elements are absent from the supernova. Several telescopes around the world have studied the supernova’s spectrum, the presence or absence of different wavelengths of light, which can tell physicists which elements are present in the gas cloud. It may have been a type of massive star called a Wolf-Rayet star, although astronomers can’t yet say for sure. “They’re stars that have no hydrogen or helium, and many of them are rapidly rotating, they are called Wolf-Rayet stars. I would say it's not impossible that it is somehow related to those type of stars, because we see those type of stars around, and they meet the qualifications that I just gave you: rare, no hydrogen or helium, massive, and at least a fraction of them are rapidly rotating.”

Because ASASSN-15lh is between 3.8 and 4 billion light years away, observers here on Earth are seeing the ghost of an explosion that happened billions of years ago, while our planet was still in the process of cooling. The light from that distant, long-ago explosion reached Earth in June of 2015, where it was first noticed by a pair of telescopes in Chile, part of the All-Sky Automated Survey for SuperNovae, or ASAS-SN, rather menacingly pronounced “assassin.” ASASSN-15lh is one of 180 supernovae discovered by ASAS-SN in 2015, and one of 270 discovered by the project since its start two years ago. “This particular story is an extreme example of something, and I'm very happy that we have found it,” says Stanek. “People have been studying supernovae for many decades now, and our project is just two years old, and yet, during these two years, we were able to find that object, which is challenging to everybody who is working on supernovae.”

Two of the 14-centimeter diameter lens telescopes in use for the All Sky Automated Survey for SuperNovae that discovered ASASSN-15lh. Since this photo was taken, two more telescopes have been added to the ASAS-SN station in Cerro Tololo, Chile. (Credit: Jin Ma (Beijing Planetarium) Studying the new supernova quickly became a collaborative effort, as larger telescopes in Chile and South Africa, and even NASA’s Swift space telescope, joined in to confirm the find and take higher-resolution images and spectra. In February 2016, the Hubble Space Telescope will gather images of ASASSN-15lh to help the team determine how close the supernova is to the center of its galaxy. If it’s in the galactic nucleus, astronomers may need to consider another explanation for ASASSN-15lh’s brightness, one involving a star’s interaction with a supermassive black hole. Stanek and Thompson say it’s an unlikely scenario, but one worth investigating.

Supernovae are what astronomers call transient events; they explode, and then they slowly fade. “The most important thing is going to be to get the spectra of it as it fades, because as it fades, it's getting cooler and bigger, and its luminosity is dropping," says Thomspon. “As it gets cooler, as it becomes less luminous, it becomes harder and harder to see, but it also means you can see through it better; it becomes more transparent.” That gives astronomers an opportunity to study the inner layers of the supernova, not just its outer edge. “Usually these things are found even further away, so in which case it's much harder to get good data. So we're getting as good data as possible,” says Stanek. Thompson and Stanek hope their find will push theoretical physicists to reevaluate their current models of magnetar formation and look for alternate explanations for ASASSN-15lh. “As a theorist working on these kinds of topics, it gets interesting when extreme events challenge conventional wisdom,” said Thompson. “A lot of times, that's when you can really push theoretical ideas and theoretical models to the limit.” Meanwhile, Stanek says that ASAS-SN will keep scanning the sky for other interesting new objects. “This approach of really just observing an entire sky as often as possible, is working,” he said.