Last August, veteran comet-hunter R. H. McNaught found a new snowball orbiting the Sun. Now called C/2006 P1 (McNaught), or just Comet McNaught, it's going to be visible for the next few days to the unaided eye, but you'll have to look carefully: even though it's getting incredibly bright, it's so near the Sun it'll be low to the horizon. Here's the view from my area tonight around 5:00 p.m. local time: 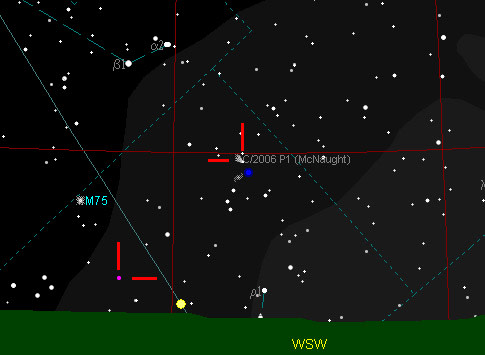 The Sun is the yellow circle just above the horizon (so, duh, it will still be up, but I wanted to show you the geometry). The comet is above and to the right of the Sun, and I've marked it with red lines. The marked pink dot to the lower left is Mercury, which will be a very tough object to spot. Venus will be a lot more obvious, far above and to the left of Mercury (all directions are for the northern hemisphere). People are reporting magnitudes of 0 and -1 for this comet, which is brighter than Jupiter (the fourth brightest object in the sky after the Sun, the Moon, and Venus). This would be a barnstormer if it were up high in the sky, but since it's so close to the Sun the bright twilight sky will wash a lot of it out. Still, this is very much worth going after if you have binoculars. For your own viewing conditions, I suggest going to Heavens Above (enter your latitude and longitude to get a local map) or Sky and Telescope's Comet McNaught page.