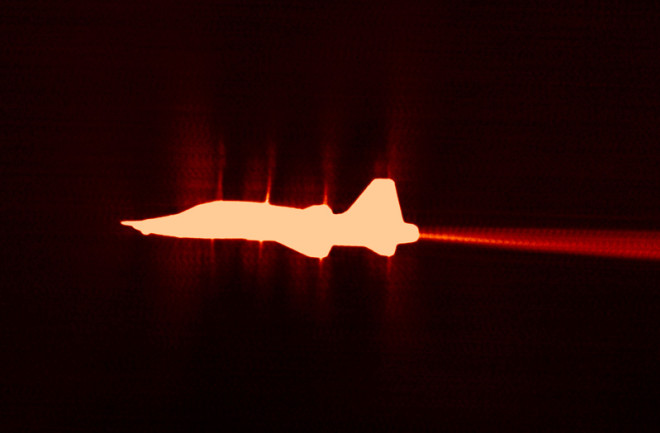 This schlieren image shows an Air Force Test Pilot School T-38 in a transonic state, meaning the aircraft is transitioning from a subsonic speed to supersonic. Above and beneath the aircraft, shockwaves are seen starting to form. (Credit: NASA) NASA wants to make sonic booms a little less…boom-y. When a jet breaks the sound barrier, it generates shockwaves that are eventually heard—and felt—on the ground as sonic booms. The boisterous nature of supersonic flight is one of the primary driving forces behind the Federal Aviation Administration's ban on supersonic flights over land. But NASA scientists are working to design an aircraft that can smash the sound barrier quietly, and that could cut travel times in the United States significantly if the technology is ever commercialized. But in order to quiet a boom, scientists need to see it to study it, and NASA is well on its way on both fronts. The space organization recently completed a series of test flights at its Armstrong Research Center to refine a photography technique that captures the moment a jet breaks the sound barrier, allowing researchers to visualize the shockwaves that are generated during that transition. NASA wants to roll out a its Low Boom Flight Demonstration (LBFD) aircraft in 2022, and it's hoped it can fly beyond Mach 1 air speeds without generating too much noise. They'll need to rely on a technique called schlieren photography to ensure their predictions match reality when the test their LBFD.

Schlieren comes from the German word "schliere," which means streak, and that's exactly what you see in this kind of photography. Invented by August Toepler in 1864, it allows researchers to study the flow of air around objects. It relies on the the fact that light rays bend whenever they encounter changes in density of a fluid—air, of course, being a fluid. In 2016, NASA tested a schlieren photography technique that used a special hydrogen filter, with cameras positioned to use the sun as a background, to visualize shockwaves. That first test relied on ground-based equipment with the camera some 40,000 feet from target. Future test images will need to be taken at closer range, and by equipment loaded onto a chase aircraft. Therefore, the photography equipment will need to be small enough to fit in a small wing pod without losing image quality. In this most recent test, NASA successfully applied this photography method from a range of 10,000 feet, which is similar to the range needed for an air-to-air system when LBFD flies. It required pilots to fly at supersonic speeds through a predetermined position in the sky that was about 100 feet in diameter. The test flights were flown using an U.S. Air Force T-38 aircraft, as well as a NASA F-15. In order for accurate images to be captured, pilots had to be in a precise location at a low altitude of 10,000 feet, directly between the cameras on the ground and the sun, and all while flying faster than Mach 1.