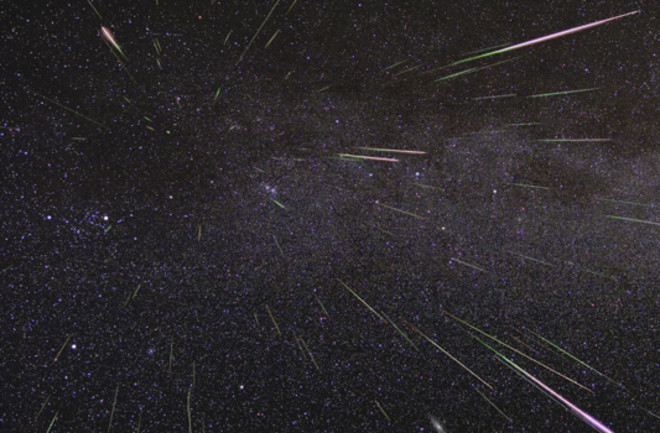 The Perseid meteor shower lights up the sky in August 2009. (Image credit: NASA/JPL) We’ve all heard of meteor showers, but according to astronomers, we may be due for a meteor storm starting late Friday night and persisting through Saturday morning U.S. time — and its prime visibility will be in North America. The Camelopardalid meteors are a brand-new attraction for the night sky, created by the dusty remnants of a comet named 209P/LINEAR which was discovered in 2004. Already the newcomers are generating a lot of buzz, with many headlines declaring this weekend’s shower a “once-in-a-lifetime” event. "The general consensus is that this week's Camelopardalids will be comparable to a very good Perseid meteor shower with an added possibility of a storm," Geoff Chester, astronomer at the U.S. Naval Observatory, told the Washington Post. "I'm planning to be out watching."

Astronomers are predicting anywhere from 30 to 100 meteors an hour at the peak of the show. You may be able to spot meteors streaking across the sky as early as 10:30 p.m. Friday, with the climax occurring from 2-4 a.m. Saturday morning. We can thank Jupiter for providing us the brand-new cosmic display. The gas giant’s gravitational pull altered the comet’s route, which allowed its debris trail to intersect with Earth for the first time this year. If you want to enjoy the late-night performance, just look up at the sky. If however you don't have a good view, you can tune into the Slooh Observatory’s live webcast of the show (below) to appreciate the meteor shower in its full splendor — or as splendorous as a meteor shower can be on a digital display.