Book Review: Citizen Science, How Ordinary People are Changing the Face of Discovery 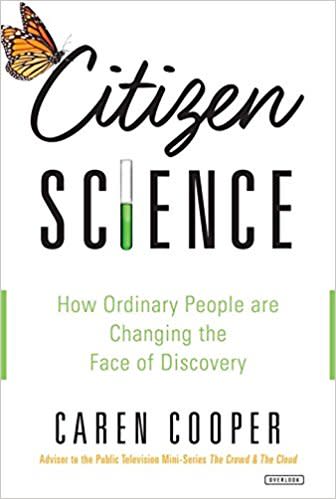 By Dr. Ashley Rose Mehlenbacher Caren Cooper. (2016). Citizen Science: How Ordinary People Are Changing the Face of Discovery. Overlook Press: New York, NY. $28.95. While publications proliferate on the subject of citizen science, an introduction to inform and delight all readers has been conspicuously absent until Caren Cooper’s new book, Citizen Science: How Ordinary People Are Changing the Face of Discovery hit the shelves this spring. In the pages of Citizen Science we find compelling stories of citizen scientists who shape the field as we now know it. Cooper tells these stories not only as entertainment, although her prose and humour certainly keeps readers entertained, but, importantly, to inspire readers to take up citizen science themselves. Cooper takes us all the way back to 1837, where we meet William Whewell—credited with introducing the term “scientist”—who won the prestigious Royal Medal from the Royal Society for his research on ocean tides. But no scientist works in a vacuum, a point Cooper makes clear as we learn about not just Whewell but the thousands of volunteers in coastal towns who made his distinction possible by sending with him their own observations and data, which he would use to test his theories. Since Whewell’s time, and even before then, a model of citizen science where researchers lead projects that everyday people participate in has prevailed in meteorology, ornithology, entomology, astronomy, biochemistry, and microbiology. These six broad disciplinary cuts shape the first six chapters of Cooper’s book. Each chapter offers examples of citizens contributing in fundamental ways to the success of numerous scientific research projects. Chapters on conservation biology, marine biology, geography, and public health begin to untangle more complicated and, to reveal my bias, more interesting forms of citizen science driven by indigenous knowledges and also grassroots efforts. Drawing readers in through the tales of what we now call citizen science, the introduction, “Marking the Tide” makes the case for the book. In a few short pages we are pulled into the present, fraught with difficult data collection problems, new communities becoming interested and involved in science, and questions of quality, authority, and sanctioning in the business of knowledge production. Part one of the book, Hobbies of Discovery, explores the importance of citizen scientists, who have an entirely different set of expertise based on broader observational work than many in-field experts may have. We also learn about the very human stories that propel citizen science, such as that of Fred Urquhart and his wife Norah Roden Urquhart and their quest to discover where monarch butterflies went during the Canadian winter (turned into an engaging film, Flight of the Butterflies). Indeed, it is stories that help explain why scientific research is such a compelling enterprise not only for professional scientists, but for citizen scientists as well. A chapter on astronomy drives the point home, showing how citizen scientists spend hours gazing into the night sky or, sometimes, into computer displays, to classify images of galaxies. Through science we are afforded perspectives on our own position relative to the immense known universe, and in Cooper’s book we learn how meaningful that is to the enterprising citizen scientists who continue to make important contributions in astronomy. The Necessity of Leisure, part two of the book, may be a bit of a misnomer, because the chapters that follow include an inspiring range of some serious work. Advances in computational tools and techniques have allowed for projects such as Folding@home to capitalized on otherwise down cycles on individuals’ personal computers. Or, consider, Foldit, a now-famous game in citizen science circles that doesn’t just capitalize on distributed computational resources, but on distributed cognitive resources. Humans, it turns out, are pretty good at solving protein folding problems, better than computers, and Foldit creates a game environment to help participants solve puzzles. But humans aren’t just cognitive machines—we have our own ecology that is ripe for exploration, too. Rob Dunn’s Bellybutton Biodiversity project, which had participants swab their navels for science, is an excellent example. In the final chapter of this section, Cooper explores how indigenous knowledges help us understand climate change, and why it is important to expand the kinds of knowledge-making practices that inform scientific work. We also learn about how to articulate different ways of knowing. Cooper offers a compelling story of a so-called “climate skeptic” who came to understand scientists’ practices and how they come about their understanding of climate change. Ultimately, he on to be an advocate for more sustainable practices. In A World Where Everybody Counts—my favourite section of the book—Cooper digs into stories of grassroots citizen science. She introduces a delightful tale of citizen scientists, volunteering with the North Carolina Wildlife Resources Commission to monitor sea turtle nesting, who then went on to form the grassroots Keep It Clean project. We revisit North Carolina to understand how citizens responded to pollution from hog farms, and also learn about how citizens in Tonawanda, New York examined suspected pollution sources driving up cancer rates, and other similar pollution-based concerns. These cases illustrate the significance of citizen monitoring efforts, and demonstrate how non-experts begin to learn the issues, the science, and the methods to make compelling cases. Finally in a chapter on public health, Cooper explores AIDS activism and the important lessons from this activism for citizen scientists working in public health arenas. These, of course, are but a few of the stories that support Cooper’s argument, illustrating the complexity, richness, and indeed citizenry of citizen science. Science remains an inspiring enterprise, full of verve and virtue, but there are moments when defeat visits, whether in the lab or more broadly as funding is threatened or evidence-based policies are eroded. Cooper’s book offers an important and uplifting intervention, reminding us of the enormous support for science in the everyday lives of non-professionals, who dedicate their unpaid time and their energy to advancing science and to conserving the natural world. Take a moment then, please, to dive into Cooper’s affirming stories of science, society, and social action.

Dr. Ashley Rose Mehlenbacher is an Assistant Professor specializing in rhetoric and science communication at the University of Waterloo, in Canada.