A recent post of Jen-Luc's reminded me of Huw Price and his work on temporal asymmetry. The problem of the arrow of time -- why is the past different from the future, or equivalently, why was the entropy in the early universe so much smaller than it could have been? -- has attracted physicists' attention (although not as much as it might have) ever since Boltzmann explained the statistical origin of entropy over a hundred years ago. It's a deceptively easy problem to state, and correspondingly difficult to address, largely because the difference between the past and the future is so deeply ingrained in our understanding of the world that it's too easy to beg the question by somehow assuming temporal asymmetry in one's purported explanation thereof. Price, an Australian philosopher of science, has made a specialty of uncovering the hidden assumptions in the work of numerous cosmologists on the problem. Boltzmann himself managed to avoid such pitfalls, proposing an origin for the arrow of time that did not secretly assume any sort of temporal asymmetry. He did, however, invoke the anthropic principle -- probably one of the earliest examples of the use of anthropic reasoning to help explain a purportedly-finely-tuned feature of our observable universe. But Boltzmann's anthropic explanation for the arrow of time does not, as it turns out, actually work, and it provides an interesting cautionary tale for modern physicists who are tempted to travel down that same road. The Second Law of Thermodynamics -- the entropy of a closed system will not spontaneously decrease -- was understood well before Boltzmann. But it was a phenomenological statement about the behavior of gasses, lacking a deeper interpretation in terms of the microscopic behavior of matter. That's what Boltzmann provided. Pre-Boltzmann, entropy was thought of as a measure of the uselessness of arrangements of energy. If all of the gas in a certain box happens to be located in one half of the box, we can extract useful work from it by letting it leak into the other half -- that's low entropy. If the gas is already spread uniformly throughout the box, anything we could do to it would cost us energy -- that's high entropy. The Second Law tells us that the universe is winding down to a state of maximum uselessness. 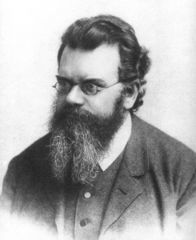 Boltzmann suggested that the entropy was really counting the number of ways we could arrange the components of a system (atoms or whatever) so that it really didn't matter. That is, the number of different microscopic states that were macroscopically indistinguishable. (If you're worried that "indistinguishable" is in the eye of the beholder, you have every right to be, but that's a separate puzzle.) There are far fewer ways for the molecules of air in a box to arrange themselves exclusively on one side than there are for the molecules to spread out throughout the entire volume; the entropy is therefore much higher in the latter case than the former. With this understanding, Boltzmann was able to "derive" the Second Law in a statistical sense -- roughly, there are simply far more ways to be high-entropy than to be low-entropy, so it's no surprise that low-entropy states will spontaneously evolve into high-entropy ones, but not vice-versa. (Promoting this sensible statement into a rigorous result is a lot harder than it looks, and debates about Boltzmann's H-theorem continue merrily to this day.) Boltzmann's understanding led to both a deep puzzle and an unexpected consequence. The microscopic definition explained why entropy would tend to increase, but didn't offer any insight into why it was so low in the first place. Suddenly, a thermodynamics problem became a puzzle for cosmology: why did the early universe have such a low entropy? Over and over, physicists have proposed one or another argument for why a low-entropy initial condition is somehow "natural" at early times. Of course, the definition of "early" is "low-entropy"! That is, given a change in entropy from one end of time to the other, we would always define the direction of lower entropy to be the past, and higher entropy to be the future. (Another fascinating but separate issue -- the process of "remembering" involves establishing correlations that inevitably increase the entropy, so the direction of time that we remember [and therefore label "the past"] is always the lower-entropy direction.) The real puzzle is why there is such a change -- why are conditions at one end of time so dramatically different from those at the other? If we do not assume temporal asymmetry a priori, it is impossible in principle to answer this question by suggesting why a certain initial condition is "natural" -- without temporal aymmetry, the same condition would be equally natural at late times. Nevertheless, very smart people make this mistake over and over, leading Price to emphasize what he calls the Double Standard Principle: any purportedly natural initial condition for the universe would be equally natural as a final condition. The unexpected consequence of Boltzmann's microscopic definition of entropy is that the Second Law is not iron-clad -- it only holds statistically. In a box filled with uniformly-distributed air molecules, random motions will occasionally (although very rarely) bring them all to one side of the box. It is a traditional undergraduate physics problem to calculate how often this is likely to happen in a typical classroom-sized box; reasurringly, the air is likely to be nice and uniform for a period much much much longer than the age of the observable universe. Faced with the deep puzzle of why the early universe had a low entropy, Boltzmann hit on the bright idea of taking advantage of the statistical nature of the Second Law. Instead of a box of gas, think of the whole universe. Imagine that it is in thermal equilibrium, the state in which the entropy is as large as possible. By construction the entropy can't possibly increase, but it will tend to fluctuate, every so often diminishing just a bit and then returning to its maximum. We can even calculate how likely the fluctuations are; larger downward fluctuations of the entropy are much (exponentially) less likely than smaller ones. But eventually every kind of fluctuation will happen.