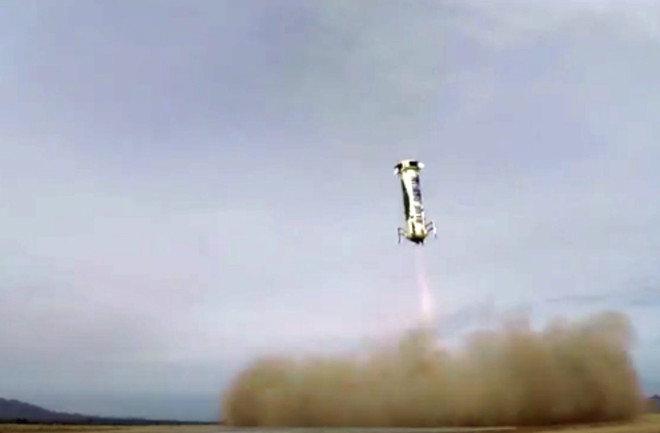 The New Shepard inches closer to the ground for a successful landing. (Screenshot from YouTube/Blue Origin) Private aeronautics firm Blue Origin on Monday became the first company to successfully launch a rocket into space and bring it back to Earth for a safe landing. The rocket, dubbed the New Shepard, took off from Blue Origin’s test facility in Texas and touched down again fully upright, in a near-perfect reverse of its takeoff just minutes before. Most rockets used to launch capsules into space are used once, falling into the ocean after their fuel is expended. This means that a new rocket must be manufactured every time a rocket is launched, making repeat flights to be tremendously expensive. With Monday’s successful launch and subsequent landing, we’re inching ever closer to a new era of space tourism.

Owned by Amazon founder Jeff Bezos, Blue Origin’s goal is to bring customers into sub-orbital space with their rocket, jettisoning a manned capsule at the apex of each flight to afford space tourists a few precious minutes of weightlessness before they are reclaimed by Earth’s gravitational pull. Since its inception in 2000 the company has maintained a low profile as it tweaked and perfected its rocket. That all changed with Monday's launch, however.

Landing a rocket is a big deal because it moves companies such as Blue Origin closer to achieving a cost efficient means of transporting humans and cargo into space and back. SpaceX, a commercial aeronautics company owned by Tesla founder Elon Musk, has been endeavoring to accomplish the same feat with their Falcon 9 rocket. However, their attempts to land a rocket returning from space on an unmanned barge in the ocean have so far been unsuccessful. The New Shepard accomplished its feat with the help of the BE-3 engine developed by Blue Origin, which is capable of producing up to 110,000 pounds of thrust at liftoff and then throttling down to only 20,000 pounds of thrust during the landing. The rocket also features a ring fin at the top, which relocates the center of pressure to increase stability, as well as pivoting fins at the base that allow the rocket to steer. Hydraulic stabilizing arms extend during the landing to support the rocket as it touches down. New Shepard vs. Falcon 9 While successfully landing a rocket after a suborbital flight is a huge milestone for aeronautics, there is a sizable difference between flying to the edge of space — suborbital spaceflight — and reaching orbit. As Musk pointed out in a series of tweets Tuesday, his company’s spacecraft is much bigger and travels much faster than the New Shepard, making it considerably more difficult to land it back on earth. Musk's goal isn't to simply send tourists into space, he wants to build a rocket that can send astronauts to Mars and bring them back.

Getting to space needs ~Mach 3, but GTO orbit requires ~Mach 30. The energy needed is the square, i.e. 9 units for space and 900 for orbit.

In any case, the New Shepard's successful flight is great news for anyone who has dreamed of going to space. While the company has stated that it will be several more years before paying customers get a chance to ride, you can unofficially request tickets online right now