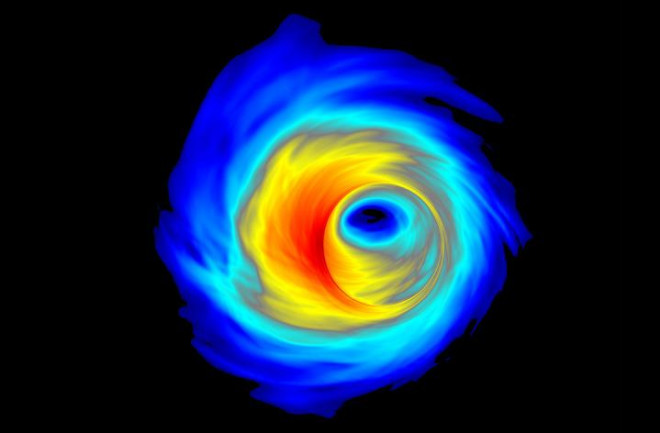 When the LIGO collaboration first detected the spacetime ripples of a gravitational wave it came from the merger of two black holes. To date, scientists have detected at least ten pairs of black holes spiraling into and combining with each other.

But there’s still an outstanding mystery about these singularities: why are some of them so big? Some have been far larger than scientists think possible for a black hole created in the aftermath of a star’s death.

Now, a group of researchers has proposed a new possibility. Black holes in the accretion disk surrounding a galaxy’s central supermassive black hole might gather in similar orbits. This could lead black holes to go through multiple mergers, growing larger each time.

The researchers created simulations to show that this was possible and described their results in the journal Physical Review Letters.

On July 29, 2017, gravitational wave detectors spotted the heaviest black hole merger yet, dubbed GW170729. One of the black holes in the merger was likely more than 50 times the mass of the sun. Black holes that are created when a dying star collapses shouldn’t be this big, so astronomers think something else was probably at play. Maybe that black hole was the result of a previous merger itself.

One place where a black hole might swallow multiple other singularities is in an environment that’s dense with stars. Globular star clusters, for example, pack lots of stars — and the black holes they sometimes form — into a relatively tight space. There, a black hole might meet and combine with other black holes multiple times.

The researchers created simulations of these orbiting black holes and found that s series of mergers would create black holes that are 50 or more solar masses, like the more massive black hole in the merger GW170729.

The mergers from black holes orbiting a supermassive black hole would probably have rotation characteristics distinct from other merger scenarios. As gravitational wave detectors spot more black hole mergers, their data might be a way to tell whether these oddly large black holes are really created this way.

So far, scientists have identified 10 confirmed mergers of black hole pairs. But there have been many more gravitational wave detections that are black hole merger candidates, which scientists are working to confirm.

“Whatever questions we’re asking, we’re going to have a much, much better handle on answering them within a very short time period,” said Imre Bartos, an astronomer at the University of Florida, Gainesville, and one of the authors of the new paper. “It’s super exciting.”