Black Holes Flicker as They Stop Gorging Themselves on Matter 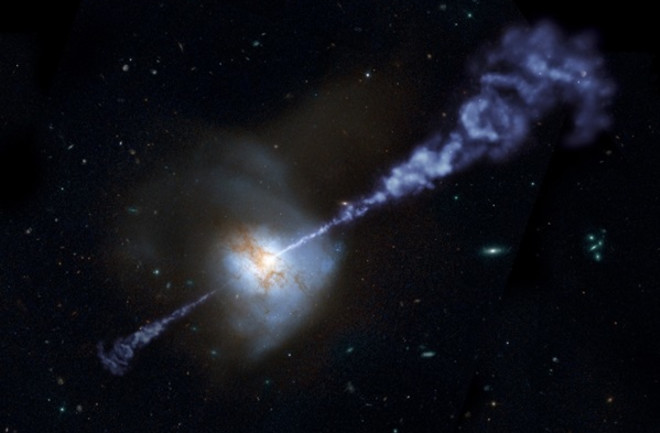 Black holes are by nature difficult to study directly. Because even light cannot escape these massive objects, astronomers must turn to other methods to spot and study them. While information is lost once it crosses a black hole’s event horizon, outside that boundary, it can still escape. A recent study, led by a graduate student in the Department of Astronomy of the Universidad de Chile, has now found that the amount of light emitted from around a black hole is determined by one thing, and one thing only: the rate at which matter is falling into the black hole. The research, published September 4 in the Astrophysical Journal, was aimed at determining the physical mechanism behind the variability observed from the active black holes at the centers of galaxies (known as active galactic nuclei, or AGN), which are supermassive black holes currently sucking in matter. In astronomy, this process is known as accretion. Such black holes have accretion disks, which are disks of matter swirling around them as it is funneled inward, like water going down a drain. Outside the event horizon, these disks shine brightly as the material inside is heated by friction, giving off visible light and even more energetic light, such as X-rays. These disks are also variable — astronomers aren’t exactly sure why, but the current understanding is that as clumps of matter interact in the disk or fall into the black hole, it causes changes in the light the disk emits.

The team combined data from the Sloan Digital Sky Survey and the QUEST-La Silla AGN Variability Survey to combine physical properties —the mass and the accretion rate, or the speed at which a black hole is eating — of about 2,000 AGN with information about their variability. What they found was surprising: “Contrary to what was believed, the only important physical property to explain the amplitude of the variability is the AGN accretion rate,” said Paula Sánchez-Sáez, the student who led the study and first author of the paper, in a press release.

Out With The Old

Why is this surprising? “The results obtained in this study challenge the old paradigm that the amplitude of the AGN variability depended mainly on the luminosity of the AGN,” Sánchez-Sáez said. What this means is that previously, astronomers assumed that more luminous (brighter) AGN varied more, while less luminous (dimmer) AGN varied less. This study instead discovered that the rate at which a black hole is eating is the only thing that affects the amount its light varies, regardless of whether it is bright or dim.

But the challenge to previous thinking makes sense, Sánchez-Sáez said, because in the past, it’s been difficult to accurately measure a black hole’s mass, and thus its accretion rate. Only with newer data provided by large surveys can astronomers begin to build up the numbers they need to test their assumptions.

With Black Holes, Less is More

Furthermore, the study revealed a relationship that may seem backwards: “What we detect is that the less they [black holes] swallow, the more they vary,” said Paulina Lira of the Universidad de Chile and the CATA Center for Excellence in Astrophysics, and a co-author on the paper. In scientific terms, the amplitude (amount) of variability is inversely proportional to the accretion rate, or the amount of food a black hole is consuming at any given time.

This initial study was based on variability information from the QUEST-La Silla AGN Variability Survey spanning about five years. Now, the researchers are looking to study the variability of these objects in greater detail, for which they’ll need more data. That means staring at these AGN for longer periods of time — at least 10 years or more. For that, they’ll need to wait for future surveys, such as those proposed with the Large Synoptic Survey Telescope, which is expected to reach full science operations by 2023. This will “extend our light curves to an order of 20 years,” said Lira, providing an even more accurate picture of the black hole’s behavior over longer periods of time.