Astronomers have discovered supermassive black holes at the center of numerous galaxies, including our own. Now a new theory explains why. 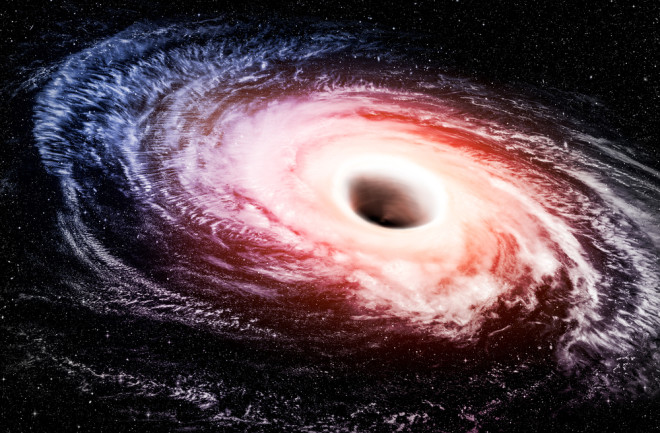 One of the great mysteries in astronomy is how galaxies form. At issue is why stars gather into “island universes” rather than spreading out evenly through the universe.

One clue comes from the observation that most galaxies contain massive black holes at their centers. That has led to the proposal that galaxies form around black holes which act as seeds for this process.

But there is a problem with this idea. If it is true, something must stop stars from falling into black holes as they form, but nobody knows what.

Now a new theory of black holes explains this process. The new theory “gives a general mechanism by which a central black hole can catalyze galaxy formation,” says Stephen Adler, at Princeton University in New Jersey.

Adler’s new theory is based on the way black holes interact with dark energy, which astronomers think fills the universe. This energy, he says, causes black holes to leak matter, creating a “wind” of particles that stream away.

When this wind collides with infalling matter, the momentum cancels out leaving the products of the collision a certain distance from the black hole. It is this matter that then forms into stars.

That’s an interesting idea that could finally explain how galaxies form and why black holes play an essential part in the process.

However, Adler is the first to admit that his new theory needs to be developed further. For example, his early calculations focus on non-rotating black holes, which are simpler to tackle theoretically. More work is needed to understand how a rotating black hole can produce this kind of “wind”.

Then there is the issue of the angular momentum that stars must acquire to end up in orbit around a black hole. The new theory will have to account for this momentum. Adler has raised these and other issues that his theory needs to address.

Beyond that is observational evidence. If Adler is correct, and black holes do emit a “wind” in this way, astronomers ought to be able to see evidence of it, perhaps even in our own galaxy which hides a supermassive black hole called Sagittarius A* at its center. What form this evidence should take is an important question for Adler.

The process of star formation near black holes should also be visible, particularly for the first generations of stars in the early universe. However, this early epoch is not currently visible to astronomers.

Fortunately, astronomers have built a telescope capable of observing these conditions in the early universe. The device, called the James Webb Space Telescope, was successfully launched earlier this month and is currently on course to begin observations later this year.

With any luck, by then Adler will have a better idea of exactly what to look for.

Ref: Mechanism By Which a “Leaky” Black Hole can Catalyze Galaxy Formation : arxiv.org/abs/2112.12491