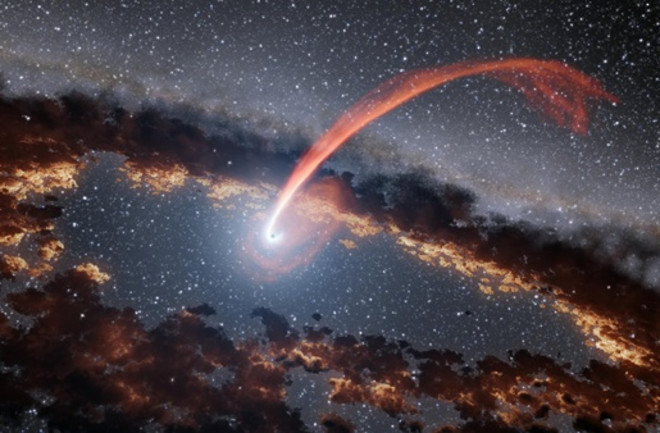 After falling past the event horizon — the point of no return — nothing can escape a black hole. While the depths of black holes may forever remain a mystery, astronomers can observe the regions around them. In a paper published September 3 in the Monthly Notices of the Royal Astronomical Society, a team of researchers reported, for the first time, spotting a clump of matter falling directly into a distant black hole at nearly one-third the speed of light.

The observations, which come from the European Space Agency’s orbiting XMM-Newton X-ray observatory, are of the 40 million-solar-mass supermassive black hole at the center of the galaxy PG211+143, about one billion light-years away. PG211+143 is a Seyfert galaxy, meaning it hosts a bright, actively feeding black hole at its center pulling in gas and dust from its surroundings. By spreading the X-ray light received from that material out by wavelength, researchers led by Ken Pounds of the University of Leicester clocked a clump of matter falling into the black hole at 30 percent the speed of light — about 56,000 miles per second (90,000 kilometers per second). “We were able to follow an Earth-sized clump of matter for about a day, as it was pulled towards the black hole, accelerating to a third of the velocity of light before being swallowed up by the hole,” said Pounds in a recent press release.

Peculiarly, the infalling gas showed no rotation — it was not moving in the same way as the larger accretion disk shining around the black hole — from its initial distance at only about 20 times the black hole’s size when it was first spotted.

The traditional “picture” of a black hole has a compact, massive object at the center surrounded by a disk of hot gas. This arises from the fact that, because black holes are so small compared to the mass they hold, infalling matter cannot all simply cram into the black hole at once — instead, it forms a swirling disk, like water flowing down a drain, and eventually approaches the black hole to fall in. As matter moves from the outer disk toward the event horizon, it loses gravitational potential energy, which is converted into radiation that astronomers can observe.

In this traditional picture, the orbits of material inside the accretion disk are assumed to align with the spin of the black hole itself, forming one single disk. But with that in mind, this observation, in which the infalling matter showed little rotation, is puzzling — at least, until the introduction of recent computer models also developed at the University of Leicester and run using the U.K.’s DiRAC supercomputer facility.

The theory and models consider the fact that matter can fall toward a black hole from any direction. Perhaps instead of just one disk, multiple, misaligned accretion disks can form as matter streams in. Matter can then “tear” away from these disks, forming rings of material that, if they collide, cancel out their rotation, allowing the material to flow directly into the black hole — just as the astronomers observed.

Such a process, dubbed “chaotic accretion,” might be likely in objects such as the supermassive black holes at the centers of galaxies, which can accrete enormous amounts of material, particularly early in their lives or following close interactions with other galaxies. Chaotic accretion could, over time, slow down the spin of a supermassive black hole, which would allow the black hole to more easily gobble matter and grow quickly — and shine brightly — which are characteristics observed in these objects throughout the early universe.