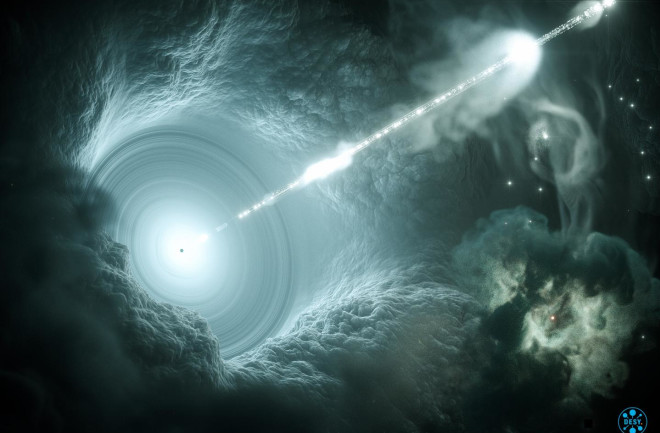 Four billion years ago, an immense galaxy with a black hole at its heart spewed forth a jet of particles at nearly the speed of light. One of those particles, a neutrino that is just a fraction of the size of a regular atom, traversed across the universe on a collision course for Earth, finally striking the ice sheet of Antarctica last September. As it hit, a neutrino detector planted by scientists within the ice recorded the neutrino’s charged interaction, causing a blue flash of light that lasted just a moment. The results are published today in the journal Science.

This detection marks the second time in history that scientists have pinpointed the origins of a neutrino from outside of our solar system. And it’s the first time they’ve confirmed that neutrinos are created in the supermassive black holes at the centers of galaxies — a somewhat unexpected source.

Neutrinos are highly energetic particles that rarely ever interact with matter, passing through it as though it weren’t even there. Determining the type of cosmological events that create these particles is critical for understanding the nature of the universe. Before this, the only confirmed source of neutrinos — other than our sun — was a supernova that was recorded in 1987.

Physicists have a number of theories about what sort of astronomical events may create neutrinos, with some suggesting that blazars could be a source. Blazars are massive galaxies with black holes at their center. When they try to suck in too much matter at once, it can cause jets of particles to be ejected outward at incredible speeds. Acting like the giant counterparts to terrestrial particle accelerators, blazar jets are believed to produce cosmic rays that can in turn create neutrinos.

“This [detection] in particular is a chance of nature,” says Darren Grant, a lead scientist of the team that first discovered the high-energy neutrino, as part of the neutrino detection project IceCube. “There’s a blazar there that just happened to turn on at the right time and we happened to capture it. It’s one of those eureka moments. You hope to experience those a few times in your career and this was one of them, where everything aligned.”

This image combines a real photograph of the IceCube Lab in Antarctica with an artist's rendering of the project's sensors deep below the ice and the distant blazar from which a neutrino has been detected. (Credit: IceCube/NSF)

This image combines a real photograph of the IceCube Lab in Antarctica with an artist’s rendering of the project’s sensors deep below the ice and the distant blazar from which a neutrino has been detected. (Credit: IceCube/NSF)

On September 22, 2017, the neutrino reached the Antarctic ice sheet, passing by an ice crystal at just the right angle to cause a subatomic particle (called a muon) to be created from the interaction. The resulting blue flash was recorded by one of IceCube’s 5,160 detectors, embedded within the ice. Grant was in the office when the detection occurred. This neutrino was about 300 million times more energetic than those emitted by the sun.

Grant and his colleague briefly admired the excellent image depicting the trajectory of the muon, which provides basic information necessary to begin tracing back the neutrino’s origin. However, they weren’t overly excited quite yet. His team observes about 10 to 20 high-energy neutrinos each year, but the right combination of events — in space, time and energy, for example — is required to precisely pinpoint the source of the neutrino. Such an alignment had eluded scientists so far. As Grant’s team began their analysis, though, they began to narrow in on a region: an exceptionally bright blazar called TXS 0506+056.

Following the detection, an automatic alert went out to other astronomy teams around the world, which monitor various incoming cosmic signals, such as radio and gamma rays. A few days later a team of scientists using the MAGIC telescope in the Canary Islands responded with some exciting news: the arrival of the neutrino had coincided with a burst of gamma rays – which are extremely energetic photons – also coming from the direction of TXS 0506+056.

Other teams saw changes in X-ray emissions and radio signals, too. Collectively, the data is a huge step forward for physicists in understanding blazars, and high-energy cosmological events in general.

To learn more about neutrinos, check out our 2014 magazine report: “Neutrinos: Ghosts of the Universe”

John Learned of University of Hawaii, Manoa, who was not involved in the study, says that the data linking the blazar as the source is “overwhelmingly convincing” and he emphasizes the importance of this finding. “This is the realization of many long-standing scientific dreams. Neutrinos at high energies can tell us about the guts of these extremely luminous objects … The implications of the finding are that we are now finally … [able] to see inside the most dense and luminous objects, and to further our grasp of the ‘deus ex machina’ which drives them and powers these awesome phenomena.”

For example, this detection also provides the first evidence that a blazar can produce the high-energy protons needed to generate neutrinos such as the one IceCube saw. Sources of high-energy protons also remain largely a mystery, so the identification of one such source is another big step forward for astronomers. “It’s really quite convincing that we’ve unlocked one piece of that puzzle,” says Grant.

The alert IceCube sent once the neutrino's interaction with the ice was detected resulted in follow-up observations from about 20 Earth- and space-based observatories. This immense effort resulted in the clear identification of a distant blazar as the source of the neutrino — as well as gamma rays, X-rays, radio emission, and optical light. (Credit: Nicolle R. Fuller/NSF/IceCube)

The alert IceCube sent once the neutrino’s interaction with the ice was detected resulted in follow-up observations from about 20 Earth- and space-based observatories. This immense effort resulted in the clear identification of a distant blazar as the source of the neutrino — as well as gamma rays, X-rays, radio emission, and optical light. (Credit: Nicolle R. Fuller/NSF/IceCube)

Gems From The Past

And it gets even better. “We looked back at [archival] data [that had been collected since 2010], in the direction of this particular blazar source, and what we discovered was really quite remarkable,” Grant says. A barrage of high-energy neutrinos and gamma rays from TXS 0506+056 reached Earth in late 2014 and early 2015. At the time, IceCube’s real-time alert system was not fully functioning, so other scientific teams were not aware of the detection. But now these previous neutrinos are on scientists’ radar, providing a more long-term glimpse into the life of a blazar.

“That was really icing on the cake, because what [the archived data indicated] was that the source had been active in neutrinos in the past, and then again, with this very high-energy neutrino in September — those are the pieces that really start to come together, to make a picture of what’s happening there,” explains Grant.

The data also reveal that radio emissions from TXS 0506+056 gradually increased in the 18 months leading up to the September neutrino detection. Greg Sivakoff, an associate professor at the University of Alberta who helped analyze the data, says one possibility is that the black hole began to consume surrounding matter much faster during this time, causing the jet of particles being emitted to speed up. He says, “If the jet gets too fast too quickly, it might run into some of its own material, creating what astronomers call a shock. Shocks have long been used in astronomy to explain how particles are accelerated to high energies. We are not sure that this is the answer yet, but this may be part of the story.”

Scientists are continuing to monitor TXS 0506+056, hoping to learn more about this colossal event. One team conducted a detailed analysis to determine how far away the blazar is from us, astounded to discover that it is a whopping four billion light years away. While TXS 0506+056 was always considered a bright object in the sky, this luminosity at such a distance makes it one of the brightest objects in the universe. No doubt future studies of this powerful blazar will yield valuable insights into the most energetic events to occur in our universe.

Learned says, “We are just opening a new door and I would love to be able to say what we shall find beyond. But I guarantee that initiating this new means of observing the universe will bring surprises and new insights. In an extreme analogy it is like asking Galileo what his new astronomical telescope will reveal.”