Billions of planets in our galaxy have the potential for life. Now  astronomers are developing powerful yet affordable ways to find it. 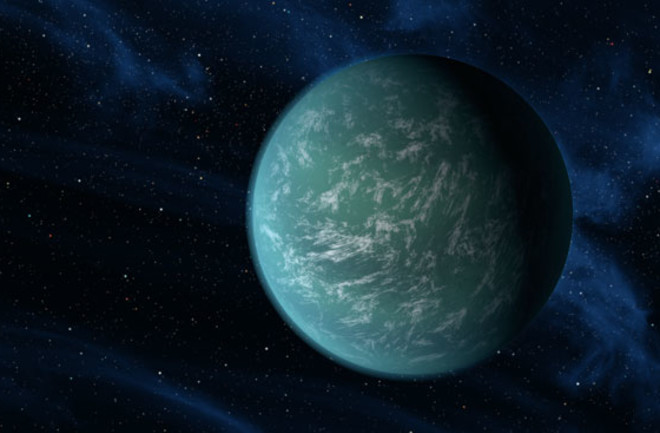 Artist's concept of Keppler 22b, which is 2.4 times the size of Earth. | NASA/AMES/JPL-CALTECH

Last December astron omers excitedly announced the discovery of a planet called Kepler 22b. Located 620 light-years away, it is the first planet found by NASA's Kepler space telescope to reside in its star’s habitable zone—a region that can support liquid water, a key requirement for life on Earth. One NASA artist took the news a step further with the illustration above, depicting an inviting blue, cloud-streaked world like our own.

Unfortunately, Kepler cannot provide that kind of detail on the more than 2,300 likely planets it has discovered around other stars. It cannot tell us if the planets are rocky, have oxygen in their atmosphere, or hold liquid water on their surface. In other words, it cannot tell us what we really want to know: Is there life beyond Earth?

In the mid-1990s, when the first exoplanets around other stars were being discovered, NASA engineers proposed missions that would attempt to address that question. One was the Terrestrial Planet Finder, a $1 billion-plus space telescope that would capture light from individual planets; spectroscopic analysis (separating the light into its different wavelengths to determine the composition of the planet’s atmosphere) would then be used to look for life-friendly molecules like water vapor, oxygen, and methane.

But NASA ran into budgetary problems, leading it to table funding for the Terrestrial Planet Finder and other such life-seeking projects. As a result, there was no obvious follow-up mission in the works when Kepler launched in 2009.

“The fiscal realities are frustrating,” says Mark Swain, an astrophysicist at the NASA Jet Propulsion Laboratory in Pasadena, California. “But at the same time, it’s an exciting challenge to figure out the best way to follow up all these amazing discoveries.”

As funding has dried up, the excitement over exoplanets has only grown stronger. Kepler’s results are compelling in the sheer number and variety of planetary finds. Other recent studies suggest that our galaxy, the Milky Way, contains more than 100 billion planets. Tens of billions of those, in turn, could have the right temperature for liquid water. The bounty of potentially habitable planets has astronomers scrambling for ways to revive the spirit of the Terrestrial Planet Finder, but on a shoestring budget.

The trick to keeping costs down is focusing on planets around relatively bright, nearby stars—the easiest ones to detect. Swain is principal investigator of the Fast Infrared Exoplanet Spectroscopy Survey Explorer (Finesse), a proposed 30-inch space telescope that would probe more than 200 planets around nearby stars to learn about their atmospheres and how they formed. The telescope would examine each star to see how its light changes as a planet passes in front of and behind it. By seeing which wavelengths are absorbed as the starlight passes through the planet’s atmosphere, astronomers could determine whether the atmosphere contains water, carbon monoxide, methane, and carbon dioxide.

Alternatively, an MIT-led group of astronomers is developing the Transiting Exoplanet Survey Satellite, or TESS, a spacecraft containing an array of telescopes that would survey the entire sky, looking for exoplanets in the habitable zone around the nearest and brightest stars. TESS would not do spectroscopy itself; that job would be left to observatories such as the Hubble Space Telescope or the upcoming James Webb Space Telescope—which will be larger and more powerful than Hubble and have a spectrograph tailored to the study of planetary atmospheres.

Last September, NASA gave Finesse and TESS $1 million each to come up with a more detailed mission concept. If either makes it into space, it will have a $200 million budget (a fraction of that of the Planet Finder rejected in 2007) and a launch date of around 2016.

Some astronomers are taking an even more bare-bones approach, skipping the large space missions in favor of networks of smaller scopes to spot nearby exoplanets.

MEarth is a $1 million planet-hunting project confined to the ground. It relies on eight identical 16-inch telescopes in Arizona to look for planets around nearby stars that are smaller and cooler than our sun. The results are passed on to more powerful telescopes to do the essential spectroscopy. In 2009 MEarth found its first planet, Gliese 1214b; earlier this year, scientists using the Hubble telescope analyzed the planet’s light and concluded that it has a dense atmosphere made up largely of water vapor, though the planet is far too hot to support Earth-like life.

Astronomer Sara Seager at MIT does plan to send telescopes into space, but the appeal of her roughly $15 million ExoplanetSat mission is that it does not require a launch of its own. Instead, her dozen or so minisatellites, each no larger than a loaf of bread, would be carried into space on rockets being used for other missions. The upper stages of these rockets contain small compartments that could easily hold Seager’s telescopes and drop them in the same orbit as the rest of the rocket’s payload. Once in orbit, each telescope would home in on a particular star of interest and search for planets around it.

Even Seager would prefer a big-money mission like the Terrestrial Planet Finder, but she wants to keep the exoplanet search rolling. Although just knowing about planets like Kepler 22b is exciting, astronomers’ dream scenario is to find life and study it up close.

“We want to lay a path for the future, so when people figure out how, they can go there,” Seager says. “We honestly believe that someday they will find a way.”

The search for alien life requires analyzing distant planets’ light to determine the makeup of their atmospheres. That is difficult to do when the planet’s pesky star, which is some 10 billion times as bright, is in the way—so NASA is designing a starshade to let the planets pop into view. A prototype under development at NASA’s Jet Propulsion Laboratory is shaped like a flower, with 20-foot-long petals (one is shown below) that together would block a star’s light by a factor of 10 billion. Proj­ect head Jeremy Kasdin says the shade could be ready to deploy accompanying a space telescope within a decade.