BICEP2 Was Wrong, But Publicly Sharing the Results Was Right 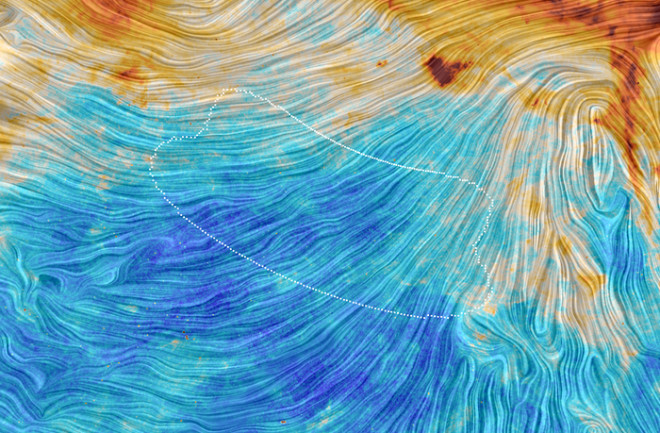 This Planck image shows that dust emission is strongest along the plane of the galaxy, in the upper part of the image, but that it cannot be neglected even in other regions of the sky. Credit: ESA/Planck Collaboration The claim made headlines worldwide, hailing one of the biggest scientific discoveries in decades. After 35 years of research, astronomers said in March, they had found evidence that the universe underwent a brief but ultra-fast expansion when it was roughly a trillionth of a trillionth of a trillionth of a second old. The research team could see a Nobel Prize looming in the distance. So they popped bottles of bubbly in celebration and shared their excitement with the world. But results confirmed today indicate that the fizz has long gone out of those findings. A second team of astronomers, which includes the initial BICEP2 team itself, used the European Space Agency’s Planck satellite to show that the twisting patterns did not come from the cosmic microwave background at all. They’re nothing but swirling patterns of dust.

Last spring’s press conference, organized by John Kovac from the Harvard-Smithsonian Center for Astrophysics and his colleagues, was abuzz with excitement. The team had used the BICEP2 telescope at the South Pole to spot twisting patterns in the cosmic microwave background, the radiation released when the first atoms formed 380,000 years after the Big Bang. The twisting patterns were allegedly the remnants of primordial gravitational waves, ripples in the fabric of space-time. But the waves not only suggested the universe’s ultra-fast expansion, they pointed to a wilder prediction: that the rapid expansion of the universe is eternal. So even as our own universe settled down to its comfortable expansion rate, the rest of the cosmos continued blowing up, giving rise to an endless number of other universes. This mind-boggling theory suggests that our universe is just one of many, some with more dimensions and different physical properties. Weeks after the initial results were released, however, other scientists began to spot holes in the team’s analysis. It didn’t take long before researchers and the news media alike criticized the team for making a premature announcement to the press before its work had been peer-reviewed for publication. Then in September, it became clear that the BICEP2 team underestimated the confounding effects of dust in our own galaxy. And today, with the European Space Agency’s confirmation, it’s official. The full data will be published in a paper on the arXiv pre-print server early next week, ESA says.

The Debate Is On

Some researchers recall the blunder with cosmic embarrassment. No one seems to mind that the results weren’t spot on, given that this happens in science all the time. Their real beef is that the BICEP2 team went live before the results had been checked over by outside experts. Although many argue that the unfounded hype harms the public’s perception of science, I think the contrary is true: this episode is actually good for science. It helps the public understand that science is a process and even see that process in action. But this idea is a strikingly new one. “If you follow the book, in science you have to be extremely careful about data – especially very controversial data – because the stakes are so high,” says astronomer Marcelo Gleiser from Dartmouth College. Although the results have no impact on our everyday lives, the stake in this case was their promise of unraveling the origins of the universe. But today it’s harder than ever to keep data under wraps. In the Internet era, unintentional leaks can quickly let the cat out of the bag – as seen in today’s own developments. In other instances, especially in the physical sciences, researchers put their papers on publicly accessible pre-print servers before any formal review, so that their results can be seen and discussed by a wider audience. Press conferences and social media further amplify this public dissemination.

The BICEP2 team strongly defends going public before publication. “We submitted the paper the day we announced it,” says team member Jamie Bock from the California Institute of Technology. “This practice is not universal but it is commonplace nowadays.” Indeed the BICEP2 team was by no means the first research group to share its results at a time that is arguably too early. In 2011 European physicists announced they had clocked a group of subatomic particles, known as neutrinos, traveling faster than the speed of light. The claim, which stood in defiance of Einstein’s special theory of relativity, was in turn publicly disputed and finally rejected. “In a way both of those episodes are large-scale, particularly visible, particularly striking, versions of what happens in science all the time,” says Philip Ball, a freelance science reporter who worked at Nature for over 20 years. But making this process more visible might have unintended consequences, contends Gleiser. A public reversal like this “harms science because it’s an attack on its integrity,” he says. “It gives ammunition for people to say, hey look those scientists don’t know what they’re talking about in cosmology and they don’t know what they’re talking about in general. People connect the dots very quickly in the public sphere.” Many researchers draw a parallel to climate change denialism, arguing that these episodes come at a time when the Earth is under threat and scientists can therefore ill-afford attacks on their integrity. “If we didn’t live in an age when one of the most important branches of science is being wholly denied by a group in society, then maybe this wouldn’t matter so much,” says Adam Frank from the University of Rochester in New York. “I don’t think science needs to change the way it operates to deal with denialism, but on the other hand we need to be careful about giving those camps fuel for the fire.”

In Support of Sharing

But the fact that science is under attack can equally support further transparency. “This kind of incident ought to be something that strengthens people’s understanding and appreciation of science rather than the reverse,” says Ball. Public discussion of findings can help people “understand that science is contingent, that it’s always making the best assessment it can on the basis of incomplete evidence.” It’s a debate that’s not settled, leaving scientists to increasingly have to decide how to handle controversial results. Do they hold back claims until they’re accepted for publication? Until they’re confirmed by another research team even? Or do they let the public listen in on a lively debate? In the end, science is a human endeavor. As such it’s flawed. This latest incident is a reminder that scientists are constantly engaged in a tightrope-walk between astonishing claims and careful deliberation. Sometimes the result rewrites the laws of physics, and sometimes it’s much more nuanced. But as a whole, science seeks to embrace mind-warping new concepts. So by revealing their initial results to the public, researchers provide an early glimpse into this thrilling quest. “It seems a shame not to share that,” says Ball.