Beyond the Outer Limits

Maps of radiation left over from the Big Bang may show traces of universes besides our own. 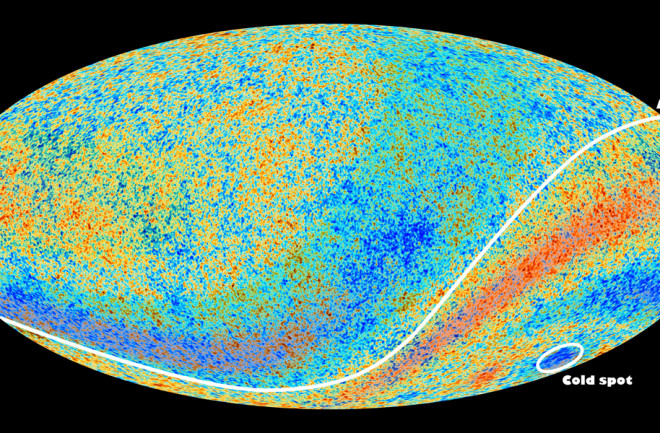 Planck’s map of the early universe shows asymmetry between hemispheres and a striking cold spot.  | ESA and the Planck Collaboration

For Laura Mersini-Houghton, it’s been a surprisingly short journey from Tirana, Albania, to the edge of the universe.

Step one came 20 years ago, when she moved to the United States as a Fulbright scholar, studying physics at the University of Maryland. Step two came a decade later, when she began exploring novel ways to merge quantum theory and cosmology. Step three arrived in May 2009 with the launch of the European Space Agency’s Planck satellite, which soon began making detailed maps of the Big Bang’s leftover radiation.

And step four? That’s happening right now. Mersini-Houghton has developed an expansive theory that explains not onlyhow our universe began, but also where: among a far grander universe of universes, the multiverse. Her concept sounds like science fiction, but she insists she was merely being logical.

“I was trying to understand the question of the origin of our universe, and I realized that the only way to address the question is by allowing a multitude of possible universes,” she says in a brisk voice.

She’s not the first scientist to take this kind of head trip. More than 50 years ago, Hugh Everett postulated an endless series of parallel universes as part of his “many worlds” interpretation of quantum physics. Recent versions of string theory, which attempts to knit together all of physics into a single set of equations, predict 10^500 different realities, each with its own physical laws. But Mersini-Houghton brings something unique: evidence.

“The power in this theory is that you have a whole series of predictions that are all starting to be observed,” she says. In the latest Planck satellite data, Mersini-Houghton sees nothing less than the outlines of other universes projected onto the sky.

You can see those spectral universes, too, once you know what to look for, if you do as Mersini-Houghton did. Check out Planck’s full-sky map and focus on anything that’s out of balance.

The Planck map shows microwave radiation emitted shortly after the birth of the cosmos. It is covered with spots and blobs, indicating places where the infant universe was either denser or less dense than average. The dense spots are what gave rise to structure in the universe, from superclusters of galaxies down to stars and planets. (In case you’re wondering, the relatively sparse areas evolved into enormous voids with few galaxies.) So far, so good. If there were no structure in the early universe, we wouldn’t be here.

Trouble starts when you pull back and take in the big picture. Scientists have long believed that the universe as a whole must be the same in all directions. The laws of physics are symmetric, after all, so the universe should be as well. Einstein even enshrined that idea as the “cosmological principle.” But the Planck maps are not nice and uniform — not even close.

Look closely, and you’ll notice two major signs that something’s off-kilter. First, the northern half of the sky looks substantially lumpier than the southern half. Second, the southern part of the sky sports a large “cold spot” where the cosmic microwaves are less energetic than average. If you run statistics on the Planck data (don’t worry, someone already did this for you), you’ll discover a third oddity: The universe is distinctly less lumpy on large scales than it should be, according to standard cosmology models.

I asked George Efstathiou, a veteran astrophysicist at the University of Cambridge and a key member of the Planck science team, what he makes of these anomalies. “You’d have to admit that the universe looks a bit odd,” he agrees. “The question is, how odd? My own assessment is that it’s odd at the 1/20 level.” That means there’s a 1 in 20 chance that we are simply seeing the effects of random variations.

Flip it around, and there’s a 19 in 20 chance that there is some funny business going on.

The reason the universe looks odd to us, Mersini-Houghton thinks, is that cosmologists have been starting from a faulty assumption: that our universe is the one and only. “Whenever we get something that doesn’t make sense, we have oversimplified the system,” she says. “If you consider the possibility of other universes, you can still have a universe that is uniform, but then there is something else creating anomalies.”

She traces those anomalies back to a fraction of a fraction of a second after the Big Bang, when our universe was so small that it behaved like a subatomic particle, dominated by quantum physics. Such particles can get intertwined, or “entangled,” so that their physical properties remain linked even if they move huge distances apart.

Mersini-Houghton theorizes that our entire universe became entangled with others during its formative moments. The features in the Planck map are the lingering result. “If I look in one direction in the sky, I see a wave that corresponds to a particular type of universe,” she says. “If I look at another direction, I see a different wave with a different energy.”

Take away the esoteric physics language, and Mersini-Houghton’s theory boils down to a simple, startling idea: The oddities in the Planck maps are like cosmic belly buttons that trace an ancient umbilical connection between our universe and other universes that have grown up and gone their separate ways.

With such an extraordinary claim, I call on Efstathiou, a no-nonsense seasoned observer, for a reality check. “It’s a novel idea; very speculative physics but completely plausible,” he says brightly. “The question is, what can we do? Is there an observational way of testing the multiverse?”

Efstathiou is busily answering his own question, sifting through the rest of Planck’s enormous data archive. By the end of the year, he and the rest of the Planck team will release an improved, far more complete description of the north-south asymmetry, the cold spot, the missing large-scale structure and other currently inexplicable deviations in the cosmic microwave background. “Then maybe these hints of something will turn into a compelling case. That would certainly make my day,” he says.

Out of Many, One

No matter what the Planck team finds, Mersini-Houghton is convinced that other universes must exist. Maybe her particular theory is not correct; maybe the other universes aren’t detectable for now. But on the deepest theoretical and philosophical level, she thinks that the traditional concept of a single, lonely universe makes no sense.

Current cosmology models indicate that our universe was born with an extremely high initial energy, Mersini-Houghton notes; otherwise it would have fizzled out as soon as it began. That specificity gnawed at her, especially after she heard physicist Roger Penrose calculate that the odds of it happening by chance were an absurd 1 in 10^127. “I wondered, ‘Why should we have had such a special start?’ That’s been a big problem in physics.”

The multiple-universe theory is her solution. She pictures a vast landscape, far grander than the visible universe, in which the natural fluctuations of quantum physics drive endless random energy variations. Any one of those fluctuations can spawn a universe, but the weak ones go nowhere; they appear and die away without a trace. Only the rare, high-energy fluctuations produce viable Big Bangs and keep going. Successful universes like ours would inevitably come to dominate. That problem of specificity vanishes.

Mersini-Houghton places this new conception of the universe in the context of the discovery that Earth is one of many planets, the sun one of many stars, the Milky Way one of many galaxies. For her, the multiverse is the next step away from the primitive idea of cosmic uniqueness and toward grander enlightenment. Who knows where the next steps might lead?