Betelgeuse is Dimming and Changing Shape, New Image of Its Surface Reveals

The nearby red supergiant has been dimming for a while now, but its exact fate is still unknown. 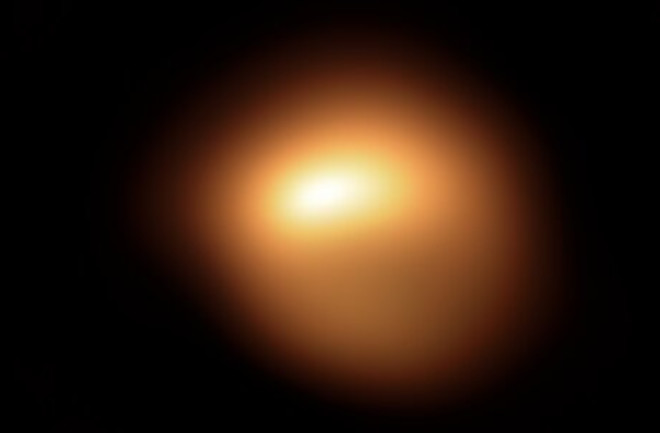 A new image of the star shows it's dimming and changing shape. (Credit: ESO)

Betelgeuse, a red supergiant located roughly 700 light-years away in the constellation Orion, has been dimming over the last few months. But now, astronomers have found it's also changing shape.

In a new image captured with the European Southern Observatory’s Very Large Telescope (VLT), astronomers captured how much the star has dimmed compared with a picture taken late last year. And when they saw the before-and-after images, they noticed that Betelgeuse has also changed its shape.

Betelgeuse’s dimming, which began in late 2019, is noticeable even with the naked eye. The star, which is often a popular anchor for observers, is currently only about 36 percent its normal brightness.

The big question surrounding Betelgeuse is whether this fading is a sign the star will go supernova soon. One day, the red supergiant will explode, but scientists don’t think that’s happening quite yet.

“Of course, our knowledge of red supergiants remains incomplete, and this is still a work in progress, so a surprise can still happen,” said Miguel Montargès, an astronomer studying Betelgeuse with the VLT, in a press release.

An exact answer to when Betelgeuse will go supernova is still lingering, but after the star explodes, there’s a good chance it’ll become a neutron star. There’s a small possibility it could become a black hole, but the chances are slim.

For now, Betelgeuse’s future remains a mystery. Too bad we can’t keep it around by saying its name three times in a row.